[+]Enlarge
Credit: BeaconPower
An energy-storage flywheel and housing are lowered into a test cell at Beacon Power’s manufacturing facility in Tyngsboro, Mass. 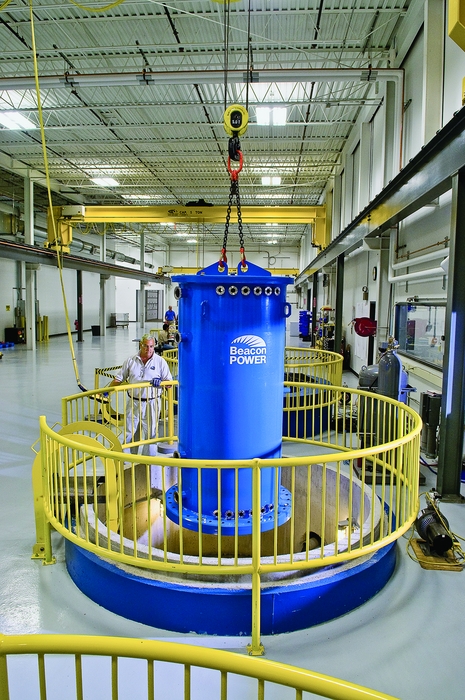 Credit: BeaconPower
An energy-storage flywheel and housing are lowered into a test cell at Beacon Power’s manufacturing facility in Tyngsboro, Mass.

A second Department of Energy loan guarantee recipient has gone bust. Beacon Power, a Massachusetts-based developer and manufacturer of flywheels to provide backup electricity to the grid, filed for bankruptcy protection on Oct. 30.

Unlike Solyndra—the much-discussed bankrupt solar manufacturer, which began auctioning off its plant and equipment last week—Beacon Power will continue operating, although its stock value has plummeted and all employees have agreed to a 20% wage cut.

Beacon’s announcement came days after the Obama Administration said it will conduct a 60-day audit of the DOE loan program and its portfolio of $36 billion in loans and guarantees.

In a statement, White House Chief of Staff William M. Daley said the independent audit will be led by Herbert M. Allison Jr., who oversaw the Troubled Asset Relief Program and who led mortgage provider Fannie Mae after it entered conservatorship.

Allison is likely to enlist a team of outside experts, Daley said, and will examine enhancements and an early warning system for the loan program.

“President Barack Obama remains committed to clean energy investments,” Daley stressed, “because he understands these technologies will either be created here or in other countries.”

DOE stood behind Beacon Power and its flywheel technology, which supplies electricity to stabilize grid power and mitigate load fluctuations. Flywheels are “charged,” DOE explains, using surplus electricity and then “discharged” to spin turbines and generate electricity for the grid when demand exceeds supply.

The Energy Department attributed Beacon Power’s failure in part to the declining price of natural gas, which is also used to provide backup electricity.

DOE provided $43 million in loan guarantees to Beacon Power to build a flywheel technology demonstration facility in New York. The plant is complete, says company spokesman Gene Hunt, and has drawn down $39.5 million of the loan guarantee. In addition, the company received a $24 million DOE grant to build a similar facility in Pennsylvania but has used little of that money. It also won a $2.25 million award through DOE’s Advanced Research Projects Agency-Energy for further R&D.

Meanwhile, the House Energy & Commerce Committee’s Republican leadership is continuing to investigate Solyndra and DOE’s loan guarantee program. The committee has ordered the Administration to turn over all material since Obama first took office that relates to the program and the Solyndra loan guarantee, but the White House has refused.

In a letter to the committee, Kathryn H. Ruemmler, counsel to the President, said some 70,000 pages of internal documents have already been given to the committee, and Administration staff have attended nine committee briefings as well as testified at many committee hearings. She added that the most recent House committee request carries significant confidentiality concerns for the President.

Late last week, however, on a 14 to 9 party-line vote, the committee gave Chairman Fred Upton (R-Mich.) the authority to subpoena all internal White House material that pertains to Solyndra. The committee also announced Energy Secretary Steven Chu will testify Nov. 17 on the loan program.