A Nanocar With Four-Wheel Drive

[+]Enlarge
Credit: Courtesy of Ben Feringa
A model of a single-molecule car that can advance across a copper surface whenelectronically excited by an STM tip. 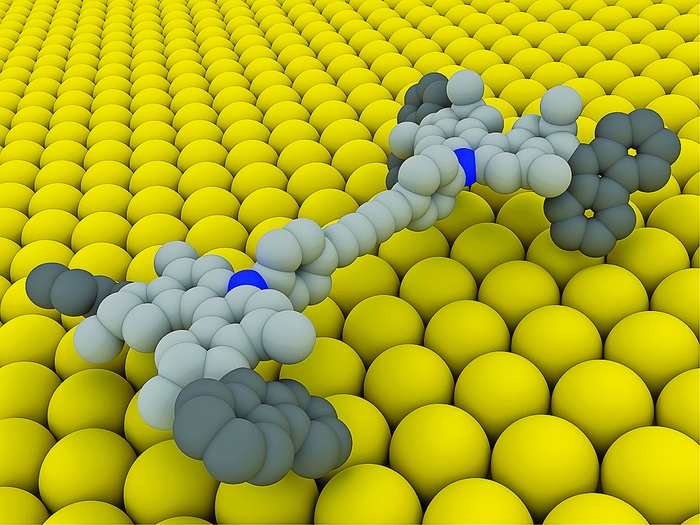 Credit: Courtesy of Ben Feringa
A model of a single-molecule car that can advance across a copper surface whenelectronically excited by an STM tip.

A new electric car is driving off the lot. Because it’s only a few nanometers long and operates at a chilly 7 K (about –447 oF), this little automobile is unlikely to cause any sleepless nights for electric car makers. Even so, it’s pretty souped-up as nanocars go, boasting four molecular motor moieties that propel the tiny vehicle along a copper surface with a paddle wheel motion (Nature, DOI: 10.1038/­nature10587).

Previous nanocars either simply diffused along a surface or had to be towed by the tip of a scanning tunneling microscope (STM). This new single-molecule coupe moves when an STM tip fires electrons at it, prompting isomerization of the double bonds in its molecular motor “wheels.” The unidirectional motors combined with their stereochemical arrangement on the molecule make the nanocar putt-putt along. With 10 shots from the STM, the nanocar moves 6 nm forward.

The driving force behind the project was the desire to figure out how to get an entirely synthetic, single-molecule system to move on its own across a surface, says Ben L.Feringa. The chemistry professor at the University of Groningen, in the Netherlands, spearheaded the research effort along with Groningen colleague Syuzanna R. Harutyunyan and Karl-Heinz Ernst of the Swiss Federal Laboratories for Materials Science & Technology.

“At the moment I would not consider the system to have any practical application,” Feringa tells C&EN. “However, thinking about future applications, this is a small but significant step forward. Ultimately, nanomachines and devices like sensing and delivery systems need to be powered. For that, molecular motor s will be required. Probably future designs will be different from what we show here, but we have to demonstrate the fundamental principles.”

James M. Tour, the Rice University chemistry professor who made the first nanocar, says the new car “will certainly propel the field to a higher level of sophistication.” Eventually, he suggests, such synthetic molecular machines could be used for controlled transport and ex vivo bottom-up assembly, in much the same way that enzymes conduct in vivo assembly.

Feringa’s plans for the little car are more modest. “The key next step will be to demonstrate this type of movement in ambient conditions: room temperature and ambient pressure,” he says. “This is a real challenge as we have to balance the interactions with the surface to a much larger extent.” Getting control over the delicate balance between surface interaction and movement is a major goal, Feringa says. “We also have to make defined trajectories, see if we can transport cargo, and make a setup where we can demonstrate similar movement using light as the energy source,” he adds.

Molecular Machines
Molecular motor turns rotor
Materials
Nanocar Research Kept Rolling Along
Physical Chemistry
Friction Measured A Few Atoms At A Time
Share X
To send an e-mail to multiple recipients, separate e-mail addresses with a comma, semicolon, or both.
Title: A Nanocar With Four-Wheel Drive
Author: Bethany Halford
Chemical & Engineering News will not share your email address with any other person or company.