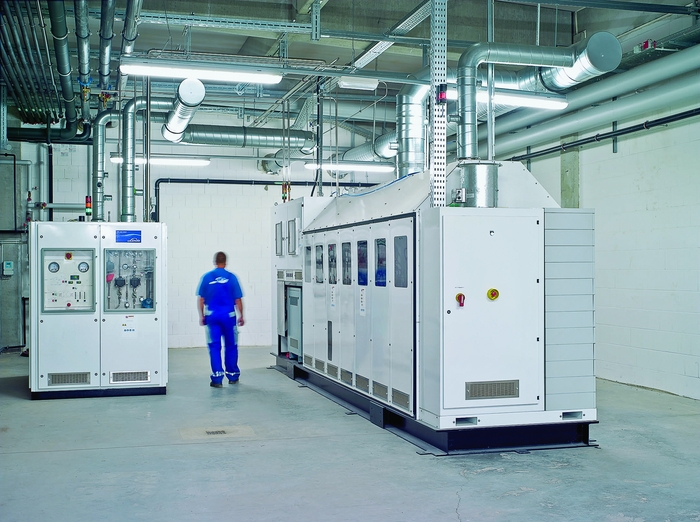 Credit: Linde
Linde installed this fluorine generator at a Schüco facility in Germany.

At a Schüco photovoltaic module complex in the town of Großröhrsdorf in the former East Germany, Linde has started building what it says will be Europe’s largest electronics-grade fluorine plant. And in Inju City, South Korea, the industrial gases firm is constructing a $3.5 million facility to produce F2 generators, including the ones that will be installed at the German site.

GROWTH MARKET
[+]Enlarge
Industrial use of NF3 this year will be nearly six times what it was in 2003.a Estimate. SOURCE: Techcet 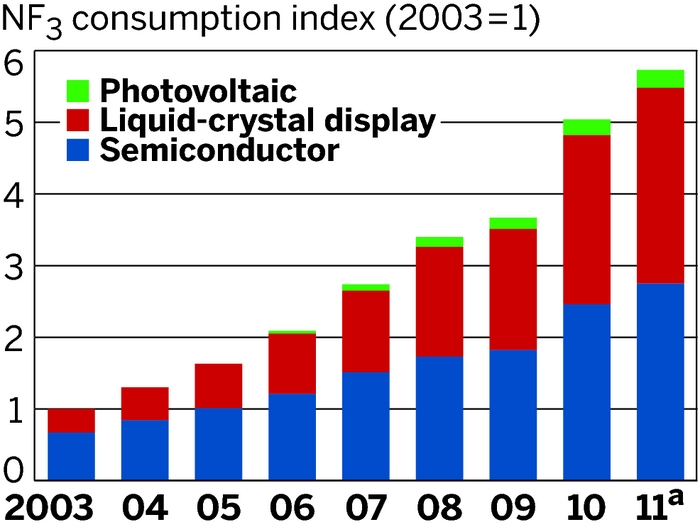 Industrial use of NF3 this year will be nearly six times what it was in 2003.a Estimate. SOURCE: Techcet

The investments are part of an effort by several chemical companies to replace nitrogen trifluoride in the electronics industry with a more environmentally friendly gas. Other initiatives include plans by Belgium’s Solvay and Japan’s Showa Denko to enter the market for NF3 alternatives. Even Air Products & Chemicals, a leading NF3 maker, has gotten into the fluorine generation business.

But the evidence so far is that replacing NF3 will be an uphill battle. NF3 is good at what it does, and it is entrenched in complex manufacturing schemes that electronics companies are loath to alter. Indeed, although F2 has competed with NF3 for many years, it still commands only a sliver of the market.

“The electronics industry is extremely resistant to change, particularly when introducing a new material—no matter how large the benefits,” acknowledges Carl Jackson, head of the fluorine business at Linde Electronics.

NF3 plays a small but critical role in the fabrication of three kinds of electronics: semiconductors, liquid-crystal displays, and certain photovoltaic modules. One step in the creation of these devices is the application of thin films of silicon-containing materials by misting them down in a chemical vapor deposition, or CVD, chamber.

After a number of rounds of deposition, the CVD chamber starts to become clogged with stray silicon that must be removed. Physical scrubbing works, but a more efficient technique is to pipe in fluorine radicals, generated from a fluorine-containing compound. The radicals react with the silicon to create silicon tetrafluoride gas, which can be vented away.

Often technology leaders, semiconductor makers were the first to adopt this method of chamber cleaning. In the industry’s early days, perfluorinated compounds (PFCs) such as hexafluoroethane were the preferred fluorine source, but scientists eventually realized that such compounds were potent greenhouse gases that were contributing to the trapping of heat in the atmosphere. PFC emissions were targeted for reduction under the 1997 Kyoto protocol on climate change.

The U.S. didn’t adopt the protocol, but around the same time the U.S. semiconductor industry signed an agreement with the Environmental Protection Agency aimed at reducing PFC emissions. In 1998, IBM researchers at a semiconductor plant in Vermont developed a new chamber-cleaning process that used NF3 in place of hexafluoroethane.

Scientists knew that NF3 was a greenhouse gas with a global-warming potential some 17,000 times that of carbon dioxide, versus 12,000 times for hexafluoroethane. But NF3 isn’t regulated by the Kyoto protocol because little of it was thought to be escaping into the atmosphere. Unlike PFCs, almost all NF3 was believed to be destroyed during the cleaning process.

Others followed IBM in adopting NF3. Within a few years, it went from being a niche gas with annual sales of a couple hundred tons to a global commodity. By 2005, production was close to 3,000 metric tons. World production this year will be about 12,000 metric tons, estimates Tim Maykut, product manager for NF3 and fluorine at Air Products.

Today, Maykut says, semiconductor fabrication accounts for about 40% of NF3 sales. Thanks to the public’s insatiable appetite for big-screen televisions, the fastest-growing NF3 market is thin-film transistor liquid-crystal displays (TFT LCDs), which make up about half of sales. Thin-film photovoltaics such as the ones Schüco makes in Germany are the other 10%.

Linde started offering fluorine as an alternative to NF3 in CVD chamber cleaning about a decade ago. For most of that time, the German firm promoted F2 mainly as a more efficient and economical way of generating the fluorine radicals needed for cleaning.

Then in 2008, researchers from Scripps Institution of Oceanographyreported that atmospheric levels of NF3 were much higher than industry had been estimating (Geophys. Res. Lett., DOI: 10.1029/2008GL035913). Companies had figured that only a few percent of the gas was escaping during production and use. But the atmospheric levels found by the Scripps researchers translated into fugitive emissions of as much as 16% of production.

Air Products says its own NF3 operations are quite airtight. A study published by company researchers last year found that only 1.7% of the firm’s NF3 output was lost during its life cycle—1.6% during production at its main plant in Hometown, Pa., and 0.1% during use in modern photovoltaic CVD chambers (Environ. Sci. Technol., DOI: 10.1021/es100401y). Since those results were tabulated, the company has reduced plant emissions to about 0.5%, Maykut says, although he acknowledges that other producers and users may not be so conscientious.

Calls for regulation of NF3 have been growing since the Scripps study. The industry-sponsored International Technology Roadmap for Semiconductors lists NF3 and other PFCs as having “medium restriction potential.” Last year, EPA put out new greenhouse gas reporting rules that cover NF3. Reporting is scheduled to start in March 2012.

Linde’s Jackson says he has seen renewed interest in F2 since the Scripps paper. Given NF3’s exclusion from the Kyoto protocol and the lack of government regulations, no law currently restricts its use. “But this will not always be the case, and we have seen movement by environmentally progressive companies, particularly in Germany and Korea, to tackle the issue ahead of regulatory requirements,” he says.

One of those firms is Schüco, Germany’s largest thin-film silicon photovoltaics maker. After the installation of Linde’s F2 generators in Großröhrsdorf in the third quarter of 2012, Schüco says its use of NF3 will end. Assuming NF3 loss during production and use is 10%, the switch will reduce the firm’s emissions by 103,200 metric tons of CO2 equivalent per year, according to Linde.

Sensing momentum, other companies are following Linde into the NF3 replacement market. Solvay announced in August that it will test an on-site electronics-grade fluorine generator at its site in Onsan, South Korea. After testing, the firm says, the 100-metric-ton-per-year unit will be installed at a customer site.

Air Products started offering its own on-site generators three years ago, according to Maykut, based on the technology it already uses to produce fluorine at several of its sites around the world. Although the company doesn’t have customers yet, it is pursuing the market aggressively, he says, based on a cost-savings argument.

Maykut says NF3 is the most economical cleaning gas for small operations. But at current prices, a customer using 500 metric tons of NF3 per year could save about $3 million by switching to on-site F2. “If you use 2,000 metric tons of NF3, you could save approximately $24 million per year with on-site fluorine,” he says. “Savings are significant—and they need to be to offset the perceived risk of changing materials.”

They are compelling figures, but to date few electronics companies have been swayed by them. By Maykut’s calculation, global F2 consumption in chamber-cleaning applications totals no more than 200 metric tons per year, less than 2% of the NF3 market. Jackson acknowledges that Linde’s market share is low, although he says sales are growing at a rate “far higher” than that of the overall cleaning gas market.

Semiconductor maker Texas Instruments has considered fluorine as a means of reducing greenhouse gas emissions, according to Tim Yeakley, an environmental, safety, and health strategy manager. But so far the firm is sticking with NF3, which helped the company reduce emissions in past conversions from PFCs. “We are not yet satisfied that fluorine systems currently available are a good match for the manufacturing equipment we currently use,” he says.

Lita Shon-Roy, managing director of the electronic materials market analysis firm Techcet and a former Air Products business development manager, has been tracking NF3’s rise for the past decade. She anticipates a tough fight for F2.

One reason is that the decline of NF3 prices over the period has made the economics of F2 less compelling. In 2000, she says, NF3 was a specialized material that sold for upward of $100 per lb. By 2007 it was between $30 and $40 per lb, and today it has dropped to $20 or even less for high-volume purchasers.

Shon-Roy sees little chance of picking up new customers in the relatively mature semiconductor industry. For the cost-conscious TFT LCD sector, it all depends “on whether it can save them money,” she says. Shon-Roy sees the best chances for NF3 in the thin-film solar industry. The trouble there is that business is slumping at the moment because of rock-bottom prices for competing solar cells made of crystalline silicon.

It’s for such reasons that while Air Products promotes F2 generators, it is also backing NF3. And it’s a business that is expanding. In September, the company announced plans to more than double NF3 capacity at its facility in Ulsan, South Korea. Maykut says the project reflects the reality that “NF3 is still the design basis for chamber-cleaning applications and will be for the foreseeable future.”