Merck sees pipeline strength getting it through a challenging 2012 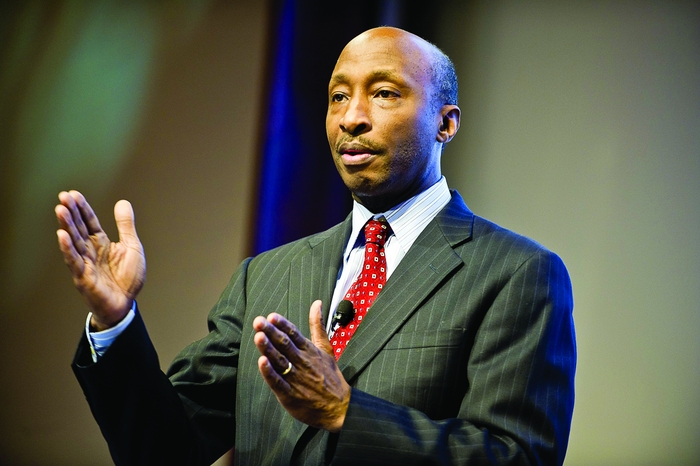 Credit: Merck
Frazier says Merck’s strategy is driven by breakthroughs in the lab.

Taking the stage at Merck & Co.’s first R&D day since the company’s acquisition of Schering-Plough in 2009, and his first since becoming chief executive officer, Kenneth C. Frazier led with his commitment to the firm’s tradition of “science excellence and innovation.” He followed with a bit of red meat for the analysts in attendance, announcing to general applause the board’s approval of an 11% increase in Merck’s quarterly dividend.

Not a shocking opener for such an event, where the financial yardstick is prominent in measuring progress in the laboratory. Nor does Merck find itself in a unique position this year. Like the world’s largest drug company, Pfizer, Merck is completing the integration of a large acquisition and facing patent expiration of its top-selling drug. Singulair, with annual sales of nearly $5 billion, comes off patent next August.

Merck has managed to reduce operating costs in the merger with Schering-Plough by $2.8 billion but not without making big cuts in research and other operations. A 30% postmerger headcount reduction, amounting to 30,000 job cuts worldwide, is in the works. The company closed nine research sites shortly after the acquisition, leaving it with 15.

Frazier reported 5% sales growth, year to date, with sales for the third quarter reaching $12 billion, an 8% increase over the same period in 2010. He said Merck hopes to maintain revenue next year despite the loss of Singulair, pointing to the company’s new-drug pipeline as its primary growth engine.

“We continue to make significant progress on our strategy to drive growth from our existing portfolio and to bring forward breakthrough medicines and vaccines that address unmet medical needs,” Frazier said.

Merck’s R&D engine paid off this year as the company logged five drug approvals and filed another five drugs with the Food & Drug Administration for approval. An additional eight candidates are scheduled for filing by 2013. With 19 drug candidates in Phase III clinical trials, Frazier said, the company is broadening its focus from first-in-class drugs to include best-in-class drugs, “molecules that the market will differentiate favorably.”

Kim presented a detailed explanation of the company’s R&D life-cycle management strategy, which charts net present value against net present cost of research projects. Merck has cut more than $600 million from its R&D spending since 2009 while continuing to fund key programs, Kim said.

The firm remains committed to its consumer care and animal health businesses, Frazier said, a point of departure from Pfizer and some other big pharma companies. He declared he is open to targeted acquisitions and partnerships to advance the company’s position in emerging markets. Merck’s partnership with South Korean firm Hanwha was presented as a key to its pursuit of biosimilars, or generic biologics. The firms are working on a biosimilar version of Amgen’s anti-inflammatory drug Enbrel.

As Merck focuses on its pipeline, it is also adapting its business model to changes in the health care market, some brought on by new policies in the U.S. and elsewhere, Adam H. Schechter, president of global human health, told attendees. In addition to shifting its emphasis from mature markets to emerging ones, its marketing and product development orientation is shifting from direct sales to physicians to payers and health care regulators. With changes in reimbursement channels, “new products must exceed current standards of care,” Schechter said.

Stock analyst Les Funtleyder, health care strategist with Miller Tabak & Co., told clients in a report that he was impressed with several drugs in Merck’s midterm pipeline, including the oral, once-weekly version of Januvia. He says he is less enthusiastic about the company’s cardiovascular franchise. Indeed, Merck announced three days after the R&D conference that its experimental heart therapy, vorapaxar, failed to meet a study goal in one of two clinical trials under way.

Funtleyder questions Merck’s commitment to animal health, which he felt was downplayed in the presentation, and he told C&EN that the jury is out on how much traction Merck is getting in emerging markets. But he noted in his report that he is impressed by the 11% increase in Merck’s dividend, viewing it as a sign that the company is confident in its performance, both in 2011 and looking into 2012.

Frazier underscored that confidence by evoking the company’s heritage. “Fun­damentally, Merck is about translating cutting-edge science into medically important medicines and vaccines that save, extend, and improve lives,” he said. “Our strategy is based on innovation being the single biggest driver of value over the long term for patients, customers, and shareholders.”