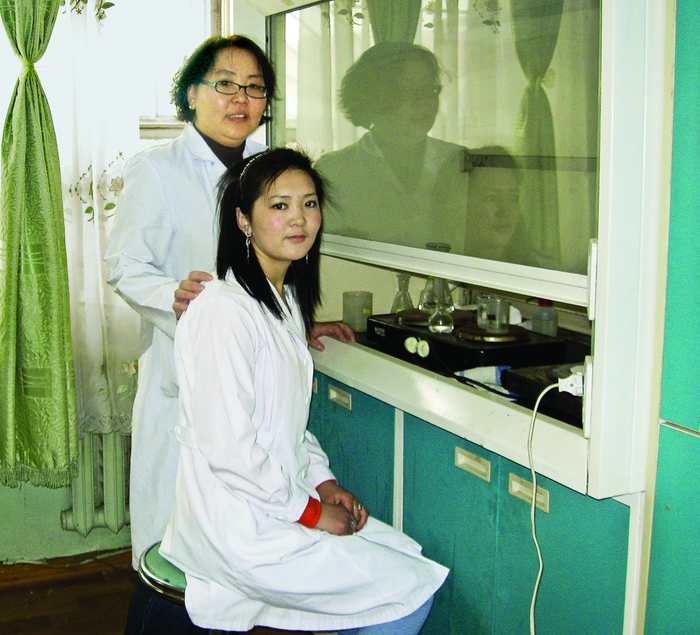 Bordered by China and Russia, Mongolia is often overlooked. A country better known for its vast grasslands and nomadic culture, Mongolia is rarely a place people think of when it comes to advancements in science and technology. 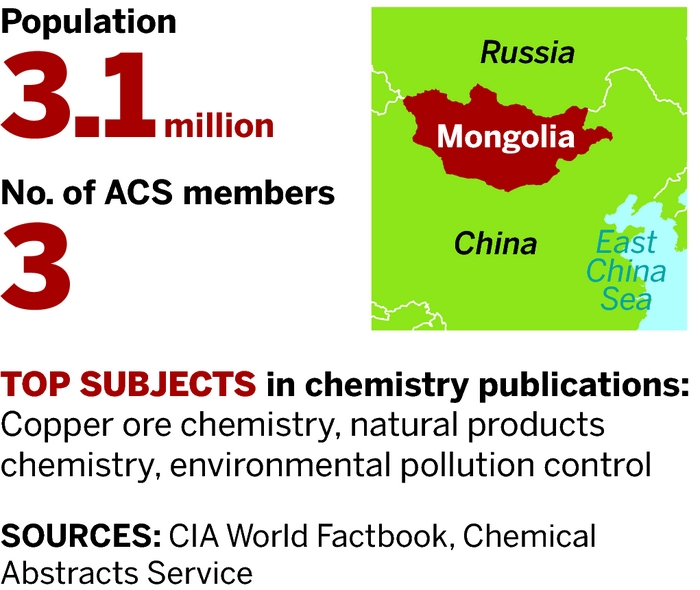 But a growing awareness of its abundance of rare-earth metals and recent investments by the Mongolian government to strengthen its capacity in science and technology are giving the country a better chance at competing on a global scale.

At the National University of Mongolia (NUM), Ulaanbaatar, chemistry professor Munkhtsetseg Baatar is investigating the chemistry of rare-earth metals. One of her projects involves the separation and purification of cerium oxide and lanthanum oxide from synchysite, a rare-earth carbonate mineral collected from the Lugiin Gol deposit in southern Mongolia. Lanthanum oxide is used to develop ferroelectric materials, and cerium oxide is often used in ceramics. In another project, Baatar is using rare-earth ores to synthesize nanoclusters.

“Rare-earth elements and their oxides are crucial to modern manufacturing,” she says. “Mongolia has many polymetallic and rare-earth ore deposits.” Baatar hopes that research into the separation of these rare-earth elements will help strengthen the Mongolian economy.

Baatar fell in love with chemistry at a young age. She had initially wanted to become a doctor and needed to take chemistry as a requirement. But Baatar enjoyed studying chemistry so much that she went on to earn a bachelor’s degree in chemical technology and ecology in 1997 and a master’s degree in chemistry in 1999, both from Ulaanbaatar University. From 1997 to 2010, she taught at the university as a chemistry instructor. While there, she also worked on her Ph.D. in chemistry, which she earned in 2010. Later that year she attained her current position at NUM Ulaanbaatar.

Chemistry is a popular subject among female students in Mongolia. Baatar recalls that in her high school chemistry class of 29 students, 27 were female. Likewise, in one of the chemistry lectures she is teaching this year, 22 of the 26 students are female. Baatar can’t explain why so many women in Mongolia study chemistry, but she observes that men tend to prefer fields such as math and computer science.

She says many students choose to study abroad, and some leave Mongolia altogether. To retain its talent pool, the Mongolian government has begun to invest heavily in building the country’s science and technology capability. In 2007, the government, with support from the United Nations Educational, Scientific & Cultural Organization, adopted the “Science and Technology Master Plan of Mongolia, 2007–2020.” The plan is intended to help develop advanced technology, use science capacity and resources as a source for economic growth, establish an effective innovation system, and promote the sustainable development of the R&D sector.

Because access to modern instrumentation is still very limited in Mongolia, Baatar frequently collaborates on projects with scientists from countries such as Japan, China, and South Korea. “It’s difficult for us,” she says. “We don’t have many good instruments. People try to do their best.” Baatar notes that NUM recently obtained its first scanning electron microscope, and she is applying for grants to purchase other instruments.

She is interested in collaborating on projects with chemists in the U.S., which is one reason why she joined the American Chemical Society in 2010. Baatar, who is also a member of the Mongolian Chemical Society, says she would like to serve as a bridge between the two societies to help facilitate collaborations between U.S. and Mongolian chemists.

Baatar networks with her colleagues from around the world by participating in scientific conferences such as the Asian Conference on Coordination Chemistry and the Rare Earth Research Conference. She also maintains a presence on Facebook and LinkedIn. She hopes to attend an ACS meeting someday. But in the meantime, she stays connected with other ACS members through the society’s journals and free webinars. “Maybe we can exchange ideas and work together,” she says.

Policy
Building Global Relationships
Careers
ACS Boosts Its Global Presence
Careers
State Of Science
Share X
To send an e-mail to multiple recipients, separate e-mail addresses with a comma, semicolon, or both.
Title: Mongolia
Author: Linda Wang
Chemical & Engineering News will not share your email address with any other person or company.