[+]Enlarge
Credit: J. Am. Chem. Soc.
A multistep method distinguishes among three ways proteins can interact with one another in membranes. Proteins are red and blue, showing N- and C-termini. 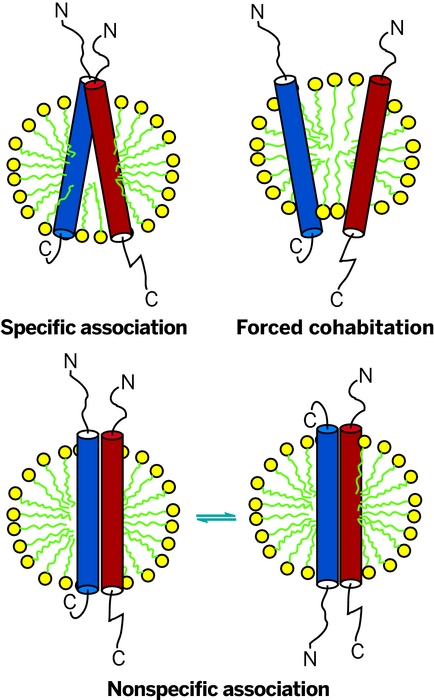 Credit: J. Am. Chem. Soc.
A multistep method distinguishes among three ways proteins can interact with one another in membranes. Proteins are red and blue, showing N- and C-termini.

A three-step method developed by researchers at Vanderbilt University should enable scientists to more rigorously study the interactions between cell-membrane proteins through solution-phase NMR (J. Am. Chem. Soc., DOI: 10.1021/ja208972h). Such interactions underpin the vast amount of biological chemistry that occurs within the membranes of viruses and cells.

When researchers use NMR to study protein-complex formation in cell-membrane mimics called micelles, they run the risk of misinterpreting shifts in the spectra. For instance, protein A and protein B might just appear to be associating because the micelles confine them in close quarters. Or perhaps the proteins are interacting nonspecifically, through transient hydrophobic interactions.

Using any one of the new strategy’s three steps wouldn’t tell the whole story, says team leader Charles R. Sanders. But together they draw a unified picture about what is going on between the proteins, he says.

In the first step, the researchers titrate an isotope-labeled protein B with protein A. This experiment determines whether A and B are interacting in some way. In the second step, Sanders’ group looks at proteins A and B interacting, as well as B interacting with itself, by varying the ratio of micelle to protein. This study indicates how strongly A and B interact with each other, Sanders says.

In the final step, the team attaches paramagnetic spin labels to two different parts of protein A and looks at how those labels broaden the NMR peaks during interaction with isotope-labeled protein B. This study yields further information about the complex’s architecture and confirms that the interaction between the two proteins is specific.

Using these three steps, the team learned that CD147, a membrane protein involved in cellular development, forms a specific, albeit weak, complex with the C-terminus of the transmembrane domain of amyloid precursor protein (APP). This macromolecule is processed into the amyloid-β peptide that plays a central part in Alzheimer’s disease. CD147 has been shown to reduce levels of amyloid-β in the past, but it was not known whether the protein interacts directly with APP until now.

The fundamental techniques for studying molecular interactions with NMR have been around for a long time, says Stanley J. Opella, a chemist at the University of California, San Diego. The Vanderbilt study puts those NMR techniques together in a way tailored for investigating weak protein interactions in membranes, he adds.