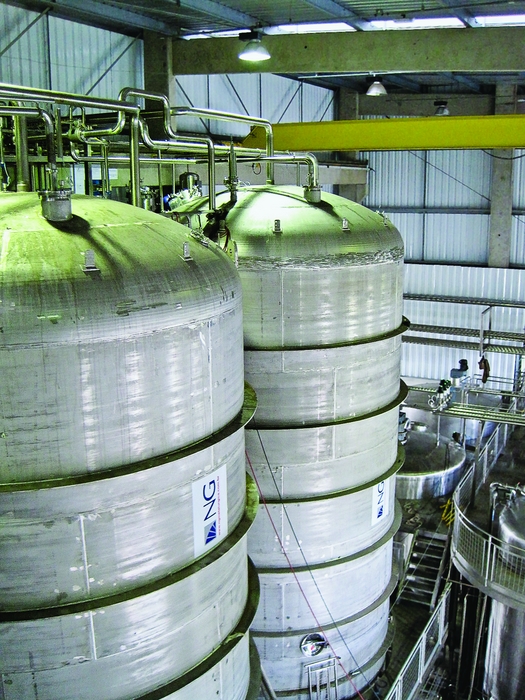 All start-up firms in green chemistry dream big, but few dream quite as big as Amyris. Officials at the Emeryville, Calif.-based company want to be known for more than just their flagship product, farnesene. “We see ourselves doing to the materials and the fuels industry what Genentech did to pharma by industrializing biotechnology,” says Chief Operating Officer Mario Portela.

The firm does more than dream big. By the standards of start-ups, Amyris, which only this past quarter delivered its first truckload of farnesene, already is big. The company employs 467 people and, with its partners, has invested more than a half-billion dollars in its yeast fermentation platform.

Amyris has already succeeded in lining up big-time backers and partners. Its initial public offering in September 2010 fetched $86 million in net proceeds. It has amassed partnerships with the likes of Total, Michelin, Procter & Gamble, and Givaudan, as well as with top Brazilian sugarcane processors that can supply it with feedstocks. If all goes according to plan, by the end of 2012 Amyris and its partners will be making farnesene commercially at four locations across three continents.

Amyris began as most green chemistry start-ups do: in a lab. In its case the lab was run by Jay D. Keasling, a professor of chemical and biomolecular engineering at the University of California, Berkeley. In the late 1990s, Keasling’s group was using Escherichia coli fermentation to produce a wide range of terpenes via an isoprenoid metabolic pathway.

Amyris, based on Keasling’s technology, was spun off from UC Berkeley in 2003. At the end of 2004, the Bill & Melinda Gates Foundation awarded Amyris, UC Berkeley, and the Institute for OneWorld Health a $42.5 million grant to develop a practical route to synthetic artemisinin, a compound that is used to treat malaria but is difficult to procure consistently because it is extracted from wormwood.

“We focused on the artemisinin project for the first year-plus,” recalls Neil Renninger, an alumnus of Keasling’s group and chief technology officer of Amyris. The technology has since been licensed to Sanofi, which may have the drug ready for distribution on a profit-free basis as early as next year.

By 2006, Renninger and Amyris’ other founders wanted to transform Amyris into a for-profit company. The firm had already transitioned its technology to a yeast-based platform, which Renninger says is more robust for industrial-scale fermentation than one based on E. coli because it isn’t as susceptible to infection.

By genetically manipulating the yeast, the company can churn out a nearly limitless variety of terpenes. Renninger says yeast can conceivably produce limonene, carotene, menthol, and other molecules.

This versatility was at the heart of the sales pitch that Amyris’ founders made to potential venture capital backers. They emphasized all that they could make with their isoprenoid pathway, including pharmaceuticals, nutraceuticals, polymers, surfactants, industrial chemicals, and fuels.

It was the fuels, Renninger recalls, that most piqued the curiosity of potential funders. “It was 2006, biofuels were of great interest at that point,” he says. Amyris won the backing of top-shelf cleantech venture capital firms such as Khosla Ventures and Kleiner Perkins Caufield & Byers.

Amyris plunged into biofuels. “We started from scratch from first principles and asked, ‘What makes a good diesel?’ ” Renninger says. Researchers could choose from many terpenes that had the 15 carbons that mimic diesel. They homed in on farnesene, largely because its modest branching offers a low-enough melting point for good low-temperature performance. The diesel fuel itself is made by hydrogenating the many unsaturated bonds in the molecule.

Amyris chemists thought it was wasteful to use farnesene only as a fuel. “These guys were sitting in the lab, watching us take this beautiful molecule, with lots of chemical handles on it, saturate those chemical handles by hydrogenating the molecule, and then burn it,” Renninger says. “That’s the least valuable thing you can do with the molecule.”

Among the first alternative uses the chemists came up with is a coupling reaction to make squalane, a potent moisturizer used in high-end cosmetics. The primary source of squalane is shark liver oil, prompting cosmetics firms to look for vegetable-based alternatives. Squalane “is desired above all other emollients,” Renninger says. “And yet its source is terrible.”

He notes that making squalane appealed to Amyris’ founders because it hearkened back to their earlier work on artemisinin, which was also originally sourced from a natural product. There is a great business case, too, Portela notes. “People have had to do away with squalane and reformulate because they couldn’t find a reliable supply,” he says.

Amyris chemists and biologists have come up with numerous other potential applications for farnesene and other yeast-derived terpenes. In a recent report, Jeffrey J. Zekauskas, a stock analyst with J.P. Morgan, wrote that such efforts are critical to Amyris’ success. “Amyris’ challenge is to find those applications with a relatively high volume and a relatively high selling price,” he wrote, advising clients that they should “await greater clarity on products made and sold before venturing into shares.”

To help get these efforts off the ground, Amyris has formed an array of commercial development agreements and joint ventures. Perhaps the most important of these is its relationship with Total. In June 2010, the French oil giant invested $133 million in Amyris in exchange for a 21.4% stake. Total is also committing $105 million in funding for a joint $180 million R&D program.

Last week, the companies deepened their relationship by agreeing to form a joint venture that will have exclusive rights to produce and market Amyris’ biobased diesel and jet fuel. It will also have nonexclusive rights to drilling fluids, solvents, polymers, and certain lubricants. 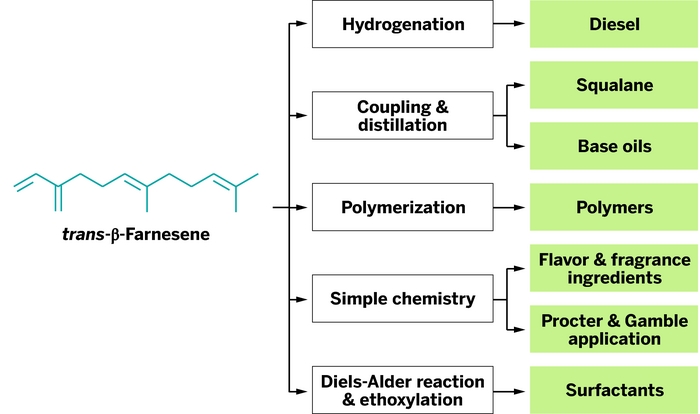 Farnesene has potential applications in fuels and chemicals.SOURCE: Amyris

Another important collaboration is with Cosan, a Brazilian sugarcane and energy conglomerate. The two companies formed a joint venture, called Novvi, to develop and produce lubricant base oils derived from farnesene.

Amyris is also forming relationships that will put farnesene and other potential molecules in more conventional chemical applications, such as polymers. In September, it signed an agreement with French tire giant Michelin to develop a fermentation route to isoprene, which Michelin would use to make a polyisoprene rubber.

Portela sees more to the collaboration than enabling environmentally friendly tires. Because more ethylene makers in North America are using ethane as a feedstock instead of naphtha, they are producing less coproduct isoprene, and tire makers are looking for alternative sources.

Similarly, Amyris is working with Japan’s Kuraray to make elastomers by copolymerizing farnesene with other monomers. It is collaborating with polyester maker Mossi & Ghisolfi to develop oxygen scavengers for plastic packaging.

Amyris recently made an acquisition that might boost its presence in the polymer field. For about $6.6 million in cash and stock, it acquired the technology of Draths, a Lansing, Mich.-based firm developing an E. coli fermentation route to muconic acid, a dicarboxylic acid that can be used as a raw material for terephthalic acid and caprolactam. Renninger wants to transition the Draths technology into yeast.

The flavors and fragrance sector, where Amyris is partnering with Givaudan and Firmenich, is another area of interest, as many of that industry’s ingredients are terpenes. Portela says Amyris could ferment ingredients that have traditionally been extracted from natural sources. “The isoprenoid pathway lends itself to these kinds of molecules,” he says.

Amyris has similar agreements in detergents and personal care chemicals. It has a contract to supply farnesene to consumer products giant Procter & Gamble. In September, Amyris announced it is working with Singapore-based palm oil processor Wilmar International to develop farnesene-based replacements for nonylphenol ethoxylate surfactants.

William Tittle, principal and director of strategy for the Americas and Asia at the consulting group Nexant, attributes the breadth and quality of Amyris’ partnerships to its experienced management. John G. Melo, the firm’s chief executive officer, previously ran BP’s U.S. fuels operations. Portela led corporate development at Lyondell Chemical. Genentech Chairman Arthur D. Levinson serves on Amyris’ board. “I see them as having a broad range of talent right across the spectrum, from technical people to commercial people,” Tittle says.

Partnerships also play a role in Amyris’ efforts to ramp up production. The company has farnesene manufacturing arrangements with Tate & Lyle in the U.S., Antibióticos in Spain, and Biomin in Brazil. The company will produce only a couple million liters of farnesene this year as it gets over start-up hiccups, but it aims to produce 40 million to 50 million L next year.

So far, Amyris is selling farnesene for $6.00 to $7.00 per L. Executives aim to reduce the price by $2.00 per L next year as they bring manufacturing costs down. In a recent conference call, Melo said Amyris’ goal is to be “cash flow positive” from operations by next year.

Amyris has plans for even more ambitious manufacturing. The company is constructing two farnesene plants in the Brazilian state of São Paulo. One, adjacent to a sugar mill operated by Paraíso Bioenergia, will have the capacity to process 1 million metric tons of sugarcane crush into about 50 million L of farnesene annually.

Another plant, a joint venture with Usina São Martinho, is slated to have twice as much capacity. Longer term, Amyris has signed an agreement with Brazil’s ETH Bioenergia to build yet another farnesene plant.

The only companies that will likely have more biobased chemical production than Amyris over the medium term are Braskem and Dow Chemical, with their planned ethanol-based polyethylene plants in Brazil. And, Portela says, Amyris will have far and away more production than any other biobased chemical start-up. “Amyris is the one that is the most advanced in terms of actually having translated synthetic biology into production and commercialization,” he says.