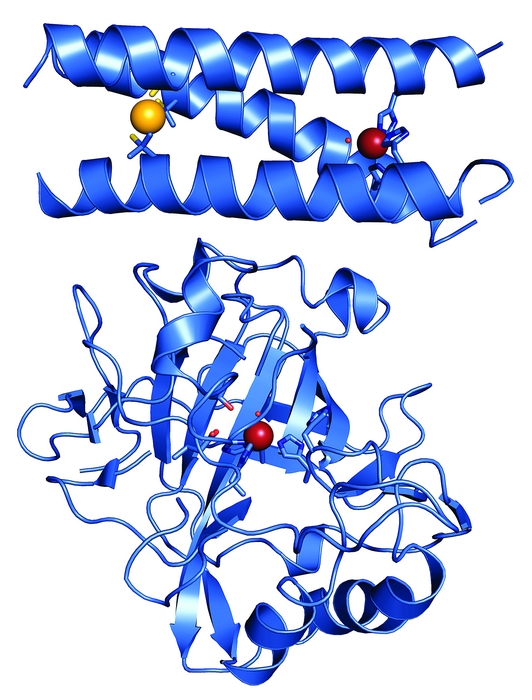 In work that could lead to a new generation of tailored protein catalysts, a research team has prepared an artificial enzyme that works uniquely well. The simple assembly, of three helices and two different metal ions, catalyzes reactions with efficiencies that approach those of the corresponding natural enzyme more closely than ever before (Nat. Chem., DOI: 10.1038/nchem.1201).

Melissa L. Zastrow, Anna F. A. Peacock, Jeanne A. Stuckey, and chemistry professor Vincent L. Pecoraro of the University of Michigan, Ann Arbor, designed, created, and tested the artificial enzyme, which acts as a hydrolase. The work could help the design of catalysts for many applications.

Structurally much simpler than natural hydrolases, the artificial enzyme includes just three linear α-helices in an arrangement called a “three-helix bundle,” a Hg(II) ion for structural stability, and an active-site Zn(II) ion. Yet its efficiency in catalyzing the hydration of CO2 is 0.2% that of human carbonic anhydrase II, one of the fastest hydrolases. And in catalyzing the hydrolysis of an acetate, its efficiency is 1% that of the natural enzyme.

Such levels of efficiency are considered stellar in the field of artificial enzyme design.

The new artificial enzyme, DeGrado says, is “a monumental piece of work.” It represents, he adds, “the culmination of a large body of data from Vince’s lab, relating to the fine interplay between protein stability, folding, and the structure of metal-binding sites” and is “the beginning of a new chapter in what should prove to be an exciting and rapidly expanding area of research.”

The artificial hydrolase is “the first really good example where both structure and reactivity have been effectively designed,” says computational protein designer Vikas Nanda of Robert Wood Johnson Medical School, in Piscataway, N.J. “There’s also a lot here for the protein design gearheads. To have two different metals and have them go to their specific sites is exciting.” The way Pecoraro and coworkers achieved this result is instructive for other researchers in the field, he says.

The work is “exciting,” says metalloprotein specialist Yi Lu of the University of Illinois, Urbana-Champaign. “Although de novo-designed α-helical bundle proteins have been reported before,” he says, “designing functional activities into them has been very challenging,” and the efficiencies of the artificial hydrolase are “quite impressive.”