SWITCH
[+]Enlarge
Credit: MACS Worldwide
Chemical makers are seeking to replace HFC-134a, a non-ozone-depleting refrigerant widely used in automobile air-conditioning, with compounds that have little or no global-warming potential.

Credit: MACS Worldwide
Chemical makers are seeking to replace HFC-134a, a non-ozone-depleting refrigerant widely used in automobile air-conditioning, with compounds that have little or no global-warming potential.

The effect of hydrofluorocarbons (HFCs) on climate change could increase significantly in a few decades unless emissions are controlled or the compounds are phased out. HFCs were broadly commercialized as refrigerants in the 1990s, and their global-warming effects were known then. But they were seen as eco-friendly because they replaced substances that deplete stratospheric ozone. Now, scientists say the globally expanding use of HFCs is a significant environmental threat. 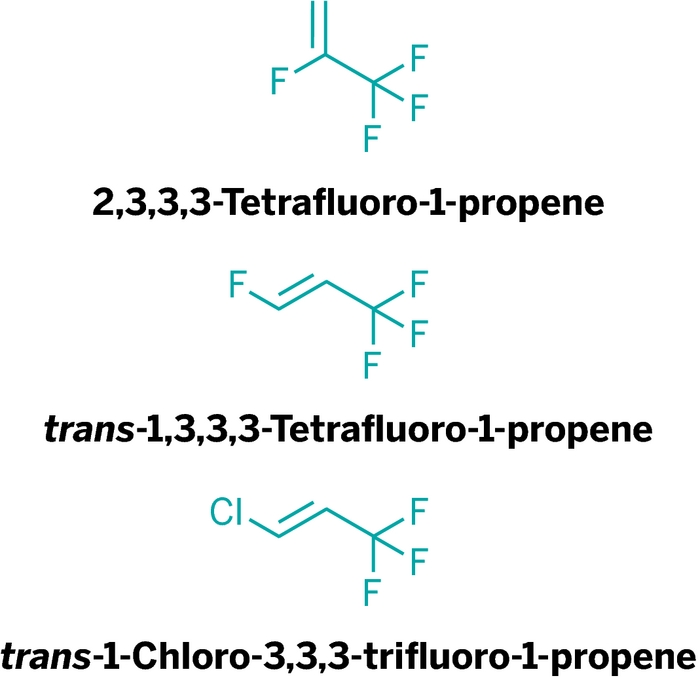 HFCs are powerful greenhouse gases, trapping heat in the atmosphere that otherwise would be lost to space. They remain in the atmosphere for times that vary from years to centuries. And they have global-warming potentials (GWPs) that, on a mass basis, are hundreds to thousands of times more powerful than that of carbon dioxide.

Participants at the 2011 International Year of Chemistry Symposium on Stratospheric Ozone & Climate Change, held last month in Washington, D.C., discussed efforts to address the global-warming effects of HFCs. On the diplomatic front, nations are seeking a way to act on HFCs despite the glacial pace of international talks on curbing greenhouse gas emissions. On the industrial front, various chemical companies have found, and continue to develop, alternatives that have refrigerant properties without ozone-depleting and global-warming consequences.

Humanity’s need for refrigeration and desire to cool indoor environments have been fraught with unintended consequences. Early air-conditioning and refrigeration systems required the use of ammonia, methyl chloride, or propane. These toxic compounds were eventually replaced by a new class of refrigerants that seemed to be comparatively benign: chlorofluorocarbons (CFCs) and their cousins hydrochlorofluorocarbons (HCFCs).

Over time, however, atmospheric chemists figured out that CFCs and HCFCs had a downside: They break down stratospheric ozone, which helps screen Earth’s surface from the sun’s ultraviolet rays. Without ozone in the stratosphere, life on Earth as we know it would not exist.

In response to the ozone-depletion crisis, governments all over the world agreed to phase out the production of the ozone-depleting substances. Chemical makers resisted this change at first, but innovation led to HFCs. Now the market for HFCs is booming globally as demand for refrigeration and automobiles with air-conditioning grows.

But if current growth in demand for HFCs continues, the non-ozone-depleting but high-GWP refrigerants could become a serious contributor to human-caused climate change by 2050, Daniel ­Reifsnyder, a U.S. government negotiator, said at the symposium.

According to the United Nations Environment Programme (UNEP), the concentration of HFCs in the atmosphere is rapidly increasing. Levels of HFC-134a, the most widely used HFC, rose about 10% per year between 2006 and 2010. And worldwide emissions of HFCs have the potential to become very large in the future and to contribute significantly to human-caused global warming, UNEP says in a report.

Curbing worldwide emissions of HFCs over the coming years can buy some time for countries to transition to low-carbon economies without causing major disruption of the climate, said Durwood Zaelke, president of the Institute for Governance & Sustainable Development. Controlling HFCs, he said at the symposium, is “the single and best opportunity the world has for getting climate relief.”

Seeking cooperative international action on HFCs, as was done for ozone-depleting refrigerants, makes sense, Reifsnyder, deputy assistant secretary for environment with the State Department, told the conference. But it is proving problematic because HFCs are listed among the greenhouse gases countries agreed to control under the Kyoto protocol, a global climate-change treaty requiring emissions cuts by industrialized nations. Negotiations under that pact are moribund, in large part because the U.S. Congress continues to reject any binding international commitments to reduce the U.S.’s greenhouse gas emissions.

The U.S., Canada, and Mexico recently proposed talks on a new international accord to cap and then reduce the production of HFCs under the Montreal Protocol on Substances That Deplete the Ozone Layer, Reifsnyder said. This environmental treaty is what led to the phasing out of ozone-depleting refrigerants. However, Reifsnyder said, some countries oppose the proposal because HFCs are specifically named in the climate-change accord.

Nonetheless, some in the chemical industry, particularly the companies that are positioning themselves to profit from a switch from HFCs, are supporting the proposal by the three North American nations.

DuPont is one. Mack McFarland, environmental fellow at DuPont, explained that the company backs the idea of controlling HFCs under the Montreal protocol because industry is familiar with what’s needed to adhere to action under that treaty. And such a move would allow companies time to make plans for the switch away from HFCs, he said.

Moving away from HFCs, however, requires finding suitable substances that have the desired properties but don’t harm ozone and have little or no potential for global warming. Chemists and companies are working on such next-generation refrigerants. Currently, several conference speakers noted, hydrofluoroolefins (HFOs) are at the top of the potential replacement list.

Another HFC replacement is 2,3,3,3-​tetra­fluoro-1-propene, commercially known as HFO-1234yf, said Mario J. Nappa, a senior research fellow at DuPont. This HFO is the leading contender as an alternative to HFC-134a in automobile air conditioners, he said. HFO-1234yf has performance characteristics similar to those of HFC-134a and could directly substitute for it, according to Nappa. Earlier this year, the Environmental Protection Agency gave its blessing to HFO-1234yf as an automobile air-conditioning refrigerant (C&EN, March 7, page 11). Last year, Honeywell and DuPont announced a manufacturing joint venture to produce HFO-1234yf.

Spatz of Honeywell noted that this new compound also has potential for use in chillers. HFO-1234yf has a 100-year GWP of 4 and has low toxicity.

Companies are also exploring trans-1-chloro-3,3,3-trifluoro-1-propene, also known as HFO-1233zd, said M.P. Sulbaek Andersen, a postdoctoral researcher at California Institute of Technology’s Jet Propulsion Laboratory. HFO-1233zd has potential use as a blowing agent for foams, replacing HFCs or CFCs that are still used in some developing countries. This compound has a 100-year GWP of 7, he said.

Although HFO-1233zd contains chlorine, an element linked to ozone depletion, the compound itself has an ozone-depletion potential of nearly zero, says David J. Williams, a senior research manager at Honeywell.

Meanwhile, the refrigerant market—once dominated by a handful of CFCs and HCFCs—is fragmenting. Customers are increasingly seeking blends or individual chemicals tailored for specific applications, said Brett L. Van Horn, global project leader for refrigerant development at Arkema, a chemical manufacturer. They are seeking balances among a number of characteristics, he said, such as performance, efficiency, safety, durability, ozone-depleting potential, and GWP, as well as physical properties such as density, conductivity, and viscosity.

Further complicating a phaseout of HFCs is the cost of the next-generation chemicals. According to DuPont’s Nappa, the new compounds are more expensive than the HFCs they are replacing.

Cost and even environmental impact may be minimized with advanced chilling engineering that uses much less refrigerant in tighter, or less leaky, systems, said Cindy Newberg, chief of EPA’s Alternatives & Emissions Reduction Branch. Such systems will lead to less loss of any refrigerant into the atmosphere, she said, and likely require fewer recharges of the chemical than current systems.