Scientists Are Doing Their Most Creative Work Later In Life

Study finds in the latter 20th century, Nobel Laureates are more likely to do their prizewinning work after age 40 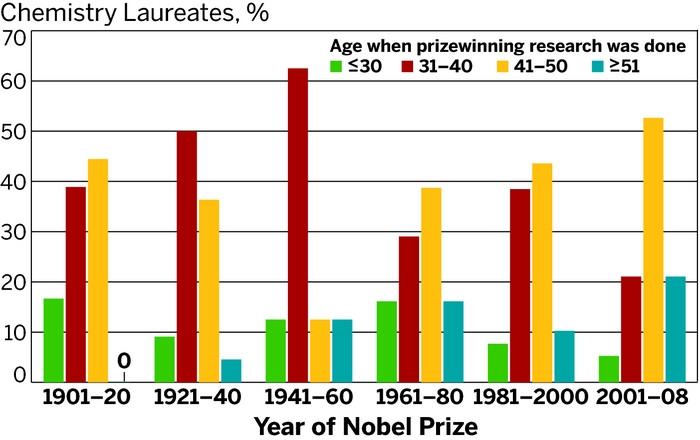 The hard work and creative thinking it takes to do research worthy of winning a Nobel Prize is certainly enough to give scientists a gray hair or two. But these days, there’s probably a simpler explanation for why these bright lights of science are sporting gray hair—they’re older.

According to a study by economists Benjamin F. Jones, of Northwestern University, and Bruce A. Weinberg, of Ohio State University, the average age at which Nobel Laureates in Physiology or Medicine, Physics, and Chemistry do their prizewinning work is on the rise (Proc. Natl. Acad. Sci. USA, DOI: 10.1073/pnas.1102895108) More than half of the Nobel Laureates in Chemistry from 1901 to 1960 did their prizewinning work by the time they were 40. Since 1961, prizewinners were more likely to have done their acclaimed work after their 40th birthday.

At first blush, Jones and Weinberg’s study may seem like good news for researchers who don’t have to think of themselves as past their prime just because they’re past their 40th birthday. But Jones tells C&EN that the implication of his finding is a bit less rosy: Scientists may be spending their most creative years being trained, as doctoral students and as postdocs, rather than doing their own innovative research.

“There’s a long-standing view that people are at their most productive as innovators early in their life cycle,” Jones says. But, he points out, if it’s true that people have to become experts before they can innovate, then scientists are spending more of their years training and less of their time innovating. Consequently, their lifetime contributions as scholars are going to be smaller. Jones estimates the decline in a given researcher’s career output is as high as 30%.

Researchers who aren’t innovating, Jones notes, aren’t contributing to technological progress. “To an economist, technological progress is important because it is the primary driver of economic prosperity, so understanding creativity—the capacity to produce new ideas—becomes essential to understand economic progress,” he explains. “Economists have noted for some time that the effort we put into R&D is increasing substantially, including the number of people who work in R&D and the number of dollars we spend on R&D. We also noticed the growth rate of the world economy has not increased. An implication is that the contribution per person of these R&D workers to overall economic progress is declining. One reason I’ve looked at this line of research is to try to understand why, as individuals, we might be becoming less productive in innovation.”

Jones and Weinberg note two correlations that may explain the trend in Nobelists’ most creative years. First, scientists are taking longer to earn their highest degree. “It does seem with the extending Ph.D. and the rise of the postdoc as an institution, that the path to becoming an independent researcher in many fields has gotten longer,” Jones says. Along these lines, Jones also acknowledges that the increasing age at which researchers secure their first major grants may be playing a role. But he sees this aging phenomenon in fields, such as mathematics, that don’t require a lot of capital expenditure. “So it’s not just about big grants,” he says.

The second correlation Jones and Weinberg noted was that there’s been a shift in what the Nobel Prizes have been awarded for. The awards have moved from theoretical work, where younger scholars may be able to think outside the field’s foundational knowledge, to experimental work, where researchers with more experience may have an edge. To illustrate this point, they found that during the revolution in quantum mechanics theory—when scientists were making breakthroughs outside of physics’s foundational knowledge—there was a sharp decline in the age at which Nobel Laureates in Physics did their prizewinning work. This shows that “the age for doing Nobel Prize-winning work is more a function of historical period than discipline because the nature of the discipline changes over time,” comments Dean Keith Simonton, a psychology professor at the University of California, Davis, who studies age and scientific creativity.

The Nobel Laureates who spoke with C&EN about Jones and Weinberg’s study didn’t find the results all that surprising. Roald Hoffmann, a Cornell University chemistry professor who shared the 1981 Nobel Prize in Chemistry for his theoretical work on the course of chemical reactions, did his prizewinning work in his twenties. But he thinks he’s still as creative now as he was then. “My memory may not be as good, but my intuition is better. I’m much better at making connections now than when I was young,” he says.

“One of the nice things about the Nobel Prize is that it’s not a lifetime achievement award,” observes Robert F. Curl Jr., a Rice University chemistry professor who shared the 1996 Nobel Prize in Chemistry for the discovery of fullerenes—work he did when he was over 50. “It’s all about discovery, and you don’t have to be a genius to stumble across something that has a major impact.” Such discoveries can come at any stage in a researcher’s life.

People
For scientists, mobility means impact
People
Where are the women?
Careers
Early career scientists don’t necessarily publish more important research
Share X
To send an e-mail to multiple recipients, separate e-mail addresses with a comma, semicolon, or both.
Title: Scientists Are Doing Their Most Creative Work Later In Life
Author: Bethany Halford
Chemical & Engineering News will not share your email address with any other person or company.