Chemical labeling and microscopy technique demonstrates its power on the spliceosome 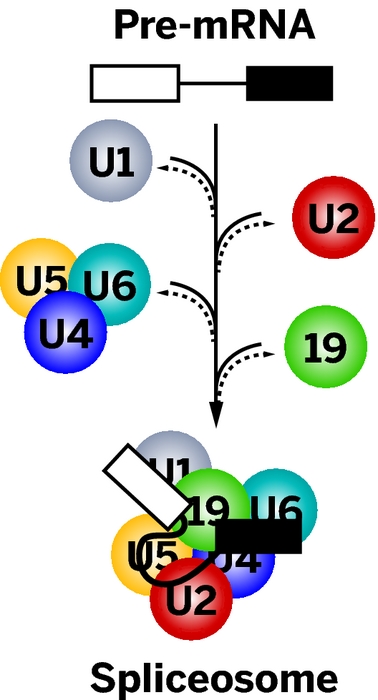 A fluorescence microscopy method that marks biomolecules with organic dyes made it possible this year to understand the workings of complex biomolecular processes at the single-molecule level. The technique was developed by Melissa J. Moore of the University of Massachusetts Medical School, Jeff Gelles of Brandeis University, Virginia W. Cornish of Columbia University, and coworkers (C&EN, March 21, page 48; Science, DOI: 10.1126/science.1198830). The research team demonstrated the approach’s capabilities by monitoring the assembly of the spliceosome, a huge protein-RNA complex that edits newly transcribed mRNA to create mature mRNA, which encodes the chemical blueprints for proteins. Postdoc Aaron A. Hoskins in Moore’s lab tagged yeast spliceosome components with organic fluorophores using a technology developed by Cornish’s group. The photon output of the different-wavelength fluorescent tags was 10 times as great as that of conventional fluorescent proteins, enabling greater sensitivity for simultaneous detection of the individual spliceosome components. Hoskins then used multilaser colocalization single-molecule spectroscopy developed by Gelles’ group to monitor the assembly of spliceosomes. As flashes of different colors of light were given off, he was able to track each component in real time as it joined the assembly. The researchers believe the method will be useful for tracking other complex bioprocesses, such as DNA replication and protein translation.