BASEBALL FAN
[+]Enlarge
Credit: Cheryl Hogue/C&EN
Anastas, who stashed a glove and ball in his EPA office, looks forward to being in New England for the Red Sox’s opening day in April. 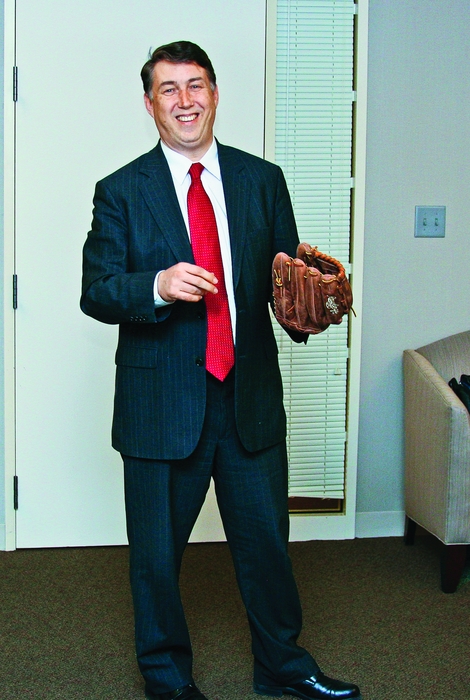 Credit: Cheryl Hogue/C&EN
Anastas, who stashed a glove and ball in his EPA office, looks forward to being in New England for the Red Sox’s opening day in April.

As a codeveloper of the principles of green chemistry, Paul T. Anastas is widely known and often admired. But he can brush all that off with an aw-shucks attitude and a big smile.

“I always say I’m a simple country chemist,” Anastas tells C&EN. “I love chemicals because I know that chemicals designed well, designed thoughtfully, have changed our life for the better and can be designed to keep on doing that in a sustainable way.”

Anastas managed to stick with that message during his recently ended two-year stint as the Environmental Protection Agency’s top scientist. During that time, he faced hostile lawmakers on Capitol Hill who impugned the scientific integrity of EPA, the tough decisions regarding use of dispersants during the Deepwater Horizon oil spill in the Gulf of Mexico, and controversy over the agency’s hazard assessments of chemicals. He sat down with C&EN days before leaving Washington to return to academic life at Yale University.

His tour of duty at EPA, which ended on Feb. 17, was his second at the agency. In 1989, with a freshly minted Ph.D., he was hired as a staff chemist in EPA’s chemical regulatory program. He spent a decade there before moving to the White House Office of Science & Technology Policy. He left that post in 2004 to become the founding director of the American Chemical Society’s Green Chemistry Institute.

The next stop for Anastas was Yale, where he directs the Center for Green Chemistry & Green Engineering. Upon winning Senate confirmation as assistant administrator for EPA’s Office of Research & Development (ORD) in December 2009, Anastas took a leave of absence from Yale. During the two years Anastas led the agency’s research program, his wife, Julie Zimmerman, a scientist in the fields of green engineering and chemistry, was acting director of the Yale center.

When Anastas came to ORD, the office was emerging from the shadow of allegations of political interference with EPA science during the Administration of President George W. Bush. “Restoring science to its rightful place” in EPA, Anastas says, is the agency’s—and not his alone—greatest accomplishment under his tenure as EPA’s chief scientist.

With that achievement, science again is the basis of all EPA decisions, Anastas explains. This is true of responses to emergencies such as the Gulf oil spill or the Fukushima nuclear disaster. It also applies to decisions that rely on extensive scientific evaluation, including what to do about endocrine disrupters or mountaintop mining, he says.

In two years as EPA’s chief scientist, Anastas came under fire at congressional hearings, most notably from Republicans in the House of Representatives who cast aspersions at the agency’s scientific efforts. Anastas is sanguine about the experience.

“The fact that science is being discussed in the Congress, and attention is being paid by Congress on scientific issues, is a good thing. It’s important that the Congress ask these questions,” he says.

“What I think is absolutely essential is that science cannot, must not, and should never be used as another political position,” he continues. “While it’s understandable that there are going to be different perspectives on the outcome of scientific assessments, what always needs to be preserved—and what everyone at EPA and the Office of Research & Development seeks to preserve—is that scientific integrity in all that we do.”

This conviction guided Anastas when he oversaw the development of EPA’s scientific integrity policy, points out Francesca Grifo, director of the Scientific Integrity Program at the Union of Concerned Scientists, an advocacy group.

Another “great achievement,” Anastas says, is the agency’s move to integrate the concept of sustainability into its work. He describes the effort as “understanding how we can achieve environmental and economic goals simultaneously for societal benefit.” He oversaw the reorganization of EPA’s research around the concept of sustainability (Environ. Sci. Technol., DOI: 10.1021/es203881e).

During Anastas’ tenure at ORD, the agency finalized several scientific assessments of chemicals, points out Jennifer Sass, a senior scientist at the Natural Resources Defense Council, an environmental group. They included high-profile, and sometimes controversial, hazard assessments that had been in the works for years in the cases of trichloroethylene and perchloroethylene and for more than two decades in the case of the most toxic form of dioxin.

“He deserves to be proud of those important accomplishments,” Sass tells C&EN. “Anyone who was able to free” the long-delayed dioxin assessment “from the bureaucracy deserves a medal,” Grifo says (C&EN, Feb. 27, page 5).

The American Chemistry Council, an industry association, said it was “encouraged” by Anastas’ effort to improve the agency’s chemical hazard assessments. ACC, long a critic of the program, says in a statement, “We look forward to working with his successor to make further improvements that will deliver more efficient, accurate, and credible assessments.”

“We need to complement our strategies for understanding existing problems with creating an innovation race to the top for the next generation of materials, chemical products, and processes so we won’t be causing these problems in the first place,” Anastas continues. An example of innovation, he says, is EPA’s Computational Toxicology Research Program, which is expected to assess almost 10,000 chemicals this year. The results of these tests will help pinpoint both which chemicals are toxic and why. And just as important, he adds, “we’ll use that information to design the next generation of chemicals so that they’re not toxic.”

As he settles back in at Yale, Anastas says he’ll miss the “dedication, the energy, the relentlessness, and the creativity of the people of EPA.” But he’s ready to return to academic life.

And Anastas, a consummate Boston Red Sox fan, is delighted to return to his team’s territory.

But, he says, “I’m looking forward to nothing more than spending time with my wife and two little girls,” who are ages one and four. His family stayed in Connecticut while he worked at EPA in Washington, D.C. “It’ll be so wonderful being back with them.”

The Obama Administration hasn’t announced a nominee to replace Anastas. To whomever that person is, Anastas offers this advice: “Tell the story of EPA as a science agency as loudly and as often as you possibly can. The work of EPA research is compelling, and the American people will be proud when they learn of it.” EPA not only improves the quality and length of their lives, he says, but also helps create jobs through new technologies and innovation.

Anastas also has a message for chemists, notably ACS members: “Recognize the fundamental power of chemistry to design tomorrow to be better than it is today.” He urges chemists to “build that idea into their daily work, share it with their colleagues, teach it to their students, and shout it from the rooftops.”

Policy
Scandal-plagued U.S. EPA chief Scott Pruitt resigns
People
Anastas Steps Down At EPA
Policy
Credibility On The Line
Share X
To send an e-mail to multiple recipients, separate e-mail addresses with a comma, semicolon, or both.
Title: Transitioning
Author: Cheryl Hogue
Chemical & Engineering News will not share your email address with any other person or company.