DOWNSLIDE
[+]Enlarge
Spain’s R&D budget has dropped significantly over the past three years. NOTE: Data for 2012 are estimates. Monetary figures were calculated at the March 14 exchange rate of $1.00 U.S. = €0.7645. SOURCE: Confederation of Spanish Scientific Societies 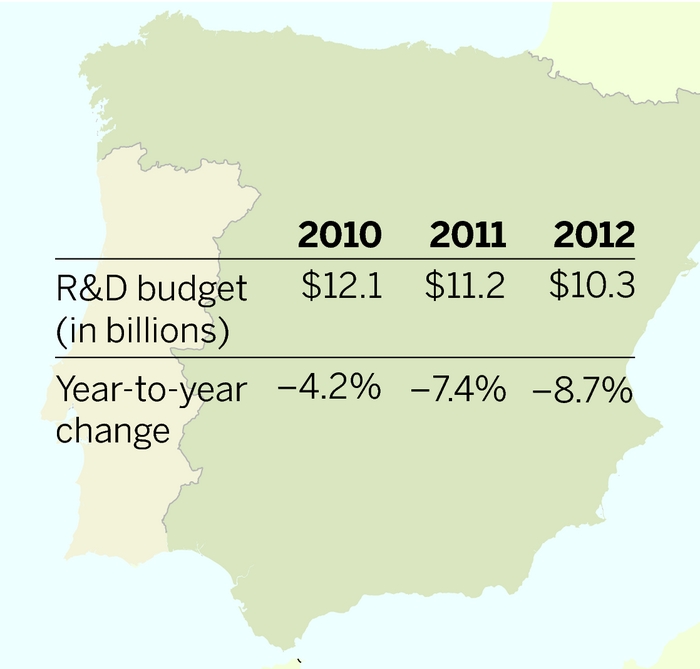 Spain’s R&D budget has dropped significantly over the past three years. NOTE: Data for 2012 are estimates. Monetary figures were calculated at the March 14 exchange rate of $1.00 U.S. = €0.7645. SOURCE: Confederation of Spanish Scientific Societies

More Than 40,000 researchers and members of the general public have signed an online petition that takes issue with the Spanish government’s plan to cut funding to science grants and to freeze the hiring of scientists in the country. 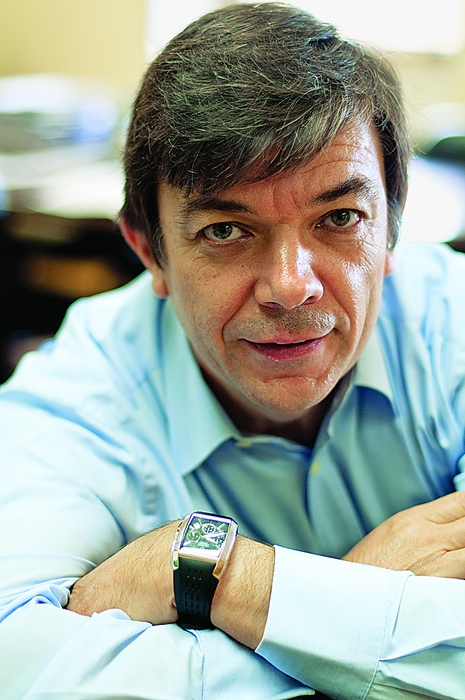 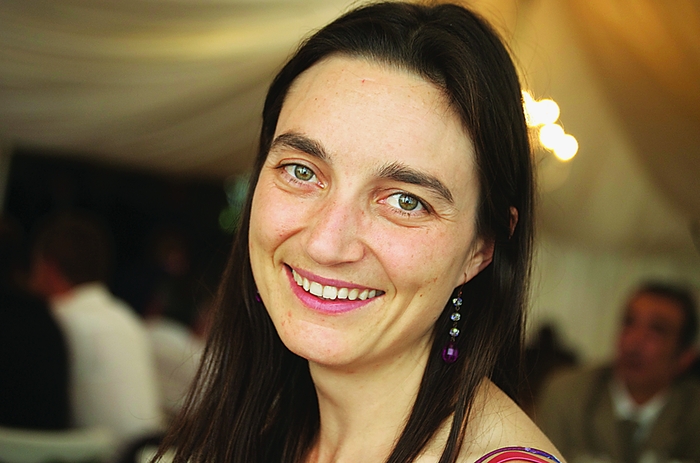 At the end of March, three months into the fiscal year, the Spanish government will vote on its 2012 budget, which includes sweeping cuts to reduce the national deficit. On the chopping block is the country’s R&D budget, which faces its third straight year of cuts.

In January, the government announced that the 2012 R&D budget would be 7.0%, or $784 million, less than the $11.2 billion (€8.6 billion) 2011 budget, but there were rumors that the cuts could be even more severe. Then earlier this month,Carmen Vela Olmo, the Spanish secretary for science, told the newspaper El País that the cuts to R&D were likely going to be 8.7%, or $973 million.

“The budget cuts currently being considered for R&D and innovation would cause grave long-term damage to the already weakened Spanish research system,” states the petition, which was written collaboratively by several groups, including the Confederation of Spanish Scientific Societies (COSCE), which represents some 70 societies, and the country’s Federation of Young Researchers.

“We needed to do something before the budget is approved,” says Carlos Andradas, COSCE president. “The main goal of the petition is to make a lot of noise in order to call attention to the critical situation. We need to let the government know that this is really important, and we want to show the consensus among the many communities of researchers” in Spain.

About 40% of Spain’s R&D budget forms the pool of money used for science grants, salaries and operating budgets at national research laboratories, and the fees to participate in international projects such as the European Organization for Nuclear Research (CERN) and the European Space Agency, Andradas says. The remainder of the R&D budget is for loans to science-based industry; this funding is not accessible to public institutions, he adds.

Spain is currently under pressure from eurozone finance ministers to adopt deeper cuts than the ones already proposed in the country’s initial budget. “We can all agree that the deficit should be under control,” Andradas says. But he counsels that any further budgetary cuts, including to R&D, should be made only after careful consideration.

Furthermore, the Spanish government is giving scientists a mixed message, says Amaya Moro-Martín, a cosmologist at the Spanish National Research Council, in Madrid, who helped write the petition.

She points out that Spain agreed to a March 2 European Council memorandum declaring that Europe’s response to its current economic challenges “requires the boost of innovation, research, and development,” which are “drivers of growth and jobs.”

This declaration is inconsistent with the current plans to cut science funding in Spain, Moro-Martín says. The cuts further reduce the country’s science and technology investment, which currently sits at 1.4% of gross domestic product. In comparison, the European average investment is 2.0% and the European Council’s goal is 3.0%.

The petitioning scientists are also concerned about a hiring freeze planned across the civil service. In Spain, both national laboratory scientists and university professors are considered civil servants, and thus the freeze means no scientists can be hired on a permanent basis at these institutions in the country.

The exasperation voiced in the scientists’ petition about the way the country funds and manages science research has been brewing for some time.

Last November, the country voted in a new government. In December, the new government dissolved the country’s Ministry of Science & Innovation and put the portfolio for R&D into the Ministry of Economy & Competitiveness. “The official line is clear: Science is not a priority in Spain,” Moro-Martín notes in a recent opinion article published in Nature (DOI: 10.1038/482277a).

Spain does not currently have a separate agency, such as the U.S. National Science Foundation or the U.K. Engineering & Physical Sciences Research Council, to manage and distribute R&D funding. Instead the country’s science budget is divvied up by a government ministry, which is now the Ministry of Economy & Competitiveness.

The previous government passed a law that set the stage for a national agency, which would be separate from the government, to coordinate science in the country. Vela Olmo, as the secretary for science, is responsible for establishing that agency this year.

“I’m optimistic about the establishment of the new agency, but I am a bit afraid of how it will look,” given the current funding cuts, Andradas says. “Will it be controlled by the state or by a scientific board? It needs to be independent from the government. It needs to support research and development, not based on political values, but on scientific values.”

C&EN’s calls and e-mails to Vela Olmo about the funding cuts, new national agency, and the relocation of the science portfolio were not returned by deadline. But Vela Olmo recently told El País that the science budget being located in the Ministry of Economy & Competitiveness should not be interpreted as science being sidelined or undervalued. She also said that her office was going to maintain excellent science and researchers in the system, despite the budget cuts.

In addition to concerns about how the federal government is managing its science priorities, researchers are upset about how state-level governments are handling their research budgets. For example, in 2005, the government of Valencia opened the Prince Felipe Research Centre, a flagship center for regenerative medicine research with a staff of 260 people. In 2011, however, the Valencia state health ministry announced a 35.0% cut in funding to the center; as a result, 100 people or more will lose their jobs and the remaining staff will have their salaries cut.

“If we don’t keep investing in science Spain is condemned to be an underachiever,” says Emilio M. Pérez Álvarez, an organic chemist at the Madrid Institute for Advanced Studies, who signed the online petition. “The question now is: ‘Do we want to be a holiday destination for the next 50 years, or do we want to catch up with other developed countries in Europe?’ ”

People
Majority of government scientists in Canada still feel unable to speak freely to media
Policy
Committed to science
Policy
Too much spin
Share X
To send an e-mail to multiple recipients, separate e-mail addresses with a comma, semicolon, or both.
Title: Spanish Researchers Fight Funding Cuts
Author: Sarah Everts
Chemical & Engineering News will not share your email address with any other person or company.