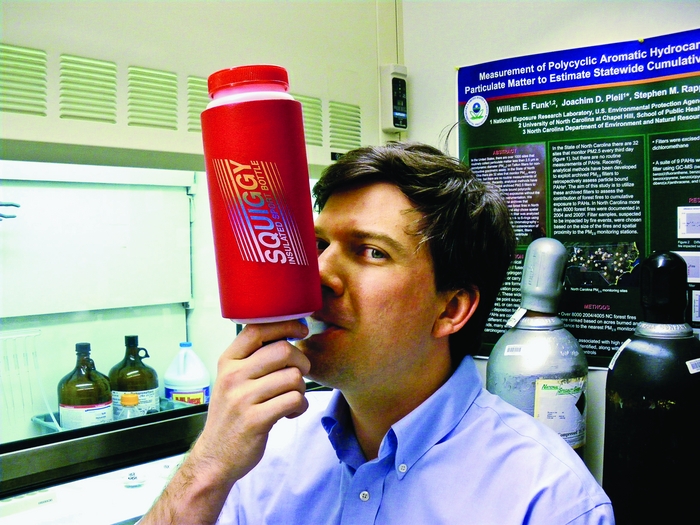 Police officers who pull over an erratic driver know well the benefits of breath analysis: They can quickly and noninvasively analyze a suspect’s breath to find out whether the driver has been drinking.

Doctors have long wanted to take advantage of the same benefits of breath analysis. They recognize breath’s many advantages over blood or urine as a clinical sample. Doctors can collect practically unlimited amounts of exhaled breath, do not have to wait for the supply to replenish before collecting another sample, and can collect breath from anyone—young or old, healthy or sick.

Doctors and researchers hope that breath analysis will reflect everything that happens in the body, because blood from all areas of the body travels through the lungs to exchange gases, which people then exhale.

In a symposium at Pittcon, researchers described advances in breath analysis and challenges that remain before it will become more widespread in doctors’ offices. The goal of such analysis is to identify and measure metabolites that can serve as biomarkers of health or disease.

“Breath analysis is as old as medicine itself,” said Raed A. Dweik, director of the pulmonary vascular program at Cleveland Clinic. In ancient Greece, physicians noted a connection between breath aroma and disease.

Despite its long history and many perceived benefits, breath analysis finds use in only a few diagnostic tests.

One of those tests uses nitric oxide as a biomarker to diagnose asthma. All people exhale NO from the lining of their breathing tubes, but levels are particularly high in asthma patients’ inflamed and swollen breathing tubes.

Scientists discovered the connection between NO and asthma in the early 1990s, and the Food & Drug Administration approved the first device for measuring exhaled NO in 2003. But use of the test is still not particularly widespread, Dweik said, because doctors have disagreed about how to use measurements of exhaled NO to guide treatment. Clinical practice guidelines were finally approved by the American Thoracic Society in 2011, Dweik said, to provide advice for such use.

Breath can also reveal far more than lung health. Breath’s components emerge from various sources inside and outside the body, according to Terence H. Risby, an emeritus professor of environmental health science at Johns Hopkins University’s Bloomberg School of Public Health. Exhaled breath contains molecules that a person breathed in, absorbed through the skin, ingested in food and beverages, or produced endogenously. It can even reflect events, such as surgery, that happened months earlier. Everything that happens in the body should show up in the breath, some things immediately, others belatedly.

Every endogenous chemical in breath originates from a biochemical pathway, Risby said. Disease can only stimulate or modulate existing pathways, he noted, not create entirely new biochemistry. Rather than producing unique components, diseases are likely to alter the ratios or levels of compounds in the breath.

To monitor disease using breath, researchers first need to know what healthy breath looks like and how it might vary among individuals.

One complication is that the composition of breath changes as a person exhales: The onset and end of an exhaled breath may contain different compounds. It can also change with the mechanics of breathing. For example, a hyperventilated breath differs from a normal breath, Risby said.

To make data from individuals meaningful, Risby and others said, standard methods are necessary. Researchers need to measure the volume and frequency of each breath. They need to monitor carbon dioxide concentration, mouth pressure, heart rate, and oxygen saturation. By paying careful attention to these parameters, researchers can collect breath samples that vary in volume by less than 5%, Risby said. Once researchers normalize data to the CO2 concentration, they can compare the information with that from other individuals.

At Pittcon, Joachim D. Pleil, a researcher at the Environmental Protection Agency’s National Exposure Research Laboratory in Research Triangle Park, N.C., described one way to get consistent sample volumes. He asks people to breathe into a chilled sampling device for 10 minutes to collect exhaled breath condensate. Originally, Pleil just asked subjects to breathe naturally; that worked reasonably well, but he thought he could improve the process. Now, audio cues guide subjects’ breathing as they watch a monitor that shows them their breath volume, flow, and CO2 levels in real time. The new process has improved sampling consistency by a factor of 10, Pleil said.

No matter how consistent the samples are, they would be worthless without a way to analyze them. Analysis requires both an analytical device and the means to transfer the samples to it.

Heather L. Lord, a research associate at the University of Waterloo, in Ontario, described a variety of microsampling devices that can prepare breath samples for analysis. She wants to develop technologies that combine sampling and extraction to make bedside measurements possible.

The method researchers use most widely is conventional fiber-based solid-phase microextraction, Lord said, but other methods are gaining traction. 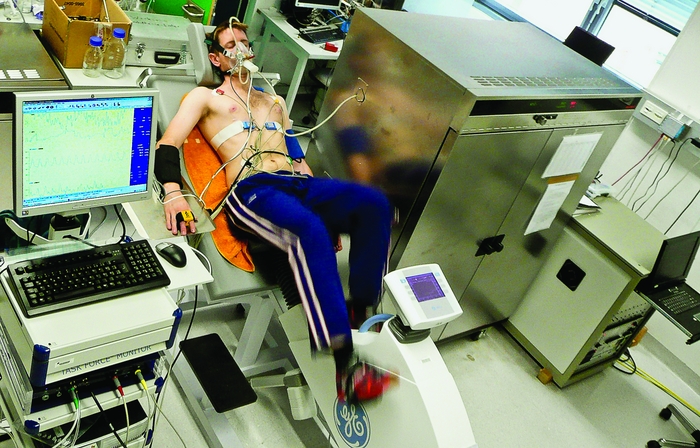 Credit: Courtesy of Anton Amann
Breath samples are taken while a man pedals a stationary bike that imposes defined workloads.

One of these devices is the sorbent-packed needle trap, she said. In it, a needle is packed with up to three sorbents, arranged from the weakest to the strongest. The weaker sorbents first pick up easy-to-extract components, leaving hard-to-trap components for the strongest sorbent. The needle trap can snag all the organic components in the sample, regardless of which fraction they’re in—gas, liquid, or aerosol. The trap picks up water, which researchers are not interested in measuring but which helps desorb the organic compounds they do want to measure. Heating the sample desorbs compounds from the sorbent and moves them into a gas chromatograph.

The newest sampling approach that Lord described uses a thin polymer film to trap breath samples. Because the film’s surface-to-volume ratio is higher than that of other devices, it allows a higher sampling rate and better sensitivity. Unlike the needle trap, the thin film extracts only volatile compounds from the breath. The membrane also excludes water. To collect samples, subjects simply breathe directly onto the film. In a proof-of-concept experiment, Lord and her coworkers demonstrated that their system could detect garlic breath by sampling its volatile components.

Once breath samples are collected, a range of methods can analyze them. Anton Amann, director of the Breath Research Institute at the Austrian Academy of Sciences, and his coworkers use proton-transfer reaction time-of-flight mass spectrometry (PTR-TOF-MS) among other methods. In such direct mass spectrometric methods, he said, subjects can breathe directly into the instrument. Another attractive method is ion mobility spectrometry, Amann said, because it is sensitive and portable.

Amann and others are testing their methods with human volunteers, both healthy and ill. Amann described real-time exploratory measurements of biomarkers such as exhaled isoprene and acetone. Both may indicate serious disease: Isoprene is a by-product of cholesterol synthesis, and high acetone levels are an indication of untreated diabetes.

He and his colleagues monitored healthy volunteers’ breath using gas chromatography/mass spectrometry or PTR-TOF-MS while the volunteers pedaled a stationary bicycle that imposed predetermined workloads. The researchers observed isoprene levels moving in tandem with leg contractions associated with pedaling. Amann does not yet know the significance of these findings.

The researchers also wondered how the biomarkers in people’s breath would change during extended observation. To find out, they monitored volunteers’ breath while they slept. Overnight, acetone levels increased. The isoprene levels also increased but not in a smooth pattern. Amann attributed spikes in isoprene to movement or to changes in sleep state. Isoprene levels decreased during the REM (rapid eye movement) sleep stage, which paralyzes muscles, Amann said.

Amann also sees the intuitive fit of breath analysis for early diagnosis and monitoring of a disease such as lung cancer. He reported measurements of volatile compounds from smokers, former smokers, and nonsmokers—with or without lung cancer. He found some compounds in all samples, whereas other compounds appeared only in the breath of certain types of people.

Such comparisons of healthy individuals and those with full-fledged lung cancer are a critical step in developing a working diagnostic. But researchers still need to include other lung diseases in the comparison, Amann said.

Diagnosing renal and liver disease may work with breath analysis, Risby reported, using sensor-based measurements of ammonia. Ammonia in breath can come from two sources: mouth bacteria and blood in the deep lung. Oral rinsing before breath sampling gets rid of the mouth ammonia and ensures that the sample reflects only the concentration in blood.

Instead of studying chronic disease, Pleil uses breath analysis to figure out the health effects of environmental exposures. Using standard filters, he captures particulates in breath that he then cultures to identify bacteria that individuals have been exposed to.

He started out looking for opportunistic bacteria that infect the lungs of cystic fibrosis patients, such as Pseudomonas aeruginosa,Streptococcus milleri, and Prevotella melaninogenica. Then he analyzed the gas above the culture medium by gas chromatography/mass spectrometry to see what volatile compounds the bacteria produced and to identify their signature in breath.

The information can help researchers figure out which components in a breath sample were produced by bacteria and which by the subject. He hopes eventually to skip the culture step and just look at volatile compounds in breath as indicators of bacterial disease.

But the researchers acknowledge that the methods they described at Pittcon have a long way to go before they make it to the clinic.

Part of the problem is that doctors want simple tests that pair a single biomarker with a disease and give definitive yes-no answers, Dweik said. But for most diseases, a panel of biomarkers will probably be necessary.

Devices to diagnose disease will inevitably be more complex than a breathalyzer test for blood alcohol. Doctors have waited a long time for the tests, but they will have to stay patient until scientists determine the best ways to measure markers—and learn what those markers tell them about disease and health.