[+]Enlarge
Credit: Allie Knight
Look Up: Byrum points out that the elements are everywhere. 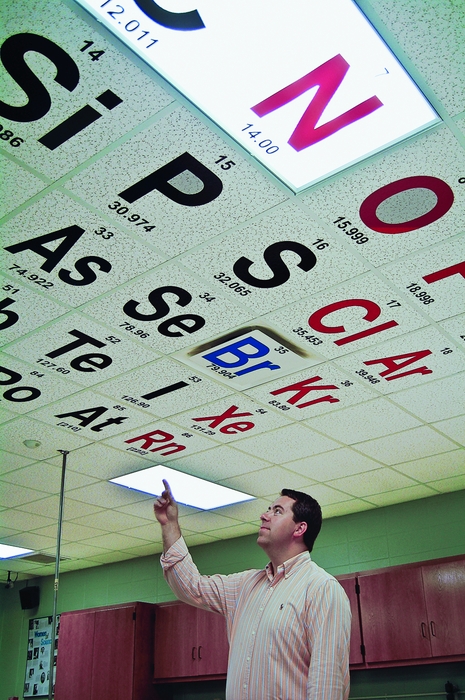 Credit: Allie Knight
Look Up: Byrum points out that the elements are everywhere.

When students in Scott Byrum’s high school chemistry class at North Sand Mountain School, in Higdon, Ala., need some inspiration, all they have to do is look up. Byrum has installed a massive periodic table of the elements on the ceiling of his classroom, which doubles as a lab.

“I’m having to compete with all the Xboxes and the Nintendos, so I have to keep my sword sharp,” Byrum says. “Unless I can keep my classroom hopping and keep it exciting, I will lose the students in a matter of moments. This periodic table on the ceiling almost engages their minds visually like a game.”

Byrum began assembling his giant periodic table last year while his classroom was being renovated. “The ceiling tiles are squares, which is the perfect geometry for the way the periodic table is lined up,” he says. Byrum got a local company to create the vinyl lettering for the tiles, and he and his students affixed the letters to them.

Solid elements are in black lettering, liquids are in blue, and gases are in red. The table is extremely accurate, except for one small deviation, Byrum says. “I had to move one element over because of where the architects had installed a smoke detector,” he admits. If a new element is discovered, all he needs to do is annotate a new ceiling tile.

“My students love it,” Byrum says of his new ceiling. “It makes them feel more connected to my instruction.” The artwork is also an instant conversation starter. “Even faculty members, when they walk in and see it,” want to talk about it, he says.

Byrum no longer worries about his students daydreaming in class. When their minds start to wander, and they look up at the ceiling, well, there’s the periodic table. “Even though they may be daydreaming, they’re daydreaming science,” he says.

Elsewhere in the country, the periodic table has inspired Brent Sass, owner of Wild & Free Mushing, in Fairbanks, to name his Alaskan husky pups after the elements. Sass trains dogs for mushing, or the sport of dogsledding. 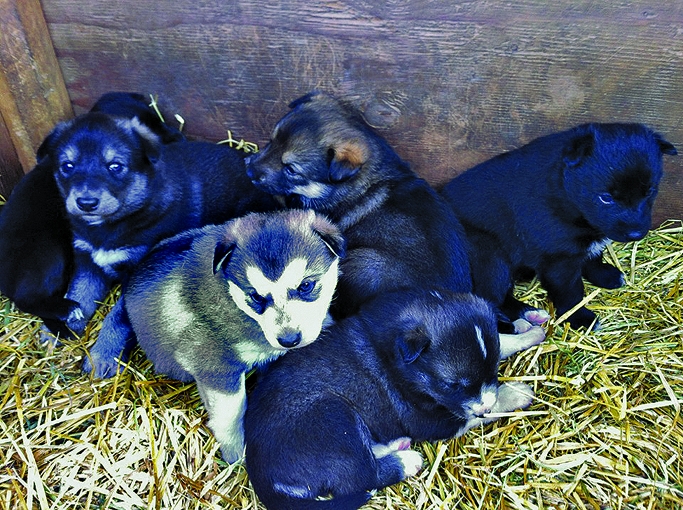 Over the past three years, Sass has bred three litters of element-named pups. There’s Carbon, Cobalt, Copper, Merc (mercury), and Nickel, which are three years old. Then there’s Argon, Krypton, Neon, Radon, and Xenon, which are nine months old. The most recent additions are Beryl (beryllium), Bo (boron), Flo (fluorine), Iron, Ox (oxygen), and Tin, which were born a month ago. All the pups are offspring of a husky named Silver and his mate, Chicken.

The idea to name the dogs after elements came to Sass as he was searching for a theme for his pups. Since silver is the name of an element, Sass decided to continue with the elements.

He admits that his naming system is pretty random. “I wait until they’re at least a couple weeks old and then sit down with the periodic table and match each dog up with a name,” he says. “There’s really no pattern. Don’t ask me how it works, but by the end the names are a good fit for the dog.”

Only Silver’s pups carry the elemental monikers, but Sass’s other dogs have eclectic names. There’s Corvette, Guillermo, Jwow, and Squid, just to name a few. Sass doesn’t expect to run out of element names for Silver’s pups anytime soon, though: “I’ll have way too many dogs if that happens!”

Science Communication
Book covers and Disney characters—there’s a periodic table for everything
Periodic Table
Element collecting: A niche hobby that connects people to chemistry
Periodic Table
Meet the 'I Spy a Periodic Table' Readers’ Choice winner
Share X
To send an e-mail to multiple recipients, separate e-mail addresses with a comma, semicolon, or both.
Title: Periodic Table Ceiling, Elemental Pups
Author: Linda Wang
Chemical & Engineering News will not share your email address with any other person or company.

Comments
kathy buckner (May 11, 2012 4:28 PM)
Hey Scott is my newhew and he's always been a lover of science. I applaud him for his unique way of helping kids learn about the periodic tables. Keep up the good work. Aunt Kathy
Reply »

This is wonderful and very creative. What a way to tell ALL the foundation foxes if want to be here you got to love the chemistry. How can you help me replicate this incredibly innovative idea in one of our lecture hall, especially that for the first year lecture, here at the Tshwane University of Technology (TUT), Pretoria, South Africa. My name is Peter (chemistry lecturer)and my email address is: ndibewup@tut.ac.za. Thank you in advance for your reply to my comments
Reply »

Codie Banczak (August 2, 2014 1:19 PM)
Peter,
"Byrum got a local company to create the vinyl lettering for the tiles, and he and his students affixed the letters to them." It sounds like he had each element with atomic number and mass printed on a sheet of vinyl the same size as the ceiling tile. Then you would just have to glue each element to the correct ceiling tile. That's what I got from this, can someone piggy back or offer constructive criticism to this idea?
Reply »

Larry Snyder (June 14, 2012 9:37 PM)
I have done this with my ceiling except the students take home the tiles. Then they do each element and I reinstall them. But my question is this: How are you getting the tiles to light up? From the picture, it looks like Carbon and Nitrogen are lighed.

Michelle Kelley (May 31, 2013 12:41 PM)
This is a creative idea but due to fire codes a lot of teachers will not be able to use the vast amount of space right above their heads.
Reply »