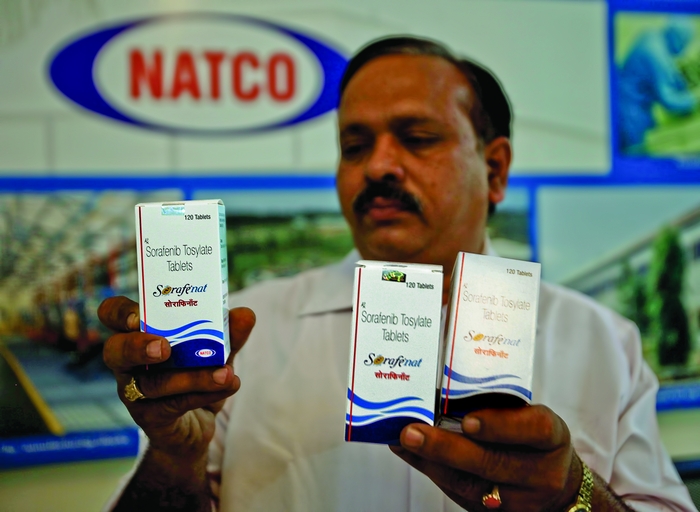 In a case that pitted Bayer against the Indian drug producer Natco Pharma, India’s controller of patents attempted to balance the interests of cancer patients with the need to fairly compensate inventors of life-saving drugs. The resulting ruling, made earlier this spring, allows Natco to sell a copy of the patented Bayer drug Nexavar for just 3% of the original price (C&EN, March 19, page 10).

The ruling serves as warning that drug companies may lose patent protection if they do not make the utmost effort to improve the affordability of their drugs.

The case also highlights the tumultuousness of India’s pharmaceutical market: As soon as Natco won the case it found itself embroiled in a price war with Cipla, an Indian drug company that is also making a copy of Nexavar, known generically as sorafenib, while disputing the validity of Bayer’s patent on the drug.

Compulsory, or forced, licensing is a cumbersome and rarely used legal process that is permitted by the World Trade Organization’s Agreement on Trade-Related Aspects of Intellectual Property Rights, known as TRIPS.

In explaining his ruling in favor of Natco, P. H. Kurian, India’s controller of patents, started by noting that a patent is a privilege accompanied by an obligation to let the public share in the benefits of a discovery. The controller then explained that Bayer had not made convincing efforts to let Indian patients benefit from Nexavar, which treats kidney and liver cancers.

Kurian noted that Bayer did not introduce Nexavar in India until 2008, despite launching it in other countries in 2006 and obtaining the permits to do likewise in India in August 2007. What was worse, the controller said, Bayer priced its drug at $5,300 for a month’s worth of treatment, well beyond the means of most Indians. He further noted that Bayer sold only enough Nexavar in India last year to treat 200 patients, whereas more than 8,900 people could benefit annually from the drug.

The ruling allows Natco to sell sorafenib for less than $170 per month and pay Bayer a royalty of 6% of gross sales. In deciding the royalty percentage, Kurian used a guideline from the United Nations Development Programme that the amount in such cases should be set at 2 to 6% of sales. The controller chose the highest figure in acknowledgment of the considerable R&D expenses Bayer incurred.

But even at the high end of the UN guideline, the royalties Bayer will earn are tiny. Earlier this year, Hyderabad-based Natco projected that it will sell $1.1 million worth of generic Nexavar in India in 2013, according to Madineedi Adinarayana, general manager of legal and corporate affairs. If those sales projections pan out, Bayer will earn a mere $65,000 from Natco.

But Natco’s market projections are likely too optimistic. Since 2010, Mumbai-based Cipla had been selling its generic Nexavar for $570 per month of treatment. But after the ruling in favor of Natco, Cipla decided to initiate what is effectively a price war by cutting its price to $143.

One of India’s leading generic drug producers, Cipla is the largest Indian supplier of sorafenib. “The ruling has made low prices more acceptable,” Yusuf K. Hamied, Cipla’s chairman and managing director, tells C&EN. Prior to the patent controller’s judgment, he explains, Indian doctors would not have believed that an inexpensive generic of Nexavar could be as effective as the original.

Natco is deciding how to counter Cipla’s move, but it may respond with a strategy to “attack the competition,” Adinarayana says. “We’re still going ahead. The controller authorized us to price at no more than $170, but we can charge less.” Still, Cipla’s aggressive pricing makes him question whether going through the compulsory licensing process was worth the effort, he says.

Bayer declined C&EN’s request to explain how it plans to respond to the ruling.

Yet it’s possible that international drug companies bruised by India’s system of pharmaceutical patent protection—Roche, Novartis, Tibotec, and Gilead Sciences among them—may get some relief soon.

According to many reports, India and the European Union are quietly negotiating a free-trade agreement that would strengthen pharmaceutical patent protection in India. Activists fear that any deal will stem the availability of low-cost drugs from India; big drugmakers are likely rooting for it.