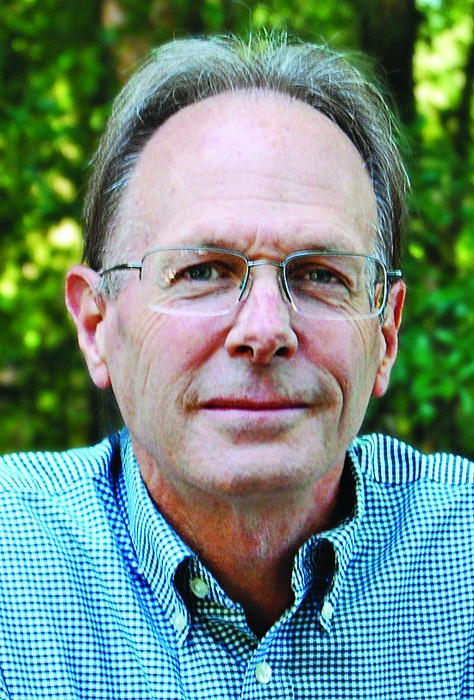 Thanks to color-changing compounds, auto-tinting rearview mirrors darken to protect drivers’ eyes from the glare of tailgating cars’ high-beam lights. John R. Reynolds, a professor of chemistry at the University of Florida, has spent 20 years developing similar materials, known as electrochromic polymers. When oxidized or reduced by an electrical current, these materials quickly convert between a vibrantly colored opaque form and a form that can transmit light easily. His work has led to a palette of π-conjugated polymers for a wide range of applications, such as light-filtering building windows, color-switching electronic signs, and electronic readers.

Tobin J. Marks of Northwestern University calls Reynolds the “world leader” in electrochromic polymers. This year’s ACS Award in Applied Polymer Science recognizes Reynolds for his pioneering and influential work on the synthesis, characterization, and utilization of these materials.

On the way to filling the polymer palette, the Reynolds group has synthesized a series of polymers based on electron-rich heterocyclic monomers. The two main polymer types have been based on 3,4-alkylenedioxythiophene (XDOT) and 3,4-alkylenedioxypyrrole (XDOP) monomers. By adding electron-poor heterocycles into the polymer backbone, Reynolds and his colleagues have extended the range of possible colors through so-called donor-acceptor polymers. To produce polymers that are easy to process into flexible films for devices, they’ve tweaked polymer side-chain chemistry to produce soluble materials, making them compatible with methods like ink-jet printing, roll-to-roll coating, and spray coating.

Reynolds’ lab has established new methods to characterize electrochromic materials. Unlike the detectors in a chemistry lab spectrophotometer, which respond equally to all wavelengths of light, the photoreceptors in our eyes are more sensitive to some wavelengths than they are to others. So Reynolds and his colleagues developed colorimetric methods to analyze a polymer’s properties based on how the human eye works.

As part of the characterization process, Reynolds’ lab also builds electrochromic devices to test how the polymers behave in real-world applications. Marks says they’ve pioneered new designs for window-type devices, which are analogous to auto-tinting car windows, and display-type devices, which use incident light to produce colored surfaces.

Work on electrochromic materials isn’t the only aspect of his career that Reynolds takes pride in. “What I’m really interested in is the development of graduate students and postdocs and their careers,” he says. “I’d put it over developing electrochromic polymers.”

Over his career, Reynolds has published some 250 journal articles, produced almost 35 patents, and mentored more than 50 graduate students.

Reynolds will present the award address before the ACS Division of Polymeric Materials: Science & Engineering.

Electronic Materials
Chemistry in Pictures: Blooming brilliant
Materials
Fluorescent materials are the brightest ever made
Biomaterials
Fruit’s metallic blue caused by lipid nanostructures
Share X
To send an e-mail to multiple recipients, separate e-mail addresses with a comma, semicolon, or both.
Title: ACS Award in Applied Polymer Science
Author: Michael Torrice
Chemical & Engineering News will not share your email address with any other person or company.