FIRE AWAY
[+]Enlarge
Credit: Shutterstock
Raman spectroscopy can do more than simply prove a shot was fired. 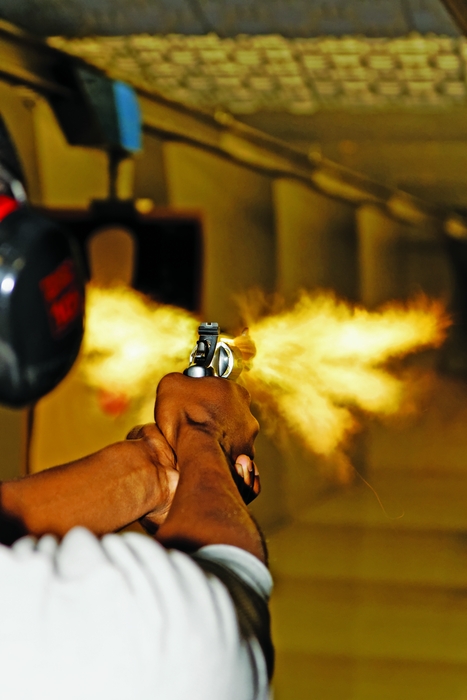 Credit: Shutterstock
Raman spectroscopy can do more than simply prove a shot was fired.

Viewers of police procedural television shows are probably familiar with the idea of using gunshot residue to help identify suspects and solve crimes. In real life, however, forensic investigators currently use gunshot residue merely to establish that a gun has been fired. But new work with Raman spectroscopy suggests those residues might contain far more information than police currently analyze.

When a gun is fired, components of the ammunition vaporize and form particles that can settle on the shooter, the target, or nearby surfaces. These particles contain organic and inorganic components from the primer, the bullet, and the gunpowder (the propellant). Most crimes involve short-range shots, in which most of the gunshot residue comes from the gunpowder, López-López says. To unambiguously identify the material found at a crime scene as gunshot residue, forensic scientists use bulk methods such as atomic spectroscopy or single-particle methods such as scanning electron microscopy to measure three characteristic metals—lead, barium, and antimony.

The development of green ammunition, which means it’s lead-free, makes it tough for investigators to rely on metals analysis alone. “The conventional method to detect gunshot residue becomes much weaker,” Lednev says, “because now you have only two markers.” López-López notes that “other samples could have these two metals.”

In developing their Raman alternative, López-López and García-Ruiz focused on three common gunpowder components: propellants such as nitrocellulose and nitroglycerin, stabilizers such as diphenyl­amine, and compounds that lessen the visible flash of light from the muzzle such as 2,4-dinitrotoluene. Using six types of ammunition, they compared a representative Raman signature acquired from five to 10 residue particles for each discharge with the spectrum of unfired ammunition.

“We could distinguish between ammunition with diphenylamine and ammunition with ethyl centralite,” López-López says about the stabilizers. She would like to build a library of Raman signatures from different types of ammunition that forensic scientists could use to determine what type of ammunition produced gunshot residue found at a crime scene.

Lednev also wants to do more than just identify gunshot residue. He wants to use Raman to figure out what combination of gun and ammunition left that residue—a piece of information he believes he can pull from the Raman spectrum. 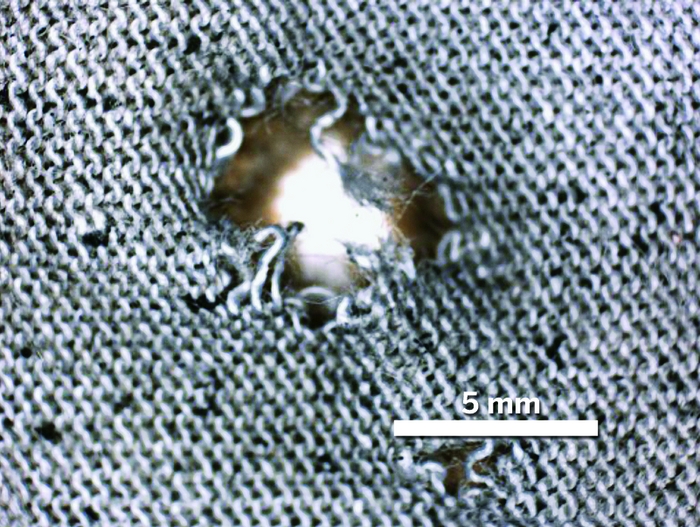 So far, Lednev has been able to distinguish between two combinations of ammunition and firearm. Eventually, he plans to tease out how each aspect—propellant, caliber, and firearm—affects the final composition of the residue.

To distinguish between the combinations, he statistically analyzes many spectra of the same residue. “Gunshot residue is very heterogeneous,” he says. “If you pick up several particles from the same discharge, you can find different particles with different compositions.” Even a single particle can produce different spectra from different spots.

To deal with this heterogeneity, Lednev uses Raman microscopy to generate a multi­dimensional Raman signature that incorporates the location and intensity of spectral peaks. “We take as many spectra as we can from different particles and different spots on the same particle,” he says. They repeat the process for each combination of ammunition and firearm. The resulting signatures don’t overlap. “We conclude that even if we have one gunshot residue particle and measure one Raman spectrum, we can differentiate between the two firearms,” Lednev says.

At this point, Lednev sees the method as a way to rule out suspects rather than positively identify them. “Let’s say you have gunshot residue from a crime scene and you have a suspect with a certain firearm and ammunition,” he says. “Since I can discharge this firearm and collect gunshot residue under laboratory conditions, we can create a data set to characterize this particular firearm-ammunition combination. Then we can measure a Raman spectrum from a single gunshot residue particle and tell whether it belongs to this set. If it doesn’t belong, we can exclude this firearm with very high certainty.”

Next up for Lednev is determining whether the method can also positively identify weapons. He has submitted a proposal to the Department of Justice to study the differentiation power of a library of Raman spectra for each type of ammunition and firearm.

It is unlikely, however, that Raman could distinguish between two guns of the same model, Lednev says. “In principle, if the guns are identical and the ammunition is the same, then both the reagents and the conditions for the combustion reaction would be expected to be the same,” he explains. “This is something we need to investigate because there might be small differences. It’s hard to say what those differences might be.”

A long-term goal is to develop instruments that could be taken to crime scenes. Although commercial portable Raman instruments are available, most of them don’t have the microscope optics that Lednev considers essential for collecting spectra from different spots on the same particle.

“Raman is gaining some use in the crime laboratory for drug analysis and other trace analysis,” says Thomas A. Brettell, former director of the New Jersey State Police Office of Forensic Sciences, now a professor of forensic sciences at Cedar Crest College, in Allentown, Pa. He predicts that for gunshot residues, Raman microscopy in particular “is going to be powerful.”

Over the past 15 to 20 years, Brettell says, DNA analysis has stolen the forensic limelight with its ability to identify a specific person. “But in the shadow of DNA analysis, this marriage of microscopy and [Raman] spectroscopy has gone on,” he says. “It’s a powerful marriage of two analytical techniques that have made trace evidence examination much more powerful in the crime lab. A lot of times you need some kind of link between the evidence and the suspect to get a warrant to get a DNA sample. This is the kind of technique that will help you find that evidence.”

Brettell suggests that combining Raman with polarized light microscopy could make it easier to pick out gunshot residue from other types of particles that might be found at crime scenes. “When you’re dealing with this kind of evidence, you have dried blood, you have ink, you have dyes on clothing, all kinds of things that are interfering. A polarized light microscope combined with Raman could help locate the particles and make the morphology you’d be looking at a lot easier.”

“Any analytical technique that can provide additional information has to be seen as a step forward,” says Jason W. Birkett, a senior lecturer in analytical forensic chemistry at Liverpool John Moores University, in England. But, he cautions, “the work is still in its preliminary stages. It looks exciting, but there’s more work necessary before this type of evidence from this technique can be accepted in a court of law.”