[+]Enlarge
Credit: Label It Yourself 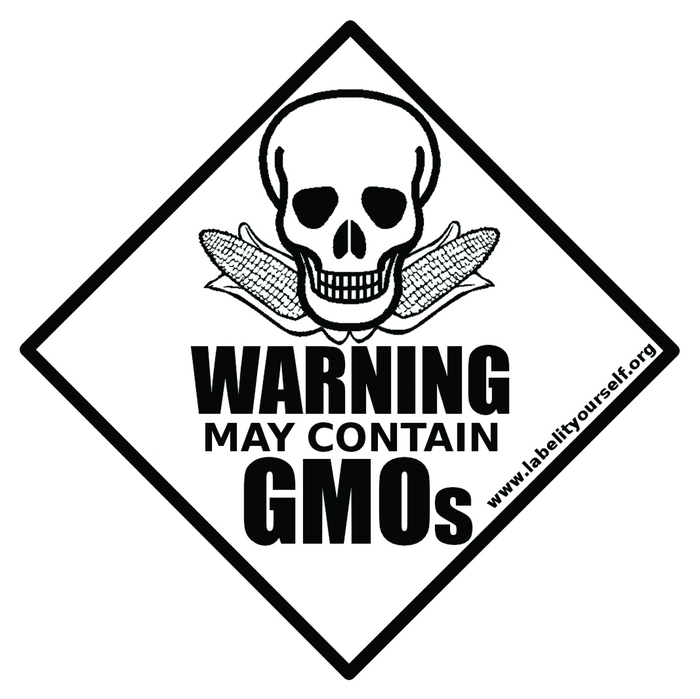 Credit: Label It Yourself

“GREAT BARRINGTON, Mass.—On a recent sunny morning at the Big Y grocery here, Cynthia LaPier parked her cart in the cereal aisle. With a glance over her shoulder and a quick check of the ingredients, she plastered several boxes with hand-designed stickers from a roll in her purse. ‘Warning,’ they read. ‘May Contain GMO’s (Genetically Modified Organisms).’ ”

The story was accompanied by a tight shot of LaPier’s homemade sticker—black type on a bright yellow circle—on the front page and a large photo of LaPier in action on page 18. The Times’s website has a video of LaPier explaining why she’s resorted to this activity and footage of her labeling cereal boxes.

The story appeared in the Friday, May 25, issue of the Times, and I read it at home that evening. I clipped the story and brought it to work on Tuesday. I spent much of that morning wandering around the Internet tracking down sources identified in the original article and following the inevitable links to one source after another. One article on genetically modified food leads to a remarkable number of threads on how various actors work to shape public opinion on complex scientific and technological topics and how those topics and efforts are reported on in the media.

The Times story is a well-reported, well-written article on an important and complex topic. I’m ambivalent on whether genetically modified foods should be labeled as such. I think salmon genetically engineered to grow twice as fast as normal salmon are creepy and I’d just as soon not eat them, although I can’t summon a rational argument to support my reservations. I know enough about molecular biology and the human digestive system to be completely comfortable eating corn carrying the Bt gene or products made from soybeans from glyphosate-resistant plants. And the idea that beef fed genetically modified corn could somehow be a threat to human health or that animals eating genetically engineered alfalfa should not be considered “organic” is just silly.

Still, the notion that people have a right to know what’s in their food so they can make informed choices is attractive. If only that were the motivation behind the nascent label-it-yourself movement the Times seems to celebrate in its approving coverage of LaPier. (The story does note, very late, that LaPier’s actions could be illegal.)

The choice of LaPier to highlight is interesting, though. Her little yellow sticker is not confrontational. Not so the sticker associated with the Label It Yourself campaign. At their website you can download a sheet with 24 copies of the symbol reproduced on this page that you can print on “1.5- × 1.5-inch print-to-the-edge square label sheets” and take to your local supermarket to “LABEL THEM YOURSELF.” I think we can all agree that a skull and cross-corncobs goes somewhat beyond neutral consumer information and crosses the border into advocacy. And the Times reporters knew about Label It Yourself, pointing to the organization’s Facebook page in their story. I find it curious that they chose to focus on a sticker that is neutral and nonconfrontational and ignore a sticker that obviously carries an agenda.

In fact, the labeling debate is largely about efforts by activists to undermine the use of genetic engineering in agriculture in the U.S., much the way it has been blocked in Europe. The Times story duly notes this point of view but focuses primarily on consumers and organic farming interests.

As I pointed out in last week’s issue, communicating science to the public is difficult.

Periodic Table
The periodic table’s big year
Environment
Re: GMO labeling
Environment
Genetically Modified Organisms: Debate over labeling of food heated up
Share X
To send an e-mail to multiple recipients, separate e-mail addresses with a comma, semicolon, or both.
Title: Labeling GMO Food
Author: Rudy M. Baum
Chemical & Engineering News will not share your email address with any other person or company.

Comments
post-graduate (June 5, 2012 7:19 AM)
Interesting comments on the GMO discussion. I just cannot resist adding that the main reasoning behind the resistance towards GM food may not be that they would be hazardous to the consumers. Just as the GM food items follow the same rules in the digestive tract as the normal food items, they also follow the same rules as other plant and animal species in the field, before ending up on our plates. Use of herbicides and insecticides always leads to the emergence of more resistant strains of those organisms and so on. To have sustainable food production, we should maybe focus on a closer relationship with the natural ecological processes, rather than away from them.
Reply »

Teddy Bear Films (June 13, 2012 1:55 PM)
The GM food issue is more complex than simply avoiding / choosing GM foods for health reasons. As our documentary explores, GM foods have an effect on the people who grow them. For example, in India a farmer kills himself every 30 minutes largely because of the financial pressures GM foods place on the farmers.

Our website is here: http://www.teddybearfilms.com if you'd like to learn more about the crisis in India.
Reply »

Dr.Ashok K Kaushal (July 13, 2012 11:20 PM)
GMOs is too advanced a concept for a common person to comprehend it.Tell them that the GM foods have GMOs which can impact their children in a variety of ways, they will try to understand it before they offer it to their children.Consuming it themselves may not attract their attention.GM Foods pressure in India does not kill the farmers,it is the governance on them which does not help them due to correct practices by correct people,by whom the system is way laid for ulterior motives.There is need to educate them on their financial facilities provided by the government.Impact of GMOs on human health and the diseases new to human being can only be a guess and need extensive research.There is an equal need to understand the need to have GMOs with that urgency.Will there be a shortage of food if there is no GM Foods except for research purposes and to that end.Are there governments which can govern sincerely on the mandate given to them by innocent citizens.
Reply »