What are deodorants and antiperspirants, and how do they fight sweat?

Controlling stink and soggy armpits for more than a century 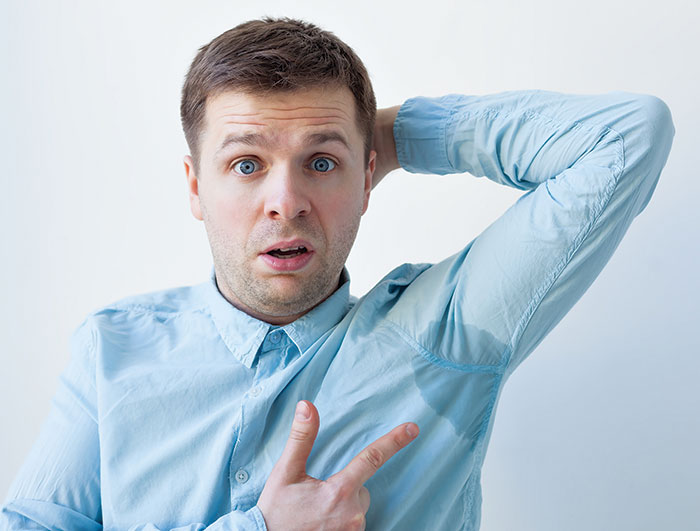 For most of human history, people did very little to rein in their body’s ripe aroma. If anything, they washed periodically or tried to hide their odor by masking it with strong fragrances.

Deodorants typically include antiseptic ingredients that kill or disable bacteria living in the armpit. That region’s warm and moist environment is an optimal habitat for corynebacteria and other sweat-eating microorganisms. These tiny life-forms feast on perspiration produced by armpit sweat glands, generating stinky waste by-products such as trans-3-methyl-2-hexenoic acid. This compound is responsible for the characteristic odor of human sweat, says George Preti, a chemist at Monell Chemical Senses Center who specializes in perspiration research.

Whereas deodorants try to kill the odor-producing culprits, antiperspirants block sweat pores, thereby preventing the flow of nutrients to armpit microorganisms. Both products typically include a bit of perfume as backup.

The first patents for deodorants were filed in the 1860s, when antiseptic entrepreneurs looked for new surfaces to clean with newly discovered sanitizing agents such as ammonium chloride, sodium bicarbonate, and even formaldehyde, which is now known to be a carcinogen.

The huge array of active ingredients in deodorant contrasts starkly with those found in antiperspirants. From the get-go, antiperspirants have relied on aluminum salts to stop the flow of sweat. Patent applications for antiperspirants also first appeared in the late 1800s, with the first trademarked antiperspirant, called Ever­dry, arriving in the U.S. in 1903, according to Laden.

Everdry’s active ingredient was aluminum chloride, a salt that forms aggregates in sweat pores and blocks them. In the subsequent century, antiperspirant makers have used aluminum formate, aluminum chloro­hydroxide, and aluminium zirconium tetrachlorohydrate. Antiperspirants also typically include some ingredients to counter bacteria and are thus often an anti­perspirant-deodorant hybrid.

Aside from active ingredients, the way that deodorants and antiperspirants are applied to the armpit has evolved dramatically since their inception. The same holds true for the solvents in which the active ingredients are dissolved or suspended.

Early antiperspirants suspended their active ingredient in alcohol or, more often, acids, and they had to be swabbed with cotton balls on the armpit. These formulations were slow to dry and prone to irritating skin and ruining clothing. Likewise, early deodorants were often sold as creams, which were rubbed by hand on the armpit, often leaving these zones—and any clothing—unappealingly greasy.

Inspired by the ballpoint pen, roll-on deodorants were invented in the 1940s. Sticks, gels, and aerosols emerged in the decades thereafter. Although these new deodorant and antiperspirant products improved the aesthetics and ease of application, the biggest nonactive ingredient innovation came in the 1970s, when quick-dry cyclomethicones, also known as methyl­siloxanes, hit the market, Laden notes.

Cyclomethicone solvents are now widespread in many antisweat products because they don’t irritate skin and they evaporate quickly, leaving behind the deodorant or antiperspirant’s active ingredient but no greasiness or stickiness. Cyclomethicones are, however, under regulatory scrutiny in Europe because of concerns that the molecules—which are also widely used in hand creams, hair conditioners, makeup, and other personal care products—may bioaccumulate in the environment.

In recent decades, makers of deodorants and antiperspirants have begun encapsulating active ingredients in time-release polymer enclosures so the the products last longer. Many deodorant and antiperspirant companies have also been developing additives that specifically block the action of bacterial enzymes responsible for turning odorless sweat into an unpleasant stench, Laden notes.

Preti and his colleagues have helped create additional ingredients that distract the nose of nearby people from stinky sweat smells. They’ve found a collection of pleasingly fragrant molecules that are similar in shape to some of the unpleasant odors in human sweat. These mimics physically occupy the receptors in the nose that are normally devoted to detecting the offensive odor molecules. In human tests, men’s noses were easier to trick than women’s.

Sweating may be an inescapable part of being human, but the past 100 years have shown that people who want to restrain their armpit aroma have abundant options for doing so.

UPDATE: This article was modified on August 9, 2017 to refresh its information and data.

Consumer Products
Symrise, ChemCom join for odor neutralization
Environment
Sweet Smell Of Repellent
Biological Chemistry
Chemical Invisibility Cloaks Thwart Pesky Mosquitoes
Share X
To send an e-mail to multiple recipients, separate e-mail addresses with a comma, semicolon, or both.
Title: What are deodorants and antiperspirants, and how do they fight sweat?
Author: Sarah Everts
Chemical & Engineering News will not share your email address with any other person or company.

Comments
Taryn (May 9, 2013 12:43 AM)
For everyone there looking for a natural deodorant that contains NO aluminum, try Lavilin!! I started using it years ago, and have been a satisfied customer ever since. Aluminum has been found to cause damage to the brain and kidneys, and aluminum is one of the key ingredients in anti-perspirants. Ever since learning about this, I made the switch to Lavilin and could not feel better about it! I've made my kids and my husband switch over as well, and they are all thrilled with the results - Just apply once a week and you're set! Find it here: http://www.amazon.com/Foods-LAVILIN-UNDERARM-DEODORANT-CREAM/dp/B000MGOZ8A
Reply »

stefanie (June 23, 2013 10:07 PM)
I am very interested in finding out what ingredient or ingredients in deodorant gives it its consistency, stops it from melting, preserves it and acts as the carrier for the active ingredients.
Reply »

Solid sticks are well-established delivery forms for topically applied drugs and cosmetics, being particularly useful for lipsticks, deodorants, and antiperspirants. In general, a solid stick consists of an essentially solid matrix that serves as the base for some active ingredient or cosmetic substance. Typical deodorant sticks, which contain ingredients to mask odors or eliminate their cause but which do not contain an antiperspirant agent, are in effect ethanol gelled With sodium stearate. Since antiperspirant sticks incorporate an astringent, generally aluminum chlorohydrate, that tends to be inactivated under alkaline conditions, the ethanol-stearate formulations used in deodorant sticks are generally unsatisfactory for antiperspirant sticks. Using other lower alcohols or other metal stearate salts will not significantly reduce the problem. Modern antiperspirant stick formulations avoid the alkalinity that inactivates the astringent by employing a hydrophobic waxy matrix. To improve sensory perception and facilitate smooth application, various additives, particularly volatile silicones such as cyclomethicone (silicone VS-7158), are also included in the formulations. See (1) H. E. Jass, "The History of Antiperspirant Product Development," Cosmetics and Toiletries, 95, 25-31 (1980); and (2) G. S. Kass, "Deodorant and Antiperspirant Formulary," Cosmetics and Toiletries, 95, 57-72 (1980). See also U.S. Pat. Nos. 4,425,328, 4,280,994, and 4,229,432 for examples of antiperspirant stick compositions.

Although this patent is not recent and is in any case directed to a topical analgesic formulation, the background discussion summarizes some basic differences between deodorant sticks and antiperspirant sticks.
Reply »

Naeema (February 23, 2015 3:56 AM)
Hi
Can you please tell me what the ingredients are in Mum cream deodorant as it's not stated on the tin.

Thanks and regards
Naeema
Reply »