Pharmaceuticals: Planned closure is the latest big pharma retrenchment from the state

In a move that will reverberate through New Jersey’s “pharmaceutical alley”—the state’s hefty collection of big pharma labs—Roche says it will close operations in Nutley, N.J. The decision to shutter what for decades has served as the Swiss drug company’s U.S. headquarters is expected to cost 1,000 people their jobs.

The Nutley site conducts research on oncology, virology, and inflammation. Oncology and virology activities will be transferred to facilities in Switzerland and Germany, where about 80 positions will be added. Inflammation research will be discontinued, although a few projects could be shifted to labs in Europe, a Roche spokeswoman says.

The Swiss drug giant claims that the cuts will enable it to keep R&D spending flat despite a steady rise in the number of projects in clinical studies. CEO Severin Schwan notes that over the past 18 months, Roche has seen promising results in 24 of 28 late-stage trials. Jean-Jacques Garaud, head of pharma research and early development, will leave the company at the end of the month, and Mike Burgess, head of oncology and large-molecule research, will take over Garaud’s duties on an interim basis.

When the Nutley site closes, Roche will no longer have laboratories on the East Coast. The company will instead create the Pharmaceuticals Translational Clinical Research Center to support its interactions with regulatory authorities and academic and biotech partners. Roche expects to transfer roughly 240 jobs from Nutley to the center, which it hopes to open in 2013 at a yet-to-be-determined site.

Drugs such as Valium and other benzodiazepines were invented in Nutley, which has been the centerpiece of Roche’s U.S. operations for 80 years. The firm’s top management was based there during World War II. But the site’s role shifted after the company’s 2009 acquisition of the biotech firm Genentech. Roche transferred commercial operations to Genentech’s South San Francisco site that year and ended some research activities—notably in RNAi—at Nutley in 2010.

“Nutley’s legacy and footprint as a much larger former regional headquarters and a manufacturing site left us with an expensive and oversized infrastructure,” says Thomas G. Lyon, the Nutley site’s head. “While we have made notable progress to cut costs by more than 50% in the past two-and-a-half years, it was not enough.”

The shuttering of the Nutley operations is part of a troubling trend for the life sciences in New Jersey. From 2007 to 2010, the number of drug industry jobs in the state fell by 22.4% to 32,794, according to a report released last month by the nonprofit Battelle and the Biotechnology Industry Organization.

Pharma’s retrenchment from New Jersey is a symptom of the industry’s changing approach to research, says Richard M. Gordon, a drug industry analyst at the University of Michigan’s Stephen M. Ross School of Business. Although the state is steeped in traditional drug discovery expertise, companies are now investing more heavily in large molecules and “information-driven discovery,” Gordon says.

“New Jersey’s competitive advantage was one of the previous generation, but it offers nothing in terms of the new generation,” he says. When considering where to put new labs, pharmaceutical companies are increasingly looking at San Francisco and the Boston area, which offer proximity to biotech firms and academic research centers.

Merck & Co. and Pfizer both shed jobs in the state after their 2009 acquisitions of Schering-Plough and Wyeth, respectively. Among the more recent setbacks for New Jersey, Sanofi is set to close its Bridgewater facility by the end of the year. Research activities will be moved to a new site in Boston. 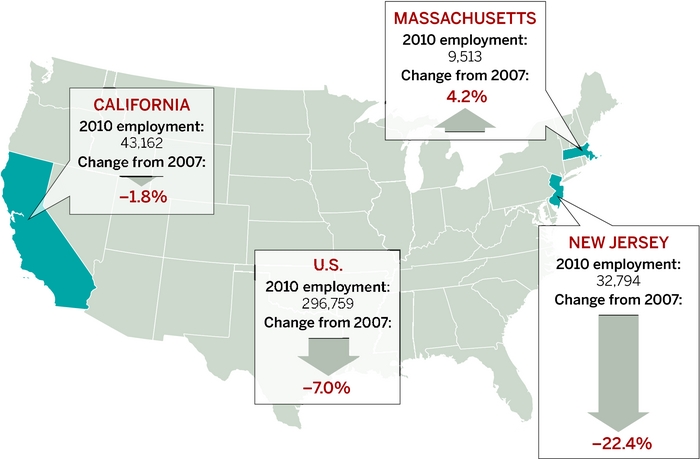