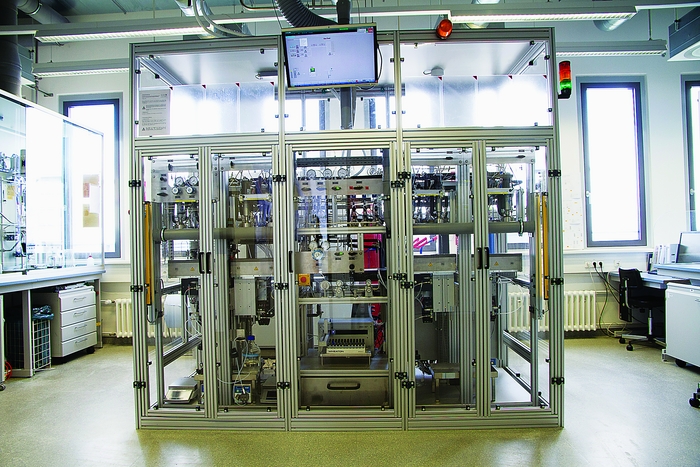 Clariant, a Swiss specialty chemical company with heritage dating to the 19th century, has failed to keep pace with industry leaders when it comes to the manufacture of chemicals from renewable raw materials. That is about to change, Hariolf Kottmann, the firm’s chief executive officer, told journalists recently at a briefing in Germany. Clariant is poised to apply biotech expertise gained via its April 2011 acquisition of Süd-Chemie across the whole company. Biotechnology “is a core future business,” Kottmann said.

A modest-looking building on Staffelsee­strasse, a quiet street in Munich, houses a series of laboratories that are the key to Clariant’s biotech future. Set up by Süd-Chemie six years ago, the center houses 67 staffers, 55 of whom are scientists, who have been focused on developing a process to generate ethanol from nonfood biomass.

The center has 3,300 m2 of lab space and features a lab-scale cellulosic ethanol facility. Staffed by scientists who tend to wear T-shirts and jeans under their white lab coats, the center feels more like a biotech start-up than the R&D unit of a major chemical company. Kottmann believes they have the expertise to develop enzymes and microorganisms that convert biomaterials into useful chemicals beyond ethanol.

The lab was an offshoot of Süd-Chemie’s main businesses in chemical catalysts and adsorbents. “Süd-Chemie acquired and built up this business to offset the possible substitution of heterogeneous catalysis by biocatalysis. For Clariant, it has a much broader importance,” Kottmann said after a tour of the building. “This biotech center gives us immediate access to the technology we require.”

Kottmann declined to provide a specific profit forecast for the bioproducts the company plans to make, but he acknowledged that “in the next five years, about 30% of our products have to be based on renewables.” Other leading chemical companies already are using biomaterials in a wide range of specialty chemicals. BASF, for example, says more than 3% of all its feedstocks are renewable raw materials.

Clariant’s driver for developing bioprocesses is customer demand, particularly in the personal care field. Some of the company’s major customers, including Henkel, Procter & Gamble, and Unilever, are asking to see a higher percentage of renewable raw materials in Clariant’s products within the next few years, Kottmann said. For example, P&G has a long-term goal of using 100% renewable or recycled materials for all of its products and packaging.

The opportunity is significant. Consulting firm McKinsey & Co. forecasts that the global market for biobased chemicals and pharmaceuticals will be worth between $220 billion and $430 billion by 2020, up from $100 billion in 2008. Some analysts forecast that about 16% of all chemicals will be derived from renewable raw materials by 2020, twice the current level.

“Processes based on the use of biocatalysts also have the potential to cut manufacturing costs by eliminating processing steps when compared with typical synthetic organic chemical processes. This could prove to be a significant benefit for Clariant as the company applies biotechnology across its product lines,” said Kalib Kersh, lead analyst with the biobased materials and chemicals practice at Lux Research, a U.S.-based market research group.

Clariant has identified 55 potential projects where Süd-Chemie’s biotechnology skills could be applied to existing products or the development of new ones, said Andre Koltermann, head of the biotech research center and the man who will oversee the broader application of biotechnology at Clariant. A biochemist by training, Kolter­mann brings with him academic experience from leading a research group at Max Planck Institute for Biophysical Chemistry, in Göttingen, Germany. He later founded Direvo, a German biotech firm that develops technologies to convert biomass into industrial products.

In the next six months, Clariant plans to assess the feasibility of the 55 projects and then prioritize their development according to market and technology potential. Of them, 15 are in the field of industrial and consumer chemicals, 10 are in oil and mining products, and seven are in textiles. Others are in emulsions, detergents, leather chemicals, and additives.

Michael Grosskopf, head of Clariant’s additives business, is keen to apply biotechnology to create a new range of biobased products within his unit, which includes additives for coatings and plastics. “We plan to develop a lot of products with the biotech center,” Grosskopf said.

Luckily for Clariant, the Munich center has room for expansion. Staffers at the Staffelseestrasse site tell C&EN they are hopeful that additional scientists will be brought in soon to assist with what is likely to be a larger workload.

Süd-Chemie’s Sunliquid biomass-to-ethanol process starts with the pretreatment of straw or other lignocellulosic feedstock with steam. This is followed by treatment with enzymes and then fermentation using an undisclosed microorganism. The process generates 1 metric ton of ethanol from 4 to 5 metric tons of straw.

The company plans to start up a demonstration plant this month with an ethanol capacity of 1,000 metric tons per year in Straubing, a town less than two hours’ drive from Munich. Subject to the process’s successful pilot testing, Clariant will look for a partner to invest $250 million to $300 million to build a larger industrial-scale facility to prove the commercial viability of the technology, Kottmann said.

When Clariant acquired Süd-Chemie, the German firm’s strong culture of innovation was as important as its biotech expertise and high-growth catalysts and adsorbents businesses, Kottmann said. In 2010, its last full year before being acquired, Süd-Chemie spent about $86 million on R&D, or 5.3% of its sales. In contrast, Clariant spent about $144 million on R&D that year, just 1.9% of its sales. R&D and innovation are as important in specialty chemicals as they are in pharmaceuticals, Kottmann said. “We have to catch up with peers in our group.”

Beyond the 55 potential biotech projects, Clariant has another 40 to 50 leading projects in its R&D pipeline at various stages of maturity. The company intends to generate additional sales of $350 million to $700 million from new products it introduces up to 2015.

Recent introductions for the company include its Exolit brand of nonhalogenated flame retardants, “which could become a blockbuster product for us in the next five to six years,” Kottmann predicted.

Kottmann said he plans to combine the innovative culture created at Süd-Chemie with Clariant’s financial discipline. “Süd-Chemie was a family-owned and innovation-driven company. Our colleagues there were not asked on a quarterly basis, ‘What is your cash flow and your earnings?’ They had a different kind of philosophy managing the business,” he said. “This is an attitude and behavior that is interesting for us to try to apply when it comes to innovation within Clariant. At the same time, we have a different philosophy when it comes to key performance indicators.”

Süd-Chemie’s catalysts and adsorbents businesses are already contributing to Clariant’s bottom line. Nevertheless, if everything at Staffelseestrasse goes according to plan, biotech expertise could prove to be the most important contribution of Süd-Chemie when it comes to Clariant’s future success.