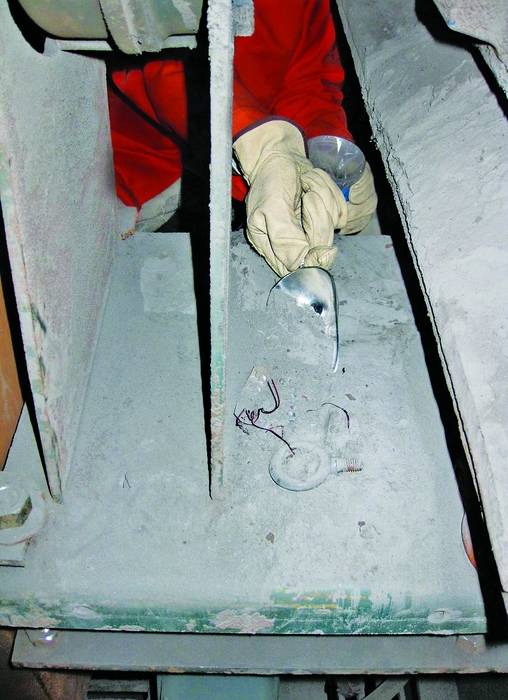 Credit: CSB
A buildup of combustible dust—in this case iron powder—at the Hoeganaes plant led to three accidents and the deaths of five workers last year.

During the first five months of last year, five workers died and three were injured in three separate accidents at the same Gallatin, Tenn., plant. All three accidents had the same basic trigger—the ignition of combustible dust. That’s the conclusion of an investigative report by the Chemical Safety & Hazard Investigation Board (CSB), released at a Jan. 5 press conference near the Tennessee plant owned by Hoeganaes Corp.

“These three accidents were entirely preventable,” says CSB Chairman Rafael Moure-Eraso, adding that since CSB was created in 1998, three of the four most deadly accidents it has investigated have been combustible dust explosions.

Dust explosion are not new. A 2006 CSB study found that 281 industrial dust accidents had occurred over a 25-year period, killing 119 workers and injuring 718. A more recent study by the Occupational Safety & Health Administration found that during the past decade combustible dust fires and explosions killed an average of seven workers each year. OSHA officials acknowledge the actual number might be higher as the agency does not closely track these accidents (C&EN, June 6, 2011, page 34).

Hoeganaes is appealing the penalties, according to a company official. The firm is an international manufacturer of a fine iron powder (45–150 μm) used to make parts for the auto industry. The Tennessee facility was built in 1978 and employs 180 workers. It is owned by GKN, a U.K. engineering firm.

The plant has a history of combustible dust problems, according to CSB investigator Johnnie Banks, who notes company documents show dust fires occurred as far back as 1992.

The first in the series of 2011 accidents happened on Jan. 31, when a dust explosion killed two maintenance workers who were trying to repair a bucket conveyor. When restarting the equipment, vibrations sent iron dust into the air, which was ignited by a spark from the restarted motor, CSB says. One worker died within hours; the other lived for four months before succumbing to burns.

A second dust-related accident on March 29 injured one worker. It occurred after dust was lofted and ignited during a furnace maintenance operation, CSB says.

The worst of the three accidents occurred on May 27 when dust and hydrogen sparked an explosion and fire that killed three more workers and injured two. It took place just 16 days after CSB had conducted an investigative hearing at Gallatin. Leaking hydrogen from a corroded pipe likely generated the initial blast that blew iron powder into the plant air where it ignited and rained down on the workers. Within a week, two workers had died, and seven weeks later the final death occurred.

According to CSB’s report, workers reported flash fires as well as smoke and dust so thick that visibility was limited to 3 to 4 feet. Since hydrogen and dust were both present, CSB said, it was difficult to specifically determine which fuel—if not both—directly caused the fatalities.

Along with deep dust, the board found an unenclosed system to transport the iron powder and numerous flat overhead surfaces where dust could accumulate. CSB also found that hydrogen, which is used in the powder manufacturing process, was flared inside the plant. The board’s primary recommendation was that OSHA propose the long-delayed dust regulation within a year.

OSHA says it is working on completing the dust regulation. The agency says in a statement that it is developing additional regulatory alternatives and doing economic analyses for a required review under the Small Business Regulatory Enforcement Fairness Act. Following that review, which is expected in 2012, the agency says it will issue a proposed rule. OSHA adds that it is not under a firm timeline and notes it will offer additional opportunities for comments before finalizing the rule.

In a statement, Hoeganaes does not cite dust as the three accidents’ cause and says they were unrelated accidents. It claims the plant “historically had a very strong safety record” but is now making several improvements, including developing “an industry-leading powder metal dust management system.”

The company voluntarily shut down briefly after the third accident but began to restart last July. TOSHA did not call for the shutdown or oversee the start-up, according to a Tennessee state official.

Along with the Jan. 5 report, CSB released a 14-minute video explaining the accident’s cause and impact; it begins with the wife of one of the workers killed in the factory recounting her first visit to the hospital.

Industrial Safety
The chemistry behind the Beirut explosion
Consumer Safety
Do we know enough about the safety of quat disinfectants?
Lab Safety
Adapting hijabs for lab safety
Share X
To send an e-mail to multiple recipients, separate e-mail addresses with a comma, semicolon, or both.
Title: Deadly Dust
Author: Jeff Johnson
Chemical & Engineering News will not share your email address with any other person or company.