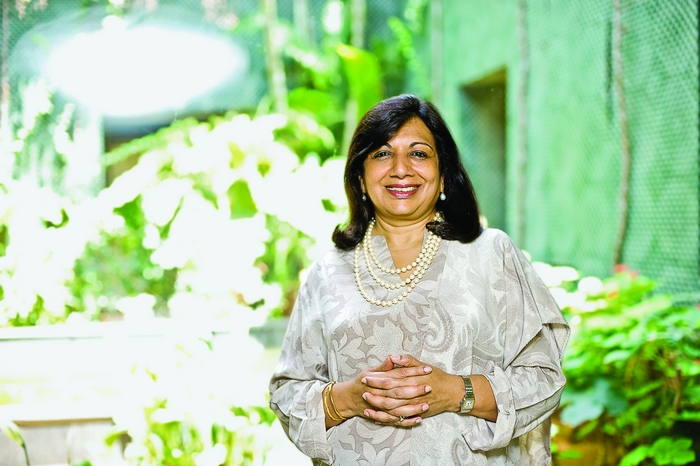 Hosting a discussion on biopharmaceutical industry leadership at the Biotechnology Industry Organization’s annual convention in Boston in June, Fareed Zakaria grilled a panel of industry and government leaders from the U.S., Turkey, India, and South Africa. Zakaria, who has covered international affairs for Newsweek, Time, CNN, and other news organizations, zeroed in on one panelist in particular: Kiran Mazumdar-Shaw, founder and managing director of Biocon, India’s largest biopharmaceutical company.

Mazumdar-Shaw, a business pioneer and philanthropist who has been called the richest self-made woman in India, is the kind of global rock star that Zakaria thrives on interviewing. And she did not disappoint in Boston. Her observation that the process for bringing pharmaceuticals to market is unsustainable became the focal point of the discussion. The point was made all the more interesting with Mazumdar-Shaw’s contention that the cycle of innovation, development, and commercialization in pharmaceuticals may be reinvented in Asia.

Mazumdar-Shaw is forcefully outspoken, which one would expect of a person who breaks the gender barrier in India. She is also a pragmatist. When faced with the insurmountable resistance she encountered trying to become a female brewmaster at her father’s brewery in the 1970s, Mazumdar-Shaw decided instead to put her biotech-heavy degree from Australia’s Melbourne University to work in an industry in which a male-dominated culture was less well established: pharmaceuticals.

But a business pioneer in the drug industry cannot avoid the kind of regulatory barriers that Mazumdar-Shaw views as roadblocks to innovation and to health care in the developing world. This time she is committed to trying to change an established system.

In an interview with C&EN after the panel, Mazumdar-Shaw turned the discussion promptly to regulators’ hang-ups over new technology—a phenomenon that extends well beyond the pharmaceutical enterprise. “Why is it that the tennis federation is so reluctant to adopt the Hawk-Eye?” she asked, referring to a computer that tracks a ball’s trajectory in a tennis match. “It is a simple, technological intervention that basically removes all human error from judgment.”

The situation on the tennis court exemplifies reluctance by any regulatory entity to cede authority to new technology, regardless of its usefulness, Mazumdar-Shaw said. In the drug industry, new technology promises to cut the decade-long odyssey of drug discovery, development, and human clinical trials.

“There is so much in vitro, in vivo, and in silico technology available today to look at safety and look at efficacy,” she said. The use of these technologies allows for smaller, more targeted trials that “shrink timelines and cost of development.”

Instead, Mazumdar-Shaw said, the authorities are pushing in the opposite direction. Faced with both an onslaught of new science and the need for drugs that address unmet medical needs, Western regulators have raised the bar on proving a drug candidate’s safety and efficacy. Regulators are also hoping to stem the tide of so-called me-too drugs intended to compete with existing therapies in well-served markets.

Mazumdar-Shaw dismisses the argument that drugs create a public safety imperative mandating stricter oversight than many other regulated products. “So you think passenger safety is any less important than patient safety?” she asked. Yet aircraft makers don’t face a 12-year, all-or-nothing proposition when designing, developing, and commercializing an airplane. Nor, she added, does Boeing have to prove that it is making something fundamentally different than what Airbus already has on the market.

“So what if there are me-too drugs?” she asked. “Doesn’t that create a good choice for patients? By the way, there is no such thing as a me-too drug.” Mazumdar-Shaw argued that the industry’s path forward will be characterized by companion diagnostics and an increase in personalized medicine—both trends that depend on the availability of a broad selection of therapies.

India’s drug industry has started working with regulators to improve drug commercialization and access, Mazumdar-Shaw noted. For example, the Association of Biotechnology Led Enterprises, a trade association in the country, worked with Indian authorities to arrive at a guideline for biosimilars, and several Indian states have also installed an online system for managing drug supply chains.

“The next steps are to create electronic health records that will help to measure health outcomes, and disease-burden mapping to better forecast inventory and budget planning. Once all this is done, it will be among the most advanced models globally in terms of affordable health care,” Mazumdar-Shaw said.

But can Asia also lead the way on cutting developmental costs and timelines? Perhaps, Mazumdar-Shaw said, once international regulatory authorities establish mutual recognition of regulatory approvals. But what is more certain is that new technology will inevitably make its way into the system.

“If you ignore what technology has to offer,” she said, “somebody sooner or later is going to adopt that technology, whether patient advocacy groups or some smart company in some geographic area you never thought was possible.”