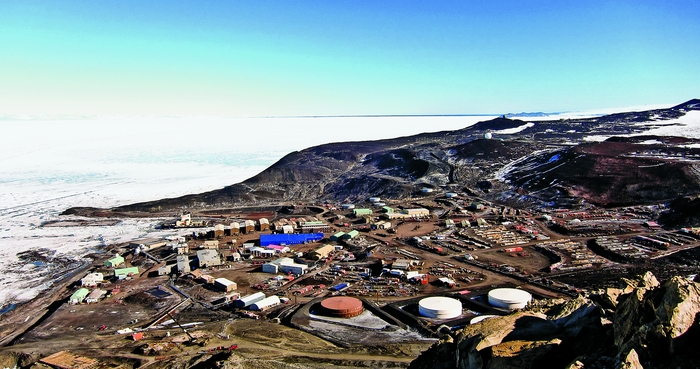 Credit: Eric Niiler
NSF’s McMurdo base is in dire need of repairs.

Researchers working in Antarctica—including some chemists—are bracing for the possibility of cuts made to their budgets as a means of finding money to fix aging U.S. polar bases that are in serious disrepair. The repurposing of science funds for base renovations is the main recommendation of a blue-ribbon panel appointed by the National Science Foundation to look at the agency’s Antarctica bases.

The panel found that conditions at the main U.S. base at McMurdo Station have been declining because of a lack of maintenance and that inefficient logistics and transportation are slowing down vital science.

“The essence of our findings is that the lack of capital budgeting has placed operations at McMurdo, and to a somewhat lesser extent at Palmer Station, in unnecessary jeopardy—at least in terms of prolonged inefficiency due to deteriorating or otherwise inadequate physical assets,” says the panel in a letter to NSF Director Subra Suresh and White House science adviser John P. Holdren.

The report found plenty of problems at McMurdo, a small city that houses 1,100 scientists and support staff during its peak season: overcrowded housing, outdated medical facilities, a single dishwasher for the entire cafeteria, and a warehouse where the forklift has to avoid weak sections of the floor so it doesn’t collapse into the snow and ice.

At Palmer Station, a smaller research facility on the Antarctic Peninsula, the base pier is falling apart and an underwater rock spire prevents cargo ships from off-loading gear. More worrisome is that parts of both bases lack proper fire-suppression measures.

Panel Chairman Norman R. Augustine, former chairman of Lockheed Martin, says that because of a tight federal budget the panel doesn’t expect to get additional money from Congress. So the panel proposed shifting around existing NSF funds for the next four years to pay for the repairs.

That means a 6% cut in overall Antarctic science funding, a 6% budget increase for capital improvements, and a 20% cut in contractor personnel. In 2012, NSF spent $300 million on Antarctic programs.

Researchers such as Oscar Schofield, a biogeochemist at Rutgers University, worry about cannibalization of the Antarctic science budget.

“Anytime you take away from the science it is a shame, because the Antarctic is so undersampled yet so important for a lot of global questions,” says Schofield, who deploys autonomous underwater gliders around Antarctica to measure the uptake of carbon dioxide by marine phytoplankton. “On the other hand, if the infrastructure starts falling apart, it’s not safe to work and the cost of building everything up later will be astronomical.”

Schofield says that if NSF decides to enact the recommended across-the-board cuts to all of the existing Antarctic science projects, “it ends up weakening everything. Likely what will happen is that there will be fewer new projects, and ideas or questions that should be pursued will have a much lower probability of getting money.”

Panel member Hugh Ducklow, director of the Ecosystems Center at the Marine Biological Laboratory in Woods Hole, Mass., says he’s gotten several calls already from scientists worried about whether their projects could face the ax.

“Everybody is asking about that 6% number,” Ducklow says.

Even if some projects are spared, it’s likely that principal investigators will be purchasing more of their own gear and supplies if they want to work in Antarctica.

“Everybody used to have most of their consumable supplies and chemicals provided by the contractors,” says Ducklow, who studies carbon flux in the Southern Ocean and runs the Long Term Ecological Research project at Palmer Station. “You would check off the things you would need, and you would have an unlimited bank account. All of a sudden it’s our money, and we’re careful how we spend it.”

In other recommendations, the panel says NSF should build a bigger runway at the Amundsen-Scott South Pole Station so the larger C-17 wheeled cargo planes can fly there to deliver supplies. That would free up four existing ski-equipped C-130 aircraft to airlift more people and gear to remote science camps.

The panel also wants to reduce NSF’s Antarctic carbon footprint by building several additional wind turbines at McMurdo as well as burning scrap wood, garbage, and waste oil to produce energy instead of sending refuse to a California landfill, as is currently done. That should help reduce the station’s fuel costs, which are eight times greater than their purchase price because of the enormous costs of transporting it from the refinery to Antarctic outposts.

NSF Director Suresh says he plans to look carefully at the report before making any decisions. “In this economic environment, if we want to keep science at the forefront and we want to operate more efficiently, how do we do it?” Suresh asks. “This is something we need to look at. If we delay, it costs a lot more later.”