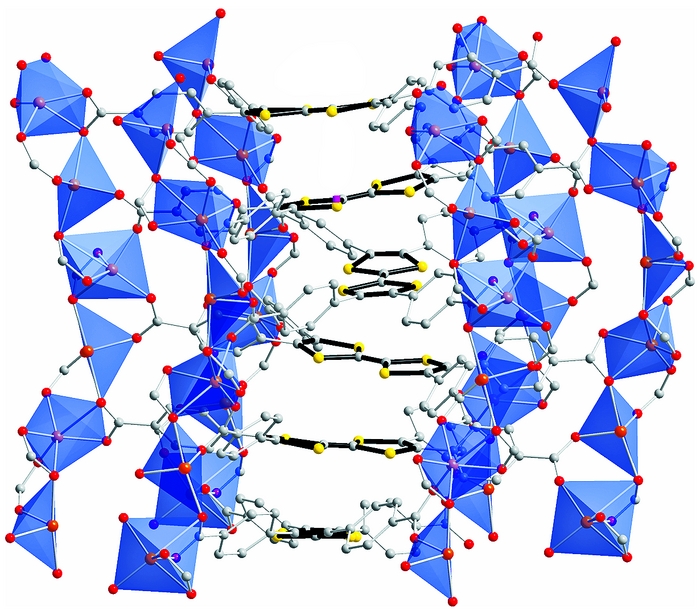 A new sulfur-and-zinc-based metal-organic framework (MOF) compound conducts charge nearly as well as the most conductive organic semiconductors, a team of researchers based in the U.S. and Japan report in the Journal of the American Chemical Society (DOI: 10.1021/ja3059827). The study demonstrates that a typically nonconducting family of materials can be tuned synthetically to conduct charge, an advance that may lead to applications in electrochemistry and electronic materials. 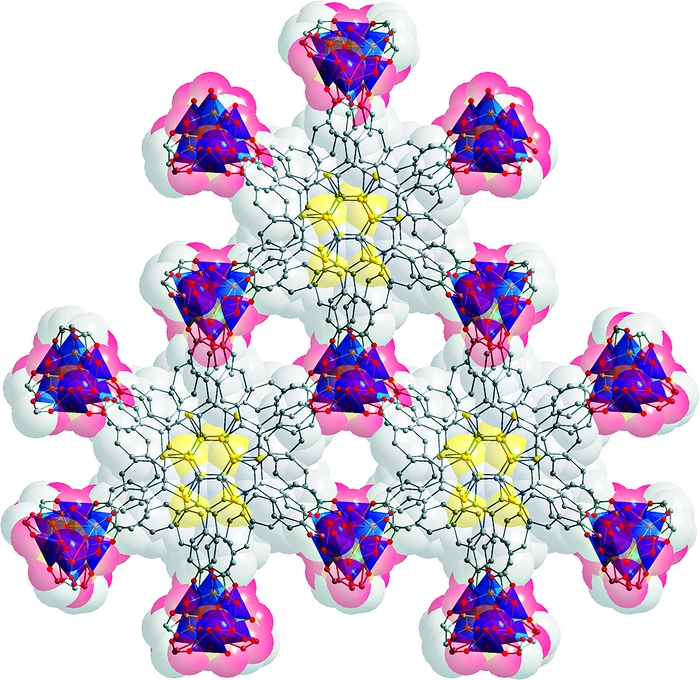 MOFs are crystalline materials composed of metal ions or clusters that are connected by organic linker groups. The materials’ extreme surface areas and porosities have led to numerous record-breaking demonstrations and some commercialization of MOFs in gas separation and storage applications.

Exceptionally high surface area and porosity could make these materials promising candidates for use in other areas such as fuel cells. But MOFs’ inherently low charge mobility and conductivity—a result of linking metal ions with redox-inactive organic groups—effectively rule out such applications.

Strategies to boost the conductivity of MOFs, for example by using linkers that mediate covalent interactions with metal ions, have been largely unsuccessful. Some modified MOFs remained poor charge conductors while others lost their porosity when the solvent molecules were removed from the crystals.

To resolve those problems, MIT chemists Tarun C. Narayan and Mircea Dincă drew upon studies showing that tetrathiafulvalene (TTF), an organosulfur compound, can form π-stacked columnar structures, a feature that makes some materials good electronic conductors. The aim of the team, which includes researchers at Osaka University, was to use TTF groups to prepare a stable porous compound in which π-stacked columns could provide a conduit for charge mobility.

The strategy paid off. The group coupled TTF with a bromobenzoate compound and treated the product, TTF-tetrabenzoate, with a zinc nitrate solution, thereby forming dark-red needles. Crystallography analysis shows that the new MOF features helical Zn-carboxylate chains and TTF-benzoate-lined pores roughly 5 Å in diameter. Other analytical techniques indicate that the level of charge mobility, a measure of conductivity, in the material is comparable to that of common organic semiconductors.

Materials with this combination of properties are rare, she says, even though numerous MOFs have been prepared. Feng adds, “There is no doubt that this work will inspire a great deal of enthusiasm in conducting MOFs” and could lead to applications in solar cells, electrocatalysis, sensing, and other areas beyond gas separation and storage.

Electronic Materials
Chemistry in Pictures: Blooming brilliant
Materials
Fluorescent materials are the brightest ever made
Biomaterials
Fruit’s metallic blue caused by lipid nanostructures
Share X
To send an e-mail to multiple recipients, separate e-mail addresses with a comma, semicolon, or both.
Title: New MOFs Are Conductive
Author: Mitch Jacoby
Chemical & Engineering News will not share your email address with any other person or company.