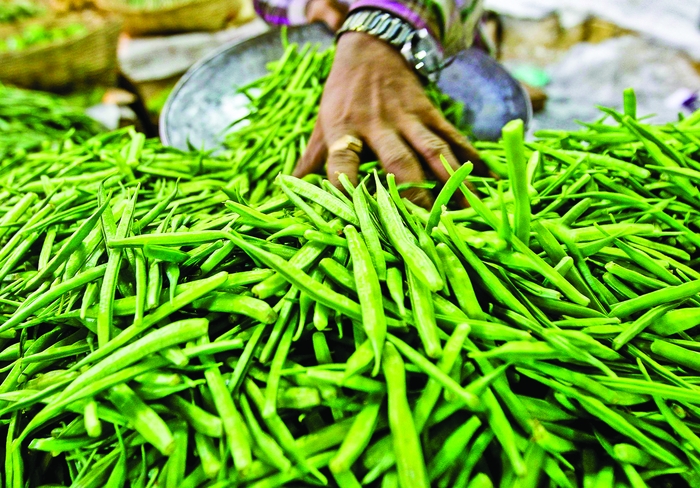 Credit: Amit Dave/Reuters/Newscom
Guar pods can be eaten whole or opened for their beans.

Ice cream and hydraulic fracturing for oil and gas would seem to have little in common. But it turns out they are closely linked by guar, an obscure shrub with a bean that has become expensive and hard to find.

Guar is one of the few crops that grow well in India’s Rajasthan state, an arid region in the north of the country that is the world’s main source of guar. Farmers eat the plant’s pods and feed them to their cattle as well. They also sell its beans to processors who grind them into a gum marketed as a thickening and emulsifying agent.

Until a couple of years ago, the food industry was the main consumer of guar gum, adding it to everything from ice cream to salad dressing to corn muffins. The hydro­colloid was also consumed in modest amounts in drilling fluids used by the oil and gas industry.

But then the oil industry discovered guar could help it extract previously unretrievable hydrocarbons from shale formations via a combination of horizontal well drilling and hydraulic fracturing. Drillers perfected a method of forcing water, chemicals, and sand into deep underground rock, causing fractures to open. The so-called fracking process leaves behind specialized sand, called proppant, that holds the fractures open and allows oil or gas to seep out.

Guar’s role is to carry proppant to the deepest regions of the fracture by suspending it in the same way it suspends bits of garlic and green pepper in a salad dressing, explains Dennis Seisun, who runs a San Diego-based hydrocolloid consulting firm called IMR International.

No other hydrocolloid, Seisun says, offers guar’s unique combination of properties. It can be cross-linked with metals to better carry the proppant, then chemically “broken” to a lower viscosity when its job is done. That guar is a benign ingredient used in food is also important to the drilling industry, which has come under scrutiny for its environmental impact.

And much guar is grown. Seisun estimates that the oil and gas sector now consumes 300,000 to 400,000 tons of guar per year. Most other hydrocolloids aren’t available in those volumes, he says, and the ones that are—xanthan gum and carboxymethyl cellulose—don’t “break” as well as guar does.

Not surprisingly, guar’s rapid adoption by the oil and gas industry has caused a rapid escalation in its price. Just two years ago, Seisun says, industrial-grade guar sold for less than $1.00 per kg. Today, the price hovers around $10 per kg.

With the oil industry scooping up guar at high prices, consumers in other sectors are forced to look elsewhere for their hydrocolloid needs. Firms active in gums and specialty chemicals are only too happy to oblige.

At the Institute of Food Technologists’ annual meeting and show in June, the specialty chemical maker Ashland debuted two new grades of carboxymethyl cellulose, also known as cellulose gum, for food and dairy applications. “With guar prices increasing 10-fold over the past year, a growing number of customers have approached us asking for alternatives,” said Laurie Kronenberg, new product leader for Ashland’s nutrition specialties unit.

Ashland said it commissioned a food-tasting panel that found no significant difference between ice creams with guar gum and those using its Aquacel cellulose gum.

Replacing guar in food applications isn’t easy, cautions Joshua Brooks, general manager of Gum Technology, a gum supplier in Tucson. “Guar was always the go-to gum because it is a good thickener with moisture-binding capabilities, and it synergizes well with other gums,” he says.

Different applications call for different substitutes, Brooks says. For example, Gum Technology’s Hydro-Fi line combines citrus fiber with gums such as xanthan and tara to replace guar in muffins, cakes, and other baked goods. One of the firm’s Coyote Brand stabilizers combines cellulose gum, maltodextrin, and carrageenan for use in frozen dough, tortillas, and flat breads.

Drilling firms are also looking for guar replacements. The gum’s new importance to the industry came into focus late last month when Halliburton, one of the world’s largest oil-well service providers, announced a 19% drop in its second-quarter operating income in North America. The firm blamed “escalating costs associated with guar gum.”

On a conference call with analysts, Chief Executive Officer David J. Lesar went further, explaining that Halliburton miscalculated during the quarter when it bought a “strategic guar reserve” to ensure it had supplies on hand. Subsequently, prices dipped, supplies became more available, and the firm was left with high-priced inventory. “We bought too much guar too early and paid too much for it,” Lesar said.

Seeking to decouple itself from the volatile commodity, Halliburton is developing guar-free drilling fluids. In its earnings announcement, the firm revealed a new fluid that replaces guar with an undisclosed “derivatized natural polymer.”

The success or failure of the new drilling fluid will go a long way to determine whether ice cream makers can stop worrying about what happens in the oil field.