Teaming Up For Biobased Chemicals 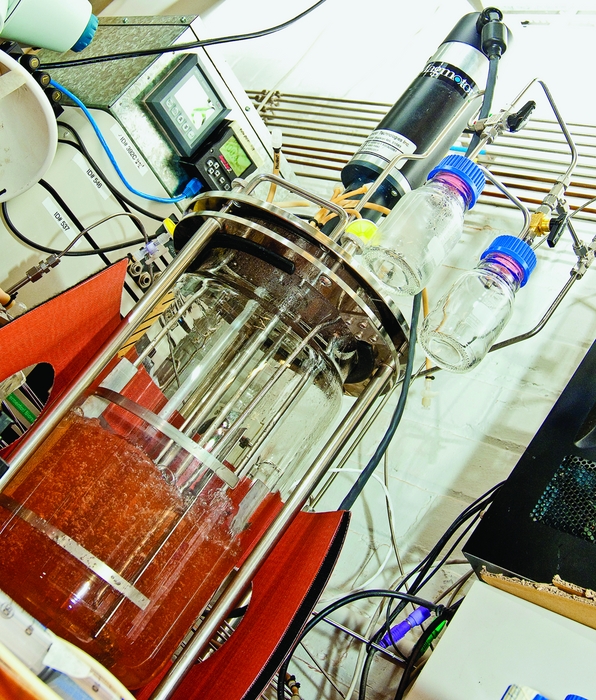 To make products from renewable feedstocks and environmentally friendly processes, chemical makers have tended to rely solely on conventional chemical processing or biological processing, not both.

Recently, a few companies have shown at the large-demonstration-plant scale that combining chemical and biological methods is a viable and advantageous route for converting a variety of starting materials, including biomass, to fuels and a handful of chemicals. At the laboratory scale, academic researchers have shown that the hybrid approach can produce a number of so-called platform compounds—intermediates—that in turn can be converted into a wide variety of commercially valuable chemicals.

Developing commercially viable biobased substitutes for petrochemicals is an enormous challenge, says Brent H. Shanks, a chemical engineering professor at Iowa State University. Shanks is the director of the National Science Foundation Engineering Research Center for Biorenewable Chemicals (CBiRC). The best way to succeed at that challenge, he proposes, is “to combine the inherently high levels of chemical and stereochemical selectivity of biosynthetic pathways with the superior efficiency of chemical catalysis.”

For example, Shanks says, carbohydrates can be selectively deoxygenated to a given platform compound and then upgraded to valuable products “by using a biocatalyst on the front end and a chemical catalyst on the back end.”

Joseph J. Bozell, a professor of biomass chemistry at the University of Tennessee Forest Products Center, sees enormous potential in such a combined approach for several reasons. One of the main ones, he says, is that the chemical processing step can be mediated by various classes of catalysts. For example, organometallic catalysts can convert intermediates via a rich assortment of chemical transformations to a large variety of compounds. Bozell’s research group is studying ways to use lignin, one of the main components of plant cell walls, as a starting material in such a hybrid process.

In a recent study demonstrating the variety of compounds that can be obtained by coupling chemical and biological processing, James A. Dumesic, a chemical engineering professor at the University of Wisconsin, Madison, and a CBiRC member, teamed up with Shanks and others to develop procedures to produce high-value products from a previously unexplored platform chemical—triacetic acid lactone, which is a 2-pyrone compound (Green Chem., DOI: 10.1039/c2gc35343a).

The pyrone was synthesized from glucose by Escherichia coli and a yeast species, Saccharomyces cerevisiae, that were genetically modified by Joseph P. Noel of the Salk Institute for Biological Sciences and Nancy A. Da Silva of the University of California, Irvine.

Dumesic and coworkers found that the pyrone undergoes ring opening and decarboxylation to 2,4-pentanedione, also known as acetylacetone. This dione, which typically is prepared from acetone and ketene, has several commercial applications, including in metal extraction, in metal plating, and as a fuel additive.

The team also explored hydrogenation, dehydration, ring closing, and other reactions to transform triacetic acid lactone to various chemicals. Among other findings, the group observed that the pyrone could be converted to dienoic acid. This compound’s knack for inhibiting the growth of various mold and bacteria makes it useful as a food and feed preservative. Dienoic acid is usually produced from petrochemical sources.

The pyrone can also be converted to hexenoic acid, which can be used as a flavoring agent, and γ-caprolactone, a fragrance and cosmetics ingredient.

“Historically, people have approached biobased chemicals with a single target in mind,” Shanks points out. In contrast, the CBiRC team, which includes some 35 faculty and staff members from several institutions across the U.S., aims to develop generalizable technology that can be used to make a wide variety of chemical products.

VERSATILE
[+]Enlarge
Triacetic acid lactone may serve as a new “platform” to produce a range of biobased chemicals.

Triacetic acid lactone may serve as a new “platform” to produce a range of biobased chemicals.

The pyrone study exemplifies what can be done by bringing together people with diverse backgrounds, Shanks remarks. In the absence of this type of collaboration, he explains, chemical catalysis researchers would have had no reason to investigate the chemistry of triacetic acid lactone, and biocatalysis people wouldn’t bother making it, thinking that no one had a use for it.

Academic researchers aren’t the only ones interested in the pyrone and the hybrid processes in which it is used. Industry is also paying attention. Joseph R. Fox, director of emerging and external technologies at Ashland, says the chemical company is interested in biobased chemicals—for example, biomass-derived monomers—“as cost-effective alternatives to petroleum-based raw materials.” Fox clarifies that Ashland is not in the business of making those monomers. Rather, it seeks partners that can provide the company with those materials.

Ashland, which is one of CBiRC’s 27 industry members, uses biomass-derived monomers to produce its Envirez line of biobased unsaturated polyester resins, used in composite panels for boats, tractors, and other applications. Fox says Ashland continues to search for bioderived “drop-in” substitutes identical to petroleum-based monomers and for new biobased compounds to make resins that outperform today’s products.

According to Holmgren, LanzaTech’s microbes can also produce 2,3-butanediol, which can be converted to other compounds such as 1,3-butadiene, a monomer used to make synthetic rubber. To explore that conversion step, the company recently teamed up with catalysis specialists at Pacific Northwest National Laboratory.

In 2009, Coskata began operating in Madison, Pa., a plant that can produce tens of thousands of gallons of ethanol per year from wood chips. The company has since developed expansion plans. “We are now undertaking financing for our first full-scale commercial facility,” says Coskata CEO William J. Roe. He adds that the plant is scheduled to be up and running in 2014.

“Mother Nature can do pretty amazing things in terms of selectivity,” Ashland’s Fox says. “But sometimes she makes compounds that don’t have a double bond or have one too many hydroxyl groups for one application or another. That’s where coupling a biological process with a conventional catalytic step can provide us with exactly the product we need,” he says.

To download a PDF of this article, visit http://cenm.ag/triacetic

Where is the DOI for this article? It is often very difficult to cite articles in C&EN because of this problem.