[+]Enlarge
Credit: J. J. Delgado Jaén and M. Cargnello
Assemblies such as this one, with a palladium oxide core (blue) and a ceria shell (green and red), deposited on an alumina surface, form a catalyst for the reaction CH4 + 2 O2 → CO2 + 2 H2O. Reagents and products are at top left and right, respectively (carbon is gray, hydrogen is white, and oxygen is red). 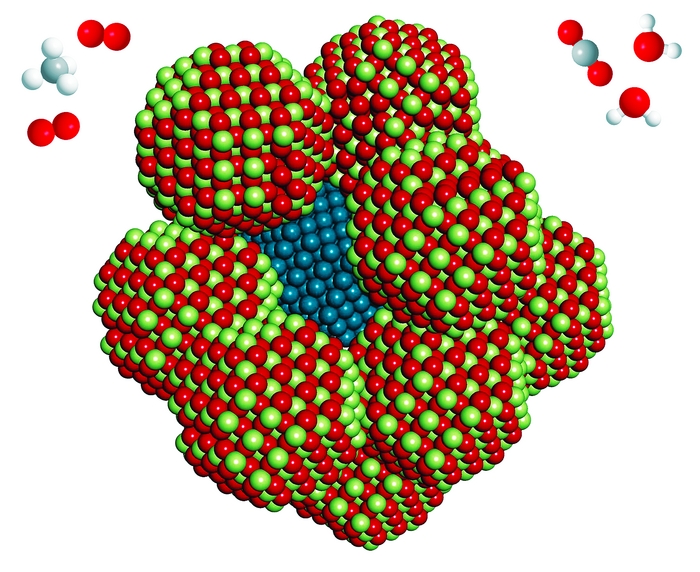 Credit: J. J. Delgado Jaén and M. Cargnello
Assemblies such as this one, with a palladium oxide core (blue) and a ceria shell (green and red), deposited on an alumina surface, form a catalyst for the reaction CH4 + 2 O2 → CO2 + 2 H2O. Reagents and products are at top left and right, respectively (carbon is gray, hydrogen is white, and oxygen is red).

A new Oxidizing catalyst could lead to practical ways of scrubbing methane from motor vehicle exhaust. It could also lead to methods for obtaining more efficient combustion in, and reduced emissions from, industrial turbines fueled by natural gas, which is composed primarily of methane.

Methane is a potent greenhouse gas, an atmospheric substance that absorbs and emits radiation in a way that tends to warm Earth’s surface. Up to now, it has not been practical to reduce methane emissions in auto and truck exhaust because conventional methane-oxidation catalysts only begin to work at 400 °C, a typical exhaust temperature in vehicle tailpipes. In addition, existing catalysts tend to break down when exhaust temperatures get a lot hotter, such as when vehicles climb steep inclines or are driven very fast.

Now, a catalyst that oxidizes methane completely at 400 °C has been developed by catalysis and energy specialist Raymond J. Gorte of the University of Pennsylvania, catalyst expert Paolo Fornasiero of the University of Trieste, in Italy, and coworkers (Science, DOI: 10.1126/science.1222887). It hasn’t been fully tested under real-world conditions that might cause it to fail or work poorly, but it could lead to catalysts that would pass such tests.

The new catalyst consists of supramolecular structures distributed on an alumina support. The supramolecular structures have a “core-shell” design: A palladium oxide core is linked by metal-ion/ligand coordination to a protective shell of cerium oxide structures. The alumina support is specially treated with an organosilane to make it hydrophobic, enhancing its compatibility with the core-shell structures, which are also hydrophobic.

The catalyst accelerates methane oxidation more efficiently at lower temperatures than others tested. Some previous catalysts achieve complete methane conversion only at temperatures greater than 600 °C. And some degrade at temperatures above 600 °C, whereas the new catalyst remains intact at temperatures of up to 850 °C.

The researchers have not yet tested the catalyst’s ability to oxidize methane in a vehicle-exhaust medium containing catalyst-disabling components typically found there, such as sulfur compounds, oil-additive components, and steam.

Edman Tsang of Oxford University, an expert on catalysis and clean energy, says: “There is a tremendous need to remove small amounts of methane from the exhausts of gas turbines and internal combustion engines and from flue gases in petrochemical and related industries. The generally low activity of conventional catalysts and their instability at high temperatures” have made it difficult to meet this challenge, whereas the new catalyst makes a first step toward a solution. The approach needs further assessment but provides “a clear direction” for future research, he says.

Friedrich Esch of the Technical University of Munich, who specializes in catalytic surfaces and clusters, agrees that the catalyst’s strengths and weaknesses need to be further evaluated, but says that “it’s a very effective system for methane combustion, and it’s this kind of systematic catalyst preparation control that paves the way for the rational design of tailored catalysts.”

In future work, Gorte, Fornasiero, and coworkers hope to learn more about the catalyst’s mechanism of action, to make modified versions with improved methane-oxidizing capabilities, and to create similar catalysts for other reactions.

Ionic Liquids
Chemistry in Pictures: Papa’s got a brand new solvent
Materials
Fluorescent materials are the brightest ever made
Biomaterials
Fruit’s metallic blue caused by lipid nanostructures
Share X
To send an e-mail to multiple recipients, separate e-mail addresses with a comma, semicolon, or both.
Title: Catalyst Could Zap Methane Emissions
Author: Stu Borman
Chemical & Engineering News will not share your email address with any other person or company.

Comments
Michael Easton (August 14, 2012 1:59 AM)
Interesting idea. What is the toxicology profile of the catalyst?
Reply »