Second-quarter results: Sales dipped 1.1%, earnings dropped 6.1%, profit margin shrank from 10.0% to 9.5% NOTE: All sales, earnings, and profit margin data are based on the chemical companies listed on page 20.

U.S. chemical firms are running out of dependable strategies for maintaining earnings in a global economy that shows few signs of growth. In the second quarter, the 23 firms tracked by C&EN reported an average decline in earnings of 6.1% compared with the year-ago quarter. And in the first quarter, earnings fell by 8.4%. 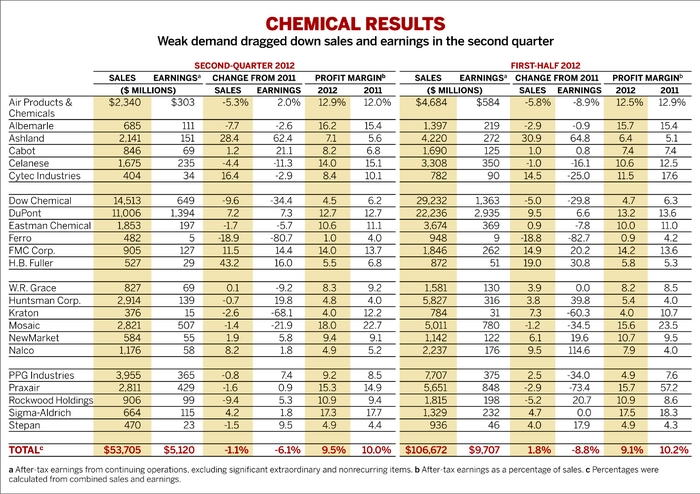 To download the chemical earnings tables and graphs, visit http://cenm.ag/chemearn2012.

Also in the second quarter—and for the first time since the Great Recession ended in 2009—more than half of the surveyed companies reported a decrease in top-line revenues. On average, the companies saw sales retreat by 1.1%. Chemical executives blame the drop on lower sales volumes because of customer destocking, depressed prices, and currency exchange losses due to a relatively strong dollar.

Until recently, even in the era of slow postrecession growth, the chemical industry succeeded in expanding sales while production grew slowly or not at all. Chemical firms focused on increasing prices of specialty and performance products, and they aimed product innovation at growing industries such as agriculture, food and nutrition, and electronics. Many firms also boosted sales by putting more emphasis on developing countries where economic growth outpaces that of North America and Europe.

But in the second quarter, only a few of those strategies were still working. To keep plants running efficiently at high capacity, many firms had to drop prices in order to move inventory, and several still reported selling less than last year. Prices for recently hot materials like titanium dioxide and electronic chemicals declined in the second quarter. The growth engines of Asia and Latin America have slowed considerably.

Dow earned $649 million, a decrease of 34.4% compared with the second quarter of 2011, and its sales declined 9.6% to $14.5 billion. The Michigan-based firm compounded the macroeconomic woes by initiating plant turnarounds in its commodity chemicals business. The downtime was responsible for half of a 6% decrease in the company’s overall plant operating rate, which averaged 78% for the quarter. In the end, Dow’s earnings per share of 55 cents fell short of consensus analyst expectations of 64 cents.

“The second quarter of 2012 was not Dow’s finest moment. Turnarounds and outages in capacity during a period of peak ethylene margins limited growth in commodity chemical income and probably reduced earnings per share by $0.10 for the quarter,” wrote Jeffrey J. Zekauskas, chemical analyst for J.P. Morgan, in a note to investors.

Across all of Dow, both prices and volumes decreased by 5% in the quarter compared with last year. There were a few bright spots in the earnings report, however. The volume of products sold in Asia grew by 2%. Dow’s agriculture business saw volumes jump by 10% and prices rise 2%. Overall, the Dow products that enjoyed the largest rate of growth were not chemicals at all: Seeds, genetic traits, and oils posted sales gains of more than 30% versus the year-ago period.

In contrast, the firm’s sales and prices were weak in electronic and functional materials, coatings, and performance materials. Dow’s performance plastics business saw volumes rise 3% on increased sales to Asia-Pacific, but prices declined 9%.

Andrew N. Liveris, Dow’s chief executive officer, told analysts in a conference call that the company has a portfolio of products that is “fit to fight.” However, Liveris said he does not expect global economic gains in the second half, and he increased Dow’s ongoing cost-cutting goal to $1.5 billion per year from $1.0 billion.

“Given Dow’s intention to ‘accelerate cost reduction and efficiency programs,’ we would expect announced restructuring efforts from Dow (primarily directed to Europe) over the coming three months and further cuts to capital outlays,” Zekauskas wrote.

The second-quarter report from DuPont was sunnier, as the company celebrated the one-year anniversary of its acquisition of the Danish food ingredient firm Danisco. As at Dow, a large and growing agriculture business was the core profit engine. DuPont reported that agriculture prices increased 7% and volumes were up 6%.

In a conference call with analysts, DuPont CEO Ellen J. Kullman said she expects a recovery in pricing for TiO2 and 5% growth in global automobile manufacturing this year.

But Robert Koort, chemicals analyst at Goldman Sachs, sees more clouds on DuPont’s horizon. “We believe that weakening TiO2 trends create risk to pricing and margins in the performance chemicals segment,” he remarked in a note to investors. “Furthermore, management’s second half of 2012 expectations for sales into the photovoltaic, auto [original equipment manufacturer], and safety and protection end markets seem optimistic to us.”

DuPont was not the only company to beat the second-quarter blahs thanks to a well-timed acquisition. The 2011 addition of International Specialty Products helped Ashland post a 28.4% increase in sales compared with last year. Moreover, its 62.4% gain in earnings was by far the largest of the 23 firms tracked by C&EN.

“We have now completed three full quarters since the acquisition of ISP, and our performance has steadily improved as we realize the strategic benefits of this higher-margin portfolio of businesses,” said James J. O’Brien, Ashland’s CEO, in an earnings report. Ashland’s businesses outside of its specialty ingredients segment did not have as successful a quarter.

In contrast, Eastman’s June 2012 acquisition of Solutia did not come in time to push sales and earnings into growth territory. Compared with the second quarter of last year, sales declined in its coatings, adhesives, specialty polymers, and inks segment as well as in its fibers and specialty plastics businesses. Revenues from performance chemicals were flat.

FMC Corp. found success in both agriculture and industrial chemical businesses. The firm’s crop chemicals revenues increased 19.4% to $394 million, thanks to robust sales in North America and Latin America. At the same time, FMC continued to expand profit margins for its peroxygens business by targeting specialty markets.

Most company CEOs sounded a note of caution about the second half of 2012. “We anticipate the ongoing challenging economic environment in Europe and the current growth rates in Asia will continue through the remainder of 2012,” Celanese CEO Mark C. Rohr told investors. In the second quarter, Celanese saw sales and earnings dip compared with last year, due in large part to weaker pricing in its large acetyl intermediates business.

Similarly, Dow’s Liveris sounded gloomy about near-term demand, telling investors, “Entering the second half of 2012, the global macro environment is not improving at the rate previously anticipated, and we have structured our business plans accordingly.”

Not surprisingly, Koort at Goldman Sachs has lowered earnings expectations for the rest of 2012 for Dow and Celanese, as well as for industrial gas firms Air Products & Chemicals and Praxair.

Dow, like many chemical firms, has made major sales inroads in developing countries in Asia, Latin America, and the Middle East, but 35% of its sales are still in the U.S. For this reason, the U.S. government’s 1.5% estimate of second-quarter economic growth only dampens expectations.

“July data continue to suggest that broader U.S. economic growth in the second half of 2012 will be weak, while the CAB also suggests a slowing of U.S. exports during the rest of the year,” Swift said. But the news is not all negative. “Looking at the data, one bright spot for the economy is the positive trends in the light vehicles and housing sectors, which could possibly suggest a forward momentum building in these sectors,” he pointed out.

To download the chemical earnings tables and graphs, visit http://cenm.ag/chemearn2012.