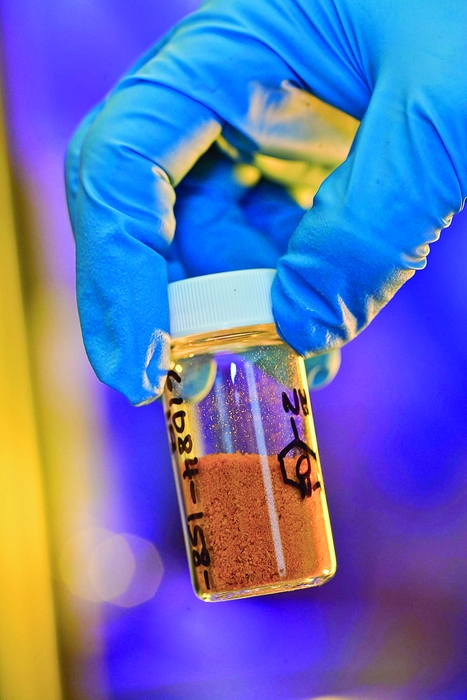 Credit: BMS
Bristol-Myers Squibb has had both big wins and setbacks in drug development.

Second-quarter sales plummeted at many big pharmaceutical companies as the full impact of patent expirations on top-selling products kicked in. Companies hit the hardest by generics competition are trying everything from acquisitions to geographic diversification to shore up their businesses.

For a second consecutive quarter, overall sales and earnings for the big pharma­ceutical companies tracked by C&EN declined. For the 10 companies reporting second-quarter results, sales were down 4.5% compared with the same period in 2011. Earnings fell 2.6%.

For AstraZeneca and Bristol-Myers Squibb (BMS), the impact of generics competition on leading products was pronounced. Despite efforts to offset the encroachment, both companies experienced double-digit sales and earnings losses in the second quarter.

Fresh generics competition for the instant-release version of the psychosis drug Seroquel accounted for the majority of the sales decline in the second quarter, AstraZeneca’s interim chief executive officer, Simon Lowth, told investors when the results were unveiled. Sales for the Seroquel franchise dropped 57% to $647 million in the quarter, with Seroquel IR revenues falling 75% to $277 million.

Sales erosion for two other drugs that lost patent protection also hurt the bottom line. Sales of the breast cancer treatment Arimidex dropped 16% to $147 million versus the year-ago quarter, and sales of the heartburn drug Nexium, which is facing competition from generics in markets outside the U.S., fell 13% to $949 million.

Confronted with a protracted period of sales decline, AstraZeneca has been on the hunt for late-stage and marketed products. At the end of the second quarter, it announced it was teaming with BMS to buy the diabetes drug firm Amylin Pharmaceuticals in a deal valued at $7 billion. The purchase brings three approved diabetes drugs, sales of which the companies say they can significantly expand through their existing marketing network.

For BMS, Amylin is the latest in a string of acquisitions in recent years intended to offset the long-looming loss of patent protection for the blood thinner Plavix.

Although the strategy has helped build a solid new-product pipeline, the arrival of generics competition for Plavix in May still had a serious impact. BMS sales fell 18.2% to $4.4 billion in the second quarter, and earnings were off by 16.8% to $808 million. Plavix sales plummeted 60% in the quarter to $741 million, while sales of Avapro, another blood thinner with a recent patent expiry, dropped 53% to $117 million. Excluding those two drugs, the company’s sales would have grown by 8%, BMS says.

Industry observers had until recently been upbeat on the prospects for BMS’s pipeline. The firm will soon start a Phase III clinical study of its anti-PD-1 immunotherapy BMS-936558 with lung cancer patients, putting it on track for completion in August 2014, more than a year earlier than expected, according to Leerink Swann stock analyst Seamus Fernandez. He expects the drug to hit the market in 2014 and bring in about $1.4 billion in annual sales by 2018.

And although BMS recently encountered an unexpected roadblock for its blood thinner Eliquis, analysts believe the potential blockbuster drug could reach the market next year. In June, the Food & Drug Administration asked BMS and its development partner, Pfizer, for more information from a large Phase III trial for Eliquis. Company executives told investors they would respond to the questions by September, meaning the agency would have until March 2013 to decide whether the drug should be approved. If it is, sales are expected to top $4 billion annually by 2018.

But the positive perception changed earlier this month when BMS revealed it had halted a Phase II trial of the hepatitis C treatment BMS-986094 after one person in the study had a serious heart-related issue. BMS-986094, which Fernandez calls “a key pillar” to the company’s growth strategy, came to BMS earlier this year through the firm’s $2.5 billion acquisition of Inhibitex. Although BMS has only put the trial on hold, some analysts view the drug as dead in the water. 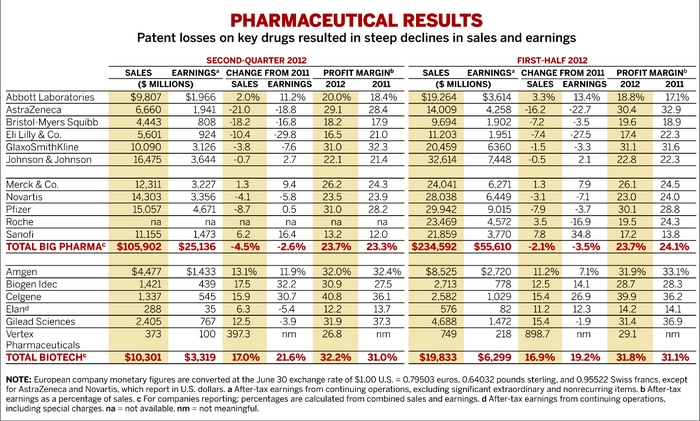 Meanwhile, Sanofi, BMS’s partner for marketing Plavix, says its years of preparation for the generics onslaught are paying off. Despite decreased sales of Plavix, Avapro, and a laundry list of other drugs whose patents expired in the last two years, Sanofi was able to post a 6.2% increase in second-quarter sales to $11.2 billion and a 16.4% jump in earnings to $1.5 billion. Sanofi points out that the last of its painful losses will come in August, when it loses U.S. patent protection on the cancer drug Eloxatin.

Sanofi’s business was buoyed by diversification and geographical expansion more than improvement in R&D. Sales in emerging markets grew by nearly 10% in the quarter to roughly $3.5 billion. Its consumer health care and animal health businesses saw similar strong gains.

GlaxoSmithKline, which has already gone through the worst of its patent losses, also benefited from a diversification strategy. Although pharmaceutical sales were down by 4%, growth in emerging markets and Japan buttressed results. GSK’s consumer health care business also helped the bottom line with 7% growth. Overall, the company saw a 3.8% dip in second-quarter sales to $10.1 billion; earnings fell 7.6% to $3.1 billion.

Like its competitors, GSK is making targeted acquisitions to rebuild its portfolio. In July, Human Genome Sciences accepted its $3.6 billion buyout offer, a purchase that will bring GSK full ownership of the lupus drug Benlysta and two drugs in Phase III studies.

At the same time, GSK says it is seeing a payoff from three years of efforts to make internal research more efficient and productive. “R&D output this last quarter has been remarkable,” CEO Andrew P. Witty said in a statement. He noted that 15 drug or vaccine candidates will report Phase III data this year. So far, 10 have offered positive results, and two have failed. If the pace of positive results continues, the company expects to launch eight new drugs and vaccines in the next two years.

“Whilst there is still much to be done to get these products registered, this marks the beginning of a new phase in pipeline delivery for GSK,” Witty said.

Roche is also seeing a healthy flow of projects through its pipeline. Since the beginning of 2011, 24 of 28 late-stage trials have produced positive results, and Roche’s overall pipeline now includes 72 novel compounds. And whereas many companies have pared therapeutic areas and cut drug development programs—AstraZeneca, for example, has weeded out more than 40% of its pipeline—Roche said in its second-quarter earnings statement that only four programs had been shed in recent months.

But developing those clinical-stage drugs is coming at a cost: Roche announced in June that it will close its storied Nutley, N.J., research labs as it tries to improve its profitability. The move will result in the loss of about 1,000 R&D jobs (C&EN, July 2, page 7). The company, which does not provide quarterly results, said sales for the first half of the year were up 3.5% to $23.5 billion but that earnings dropped 16.9% to $4.6 billion.