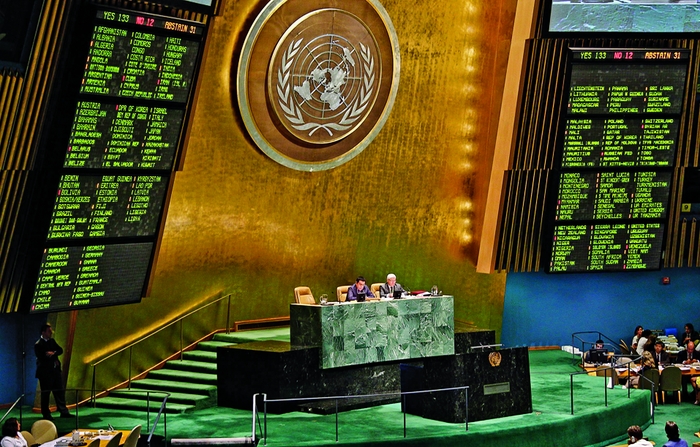 The United Nations General Assembly has overwhelmingly approved a resolution calling on Syria to maintain security around its chemical and biological weapons and condemning the regime for unleashing its military might against its civilian population.

Sponsored by Saudi Arabia, the resolution expresses “concern at the threat by the Syrian authorities to use chemical or biological weapons” and calls for “an inclusive Syrian-led political transition to a democratic, pluralistic political system.”

It demands that the Syrian regime refrain from using or transferring the weapons to “nonstate actors” and that it respect international obligations regarding those weapons. The U.S., Israel, and other nations are worried that if the weapons are not locked down and kept under strict control, militant groups might try to seize some of the munitions and use them in terrorist attacks.

The General Assembly adopted the resolution on Aug. 3, with 133 member nations voting in favor, 12 voting against, and 31 abstaining. In addition to highlighting the Syrian regime’s isolation, the legally nonbinding document could prod the more powerful UN Security Council into taking action to halt the bloodshed.

The Security Council could pass sanctions, and it could also authorize the use of outside military force. Thus far, it has been prevented from demanding that Syrian President Bashar al-Assad step down because of opposition by China and Russia. The two nations are permanent members of the Security Council and have veto power.

Syria is widely believed to possess a vast arsenal of operational-level chemical and biological weapons, including mustard agent, sarin, and possibly VX nerve agent. Syria is one of only eight nations in the world that have not joined the 1997 Chemical Weapons Convention, which prohibits the production, stockpiling, or use of chemical weapons.

The Organisation for the Prohibition of Chemical Weapons, The Hague-based body that monitors treaty compliance, says it “currently has no legal mandate” to conduct inspections in Syria “to verify the possible existence of chemical weapons or related activities.”

Syria, however, is a party to the 1925 Geneva Protocol, which bans the use of chemical and bacteriological methods of warfare.