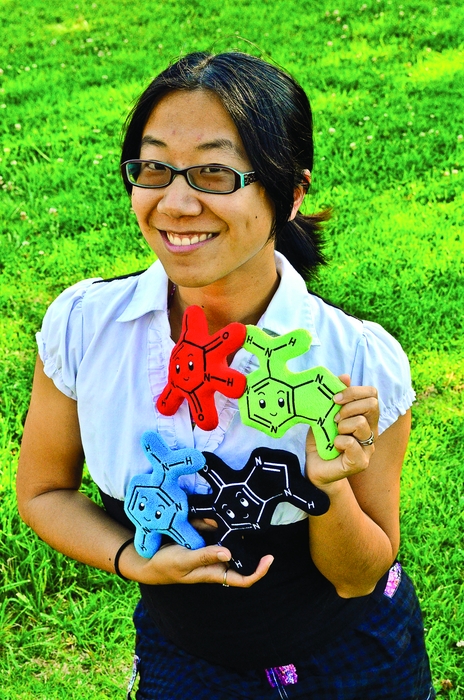 Crowdfunding websites such as Kickstarter that allow people to contribute small amounts of money to ideas they believe have commercial potential are lowering the activation energy for budding entrepreneurs to launch their own businesses.

Advice: Be willing to take a risk.

Jun Axup, 25, a chemical biology graduate student at Scripps Research Institute, used Kickstarter to raise more than $33,000 to create sets of plush dolls, called Biochemies, based on DNA bases. Axup’s two-month campaign, which ended this past January, was so successful that she raised more than four times her goal of $8,000.

The concept behind Kickstarter is that any visitor to the website can help back creative projects. In exchange, donors receive material rewards and other acknowledgments. Similar crowdfunding sites, such as Petridish.org and SciFlies.org, support scientific research (C&EN, Aug. 30, 2010, page 26).

Axup’s passion for outreach inspired her to create the DNA molecule plush dolls, which come in sets of four. Each smiley-faced doll is shaped like a DNA base: adenine, thymine, guanine, or cytosine. Small magnets that mimic hydrogen bonding connect the correct base-pair partners.

“Outreach has been a big part of my life because that’s how I got into science,” Axup says, noting that she participated in numerous outreach activities when she was in college. “I want to give back and inspire others to think scientifically.”

Three years ago, Axup, who dabbles in Web and graphic design, began posting some of her artwork online. “They began as doodles in my notebook of biology and chemistry things with smiley faces on them,” she says. She named her doodles Biochemies.

“Last January, I was playing with an Android plush doll and I suddenly had the idea to make my Biochemies into plush dolls.” The first one she made was shaped like a little Erlenmeyer flask with a smiley face, she says, adding that she had never sewn before.

She posted photos of her designs on Facebook and received an overwhelmingly positive response from friends and family, who encouraged her to make more of the dolls. A friend suggested she try using Kickstarter. Axup set a goal of $8,000 to cover the costs of producing roughly 500 sets of dolls.

In the first two weeks of her campaign, she received half of her requested amount. Then Kickstarter highlighted Axup’s dolls in its e-newsletter featuring noteworthy projects. That afternoon, donations began pouring in. “The e-mail went out at noon, and by one o’clock, I made my goal. I got $4,000 or $5,000 within an hour, and it kept going for a couple more hours,” Axup says.

“I was actually at a meeting, and my phone was continuously going off with notifications,” she says. “I was tingling. To see such a large amount of funding in a short period of time was very exhilarating.” All told, 857 supporters from around the world backed her project.

She initially hand-stitched each doll, but soon found a manufacturer in China to turn her design into a polished product. She solicited help from friends for the initial promotion and for shipping the orders. “We had a packing party where I basically coerced friends into doing free labor for me” in exchange for food, Axup says.

The experience taught Axup a few lessons about entrepreneurship. “The biggest thing I learned from the Kickstarter campaign is how much marketing matters,” she says. “Just having a Kickstarter webpage does not mean everyone will come and donate.” As she had predicted, her biggest supporters were scientists, science educators, and science enthusiasts.

She also found that getting plush dolls manufactured was more complicated than she originally thought. Between negotiations with China, safety testing, customs, and shipping, she was glad to have had the extra funding to cushion the expenses. With the Kickstarter support, she produced 1,000 sets of dolls to fulfill the orders, and the remaining start-up money will go toward producing more dolls.

Axup acknowledges that while Kickstarter gave her a taste of entrepreneurship and validated her product, she may follow the traditional route of creating a business plan and securing venture capital funding if she expands the business.

Although Axup does want to grow ­Biochemies, she will move things slowly until she graduates. She plans on selling the plush dolls on her website, biochemies.com, later this year.

For now, Axup is enjoying the fruits of her success, and the experience might even open some doors for her. “This was a mini-entrepreneurship experience, and it has been extremely educational.”

Graduate Education
Grappling with the decision to leave grad school
Graduate Education
The lukewarm chemist
Physical Chemistry
Chemists search for emoji
Share X
To send an e-mail to multiple recipients, separate e-mail addresses with a comma, semicolon, or both.
Title: Jun Axup
Author: Linda Wang
Chemical & Engineering News will not share your email address with any other person or company.