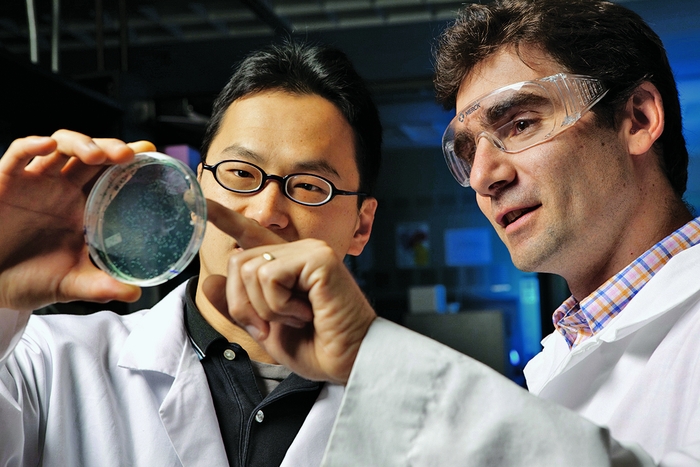 Back in his days as a Ph.D. student at the University of Maryland, College Park, Matthew P. DeLisa began daydreaming about engineering bacteria to make humanlike glycoproteins that could in turn find use as innovative drugs.

Profiled founder’s current role in company: Member of the board of directors

Advice: Hiring and retaining world-class staff is important; finding “A-level” talent is one of the biggest challenges for any company big or small.

It wasn’t until a decade later, however—as DeLisa joined the faculty of Cornell University’s School of Chemical & Biomolecular Engineering—that he and his group dove into research that began to turn his dreams into reality.

Eager to tap the commercial potential of his glycosylation concept, DeLisa joined with one of his first graduate students, Adam C. Fisher, to form Glycobia in 2009.

“The characteristics that make Matt a good scientist also make him a good entrepreneur. Most important, he has a willingness to take large, calculated risks,” says Fisher, who is Glycobia’s chief science officer. This attitude has served them well while they launched the company, Fisher adds.

Current methods to produce glycoprotein drugs—such as imiglucerase, which is used to treat Gaucher’s disease—rely on mammalian cell cultures. Glycobia hopes to further develop technology that would allow the firm to engineer Escherichia coli to efficiently produce a broad array of glycoprotein drugs faster and at lower cost.

The Glycobia technology takes a unique modular approach to building carbohydrate oligomers that can be positioned on proteins to achieve specific functionalities. It could lead to an array of drugs to treat a wide range of diseases, from cancer to multiple sclerosis, says DeLisa, 38, who remains an associate professor of chemical and biomolecular engineering at Cornell. “We like to think that the sky is the limit in terms of what we can conceive, and perhaps produce, in bacteria.”

That enthusiasm coupled with support from Cornell and from numerous federal small-business grants has helped the company grow to now include six full-time employees. Joining Fisher and DeLisa as cofounders is Chang B. Hong, an attorney who serves on the board of directors and provides support with business development and intellectual property (IP) issues. In addition, the company is benefiting from the entrepreneurial expertise of Robert S. Langer, the David H. Koch Institute Professor at Massachusetts Institute of Technology, who joined Glycobia’s board in May.

Initially, as DeLisa and Fisher launched Glycobia, they acquired an exclusive license from Cornell for access to key IP developed in the DeLisa lab. Cornell also provided critical support for the company by welcoming it as the first client in its McGovern Family Center for Venture Development in Life Sciences, a business incubator that opened on the university’s Ithaca, N.Y., campus in February.

“The transition to the McGovern Center has been a real game changer for us,” DeLisa says. The center “provides us with numerous benefits, including state-of-the-art lab space and direct access to talented Cornell faculty and core life science facilities,” such as DNA sequencing and mass spectrometry instrumentation, as well as a vivarium, he notes. “It will also help us in our efforts to recruit the best possible talent to our company and allow us to realize our scientific goals ahead of schedule.”

In addition to support from Cornell, Glycobia received significant funding from the National Institutes of Health in the form of six Phase I Small Business Innovation Research program grants and one Phase II SBIR grant.

“These awards are very competitive and designed to fund highly innovative, high-reward commercial research with the potential to significantly impact human health,” DeLisa says. “They are highly desirable for emerging companies because they are nondilutive, allowing young companies to grow and conserve equity for early investors.”

Glycobia is also one of only 40 companies nationwide to be admitted into NIH’s Commercialization Assistance Program, which provides the most promising emerging companies with free tools and business consultants to guide fund-raising and develop commercial innovations. The company has also received some funding from private investors.

As Glycobia has developed its glycoprotein expression platform, “technical challenges have come up every step of the way,” DeLisa admits. Still, “we have remained focused on a clear set of goals and feel that we are very close to some large breakthroughs,” he adds.

Others sense his determination. From his perspective as a board member, Langer describes DeLisa as “an extremely bright young scientist and engineer, who has such a passion for turning his discoveries into products that can help people.”

Glycobia’s Fisher makes a similar assessment. “Matt is off-the-charts optimistic and truly believes that we can use science to solve big, real-world problems,” he says. “Unlike some people who are content just participating in the science arena, Matt wants to see his science change the world.”

Profiles
Jesús Estrada, Merck chemist, on forging a career in science as an undocumented immigrant
Profiles
ACS Scholar alumna: Chyree Batton
Profiles
Podcast: A world without Rosalind Franklin
Share X
To send an e-mail to multiple recipients, separate e-mail addresses with a comma, semicolon, or both.
Title: Matthew DeLisa
Author: Susan J. Ainsworth
Chemical & Engineering News will not share your email address with any other person or company.