TEACH BY EXAMPLE
[+]Enlarge
Credit: Linda Wang/C&EN
Feig (standing) leads a discussion after one of the “teachable tidbit” sessions. 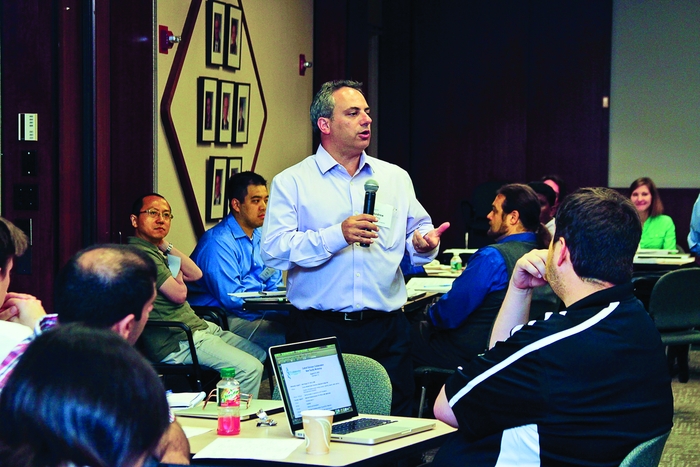 Credit: Linda Wang/C&EN
Feig (standing) leads a discussion after one of the “teachable tidbit” sessions.

New assistant professors typically get their jobs on the strength of their research. But research is only part of their duties. For many of them, about half of their job involves teaching. The problem is that—apart from having been teaching assistants in graduate school—few beginning professors have any experience in front of a classroom.

The Cottrell Scholars Collaborative New Faculty Workshop aims to fill this gap, giving beginning professors the basic training they need to succeed in the classroom. The event, held in Washington, D.C., last month, introduced 38 beginning chemistry professors to teaching methods designed to equip them for success in this important part of their jobs. The program was modeled after a long-running series of similar workshops for new physics and astronomy professors.

One of Feig and Waterman’s goals is to introduce new professors to teaching methods that they may not have experienced as students but that have been supported by education studies.

Feig and Waterman hope that the workshop will be a catalyst for improving chemistry education by catching young professors before they develop a lecture-only style of teaching that will be hard to unlearn. They also hope that the active-learning methods will make the new professors’ jobs easier.

The heart of the workshop was a series of five sessions in which each participant developed a “teachable tidbit.” They developed a plan for presenting one piece of content from one of their courses using methods other than conventional lecture, including a plan for assessing effectiveness. In the fifth session, participants presented the tidbit to their peers in a mock class.

The workshop didn’t focus just on teaching. In addition to the sessions on active-learning methods, it featured sessions on time management, student mentoring, and grant writing.

Participants found the experience worthwhile. Matthew F. Bush, entering his second year as a professor at the University of Washington, Seattle, plans “to try a range of techniques introduced at this workshop and evaluate what works well for my learning objectives and teaching style.” Megan C. Thielges, a new faculty member at Indiana University, Bloomington, notes that she is “better for teaching advice” and that she “particularly enjoyed the opportunity to get to know other starting faculty.”

The organizing committee, which also included Lane A. Baker from Indiana University, Linda Columbus from the University of Virginia, and William S. Jenks from Iowa State University, advertised by contacting chemistry department chairs at research universities. They hoped to attract 25 participants, which they thought would be a manageable size. They ended up with 38 participants. Several universities sent more than one faculty member.

The initial RCSA grant provides funds for two years. After next year’s workshop, continuation of the program will depend on getting disciplinary buy-in and finding another source of funding, such as the National Science Foundation, which funds similar workshops for physics professors.

The organizers are collaborating with Marilyne Stains, a chemistry education researcher at the University of Nebraska, Lincoln, to assess the both the short- and long-term effectiveness of the workshop. She plans to follow participants for up to five years and compare them with a control group who did not attend the workshops to determine whether the experience influenced their teaching style. Long-term success will involve a widespread shift from lecture-dominated teaching to student-centered learning and an acceptance of modern pedagogy, Waterman says, but such changes will take time. “If we can get people on board trying things and continuing the workshop beyond two years from now,” it will have been a success.

Diversity
Faculty, this is our time to be students
Career Tips
Zoomed out? Here’s how to manage expectations
Careers
Career Ladder: Joyce Nethery
Share X
To send an e-mail to multiple recipients, separate e-mail addresses with a comma, semicolon, or both.
Title: Boot Camp For Professors
Author: Celia Henry Arnaud
Chemical & Engineering News will not share your email address with any other person or company.

Comments
Bob Buntrock (September 11, 2012 4:01 PM)
Great programs. All too often, teaching at the college level is not emphacised enough. Good training for both new and established professors. I rfecently reviewed a book on academic careers (A Guide to Academia) where the author gave short shrift to teaching as a function of scientific professors at a research univeristy. I don't agree.
Reply »