Bringing Blue To A Plate Near You 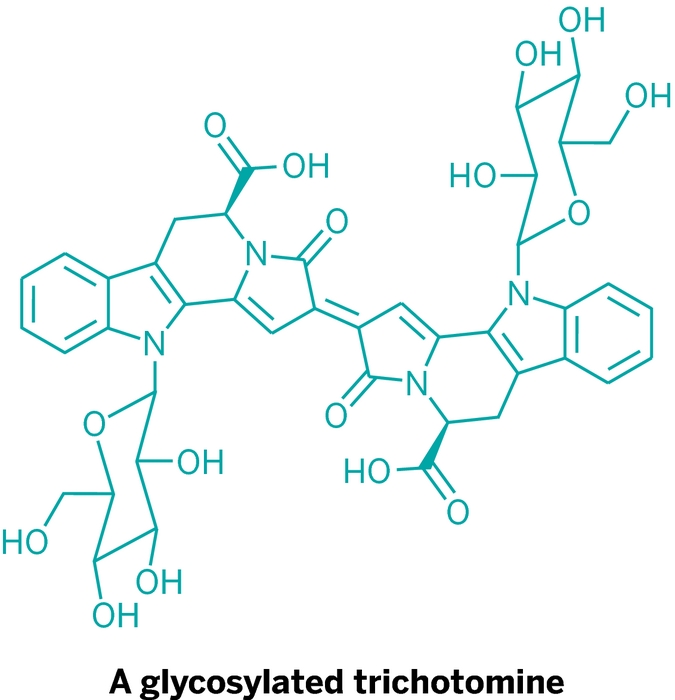 For a food industry searching to brand its products as “natural,” the color blue has long been a problem. But promising leads for natural blue food colorants have recently been plucked from the hot springs of Yellowstone National Park, the bottom of the ocean, and the berries of a wild Japanese shrub, according to work presented last month at the American Chemical Society meeting in Philadelphia.

The U.S. Food & Drug Administration has approved only two blue pigments for use in food, noted Andrew G. Newsome, a grad student at the University of Illinois, Chicago, in a talk in the Division of Agricultural & Food Chemistry. Both are synthetic coal tar dyes discovered in the 19th century.

Indeed, global sales of natural food colors amounted to an estimated $600 million last year, according to consulting firm Leatherhead Food Research. That figure was up by nearly 29% from 2007.

As far as natural colors go, “blue is a problem,” Lawson told C&EN. “It’s difficult to find blues in nature.”

Many of nature’s brightest blues, like those of butterfly wings and poisonous frogs, result from optical diffraction of light—there’s no pigment to isolate. Others, such as the blue of horseshoe crab blood, come from protein-based pigments that can’t stand up to food processing or the intense heat on a delivery truck parked in the sun.

Small molecules promise better stability and lower cost. But many of the known small-molecule blues in nature, such as the dusty-blue anthocyanins from blueberries, can’t stand up to changes in pH. Others pose toxicity concerns.

POOL OF INSPIRATION
[+]Enlarge
Credit: Tamar Barkay/Rutgers U
Zygogonium ericetorum, an acid-loving algae found in Yellowstone National Park hot springs, gets its purplish-blue color from a ferric gallate complex similar to the one shown. Looking on is Gill Geesey, a microbiologist at Montana State University’s Thermal Biology Institute who collected the algal sample for Newsome. 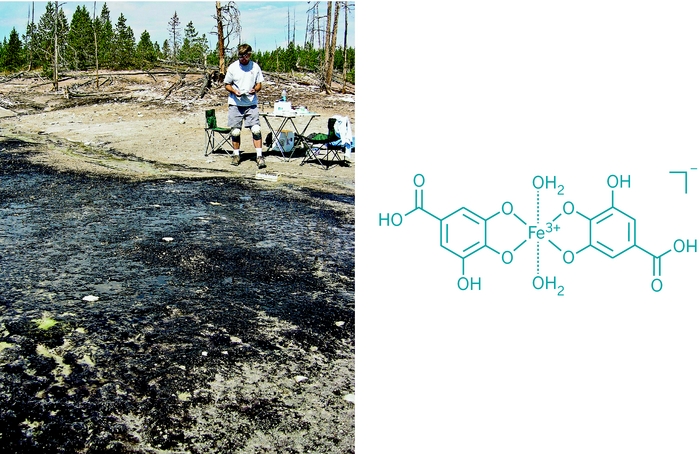 Credit: Tamar Barkay/Rutgers U
Zygogonium ericetorum, an acid-loving algae found in Yellowstone National Park hot springs, gets its purplish-blue color from a ferric gallate complex similar to the one shown. Looking on is Gill Geesey, a microbiologist at Montana State University’s Thermal Biology Institute who collected the algal sample for Newsome.

Working under the guidance of UIC natural products chemist Richard B. van Breemen, with funding from beverage giant PepsiCo, Newsome has spent the past few years searching for new blue pigments in nature. In particular, he wanted to find vibrant, nontoxic, and stable small molecules that can stand up to both heat and acid.

One of the first places he looked was Yellowstone’s acidic hot springs. While flipping through Flickr photos taken by visitors to the national park, Newsome noticed that a few pools bore a purplish-blue hue. Figuring whatever was responsible for this blue already had the heat and acid stability he was searching for, Newsome called on Montana State University microbiologist Gill Geesey to locate the pictured pools and collect samples.

From Geesey’s samples, Newsome determined that the blue came from a newly discovered pigment produced by the acid-loving alga Zygogonium ericetorum. The pigment is a complex of iron and the phenolic acid gallate. Newsome’s arduous efforts to determine its structure involved using Mössbauer and nuclear resonance vibrational spectroscopies to define the iron’s binding environment and developing an accurate liquid chromatography/mass spectrometry method for quantifying phenolic acids, antioxidants found in many plants.

“The organism probably uses this pigment as a sunscreen,” he said. The blue pigment might make a good dye or ink. But with a redox-active metal that could easily destroy expensive flavor molecules, it would be unlikely to appeal to the food and beverage industry, he said. 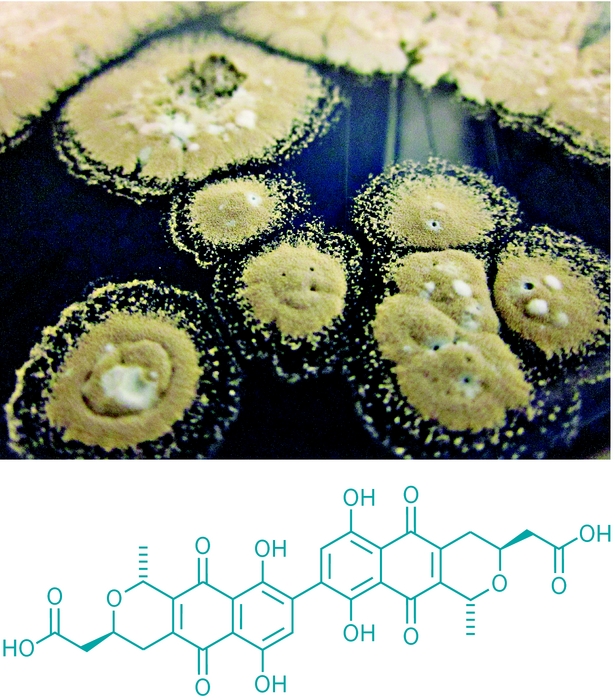 Newsome isolated novel analogs of the blue pigment shown from this marine-derived species of Streptomyces.

Newsome then went looking for blues closer to home—namely in the lab of UIC chemist Brian T. Murphy. Murphy, an avid scuba diver, collects samples from underwater environments and sifts through them for promising microbe-derived drug leads. Newsome noticed that some of those samples were blue. He chased down their pigments’ structures using mass spec and nuclear magnetic resonance. In Philly, he described the blue small-molecule pigments he’s found in the samples. Most are quinone- and indole-derived compounds similar to those that microbes use to wage chemical warfare, he noted. That raises potential toxicity flags for the compounds’ use in food or drink, he pointed out. He hasn’t given up, however, and continues to look for new blues from Murphy’s collections.

Meanwhile, Newsome’s most promising food-coloring lead has come from the intensely blue berries of a wild shrub native to Asia. Kusagi berries were at one time used to color textiles and foods in Japan. In 1978, a Nagoya University team proposed that the berries’ blue comes from the alkaloid trichotomine (Tetrahedron, DOI: 10.1016/0040-4020(78)80166-5). Japanese food ingredient firm San-Ei Gen later showed that the extracted blue is not acutely toxic to mice (Jpn. J. Food Chem.,2001,8, 174).

According to van Breemen, Newsome’s work is helping to better define the chemical scaffolds that nature uses to build blues. In Philly, Newsome noted that just seven scaffolds account for more than 95% of the blue small-molecule pigments known to exist in nature.

“Work like this helps us understand the chemical structure of blue in nature,” D. D. Williamson’s Lawson told C&EN. “Eventually that will let us expand our palette of natural food colors.”