Forensics: Thousands of drug samples tested by Annie Dookhan could be in question 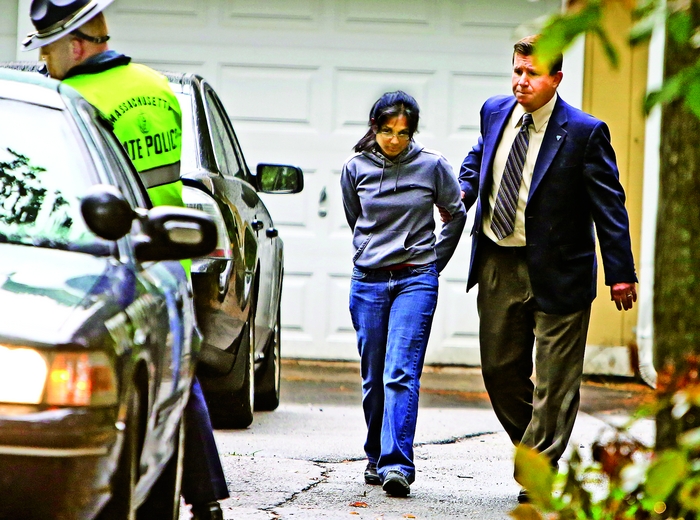 Credit: Associated Press
Dookhan is led to a police cruiser on Friday, Sept. 28.

Police arrested a Massachusetts forensic chemist on Sept. 28. Annie Dookhan allegedly tampered with drug evidence in criminal cases, forged colleagues’ signatures, and faked her academic credentials while working at a state crime lab. The unfolding investigation, which could upend thousands of narcotics convictions, has already led to the shutdown of the lab and the resignation of the state public health commissioner who oversaw it. 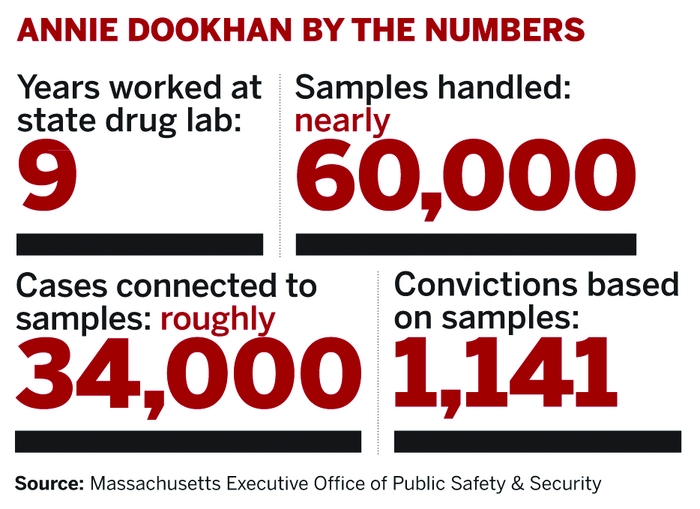 Dookhan, 34, was charged with obstructing justice by lying about the integrity of evidence, as well as about her academic qualifications. She is thought to have tested some 60,000 drug samples during her career at the William A. Hinton State Laboratory Institute, a state crime lab. “Annie Dookhan’s alleged actions corrupted the integrity of the entire criminal justice system,” Massachusetts Attorney General Martha Coakley said at a press conference.

According to a police report obtained by the Boston Globe, Dookhan told investigators that she forged coworkers’ initials on reports for mass spectrometer calibrations, intentionally contaminated samples, and engaged in “dry-labbing”—identifying narcotics by sight rather than by chemical analysis. In interviews with police, several colleagues said they’d expressed concern to supervisors about Dookhan’s unusually high productivity. Her résumé lists a master’s degree in chemistry from the University of Massachusetts, Boston, but she does not hold that credential according to school officials.

“This is a calamity,” says Justin J. McShane, a defense attorney in Harrisburg, Pa., who is closely watching the case. Because the evid­ence Dookhan allegedly mishandled was more than likely destroyed in the normal course of business, no traceable information exists to correctly characterize samples in thousands of drug cases, he explains.

“I don’t think this is going to end with a single chemist,” adds Edward P. Ryan Jr., former president of the Massachusetts Bar Association. Dookhan’s supervisors at best signed off on her work and at worst were complicit in her alleged crimes, he says. “This is an ever-expanding spiderweb, and I don’t know where the end is going to lie.”

Dookhan is an American Chemical Society member and a member of several ACS divisions, including the Division of Chemistry & the Law. Sarah P. Hasford, chair of the division, tells C&EN that it is a policy of the division not to comment on any pending litigation matters.

Dookhan pleaded not guilty in Boston Municipal Court on Sept. 28 and was released on a $10,000 bail. E-mails and phone calls to Dookhan have not been answered. Another hearing is scheduled for Dec. 3.

Read Supporting Documents For This Story

Partial transcript of 2009 testimony given by Dookhan (Source: WBUR Boston)

Share X
To send an e-mail to multiple recipients, separate e-mail addresses with a comma, semicolon, or both.
Title: Chemist Charged In Crime Lab Scandal
Author: Carmen Drahl
Chemical & Engineering News will not share your email address with any other person or company.

Comments
Gerald Morine (October 7, 2012 2:01 PM)
I have a couple of questions.
1. She had unusually high productivity. She was involved with 34,000 cases. Her evidence produced only 1100 convictions. What about the other 32,900 cases? Her dry-lab evidence wasn't convincing? Judges don't like convicting druggies in Massachusetts?
2. She claimed a Master's from UMass and got a job in Boston. They don't check credentials on hiring, even for schools down the street? When I was hired, they checked my resume in detail, pointing out a date from years ago I had misremembered and an acronym I had jumbled.
3. The work that was faked was mass spec runs. All you have to do is put it in a vial so the autosampler can inject it! Is that hard? Boring? These analytical labs should rotate their folks around to different jobs every year or so so they don't go bonkers from boredom!
Reply »

Gerald Morine (October 14, 2012 12:56 PM)
I think your comments lack insight. The article you are commenting on can't possibly have all the details in this human drama. Do your homework!
On the specifics:
1. Maybe her evidence was the ONLY evidence in 1100 cases. Isn't that a lot?
2. Is a master's degree an important criterion for an entry level job. Academics don't like to admit it, but a lot of employers don't differentiate between a BS and an MS.
3. Who says job boredom leads to ethical lapses? There have been a flurry of crime lab scandals around the country recently, but most can be attributed to decreasing lab headcounts, obsolete equipment, and management with little insight into the mind of an analytical chemist. As long as the US has drug laws, it is going to need forensic labs capable of producing unimpeachable results for 34,00 cases. That is going to require more money and more equipment and more highly-trained lab workers than politicians have been willing to deliver. If not, the result will be ever more of these scandals.
Reply »

Cosmo V. Sabatino (October 14, 2012 5:59 PM)
My only comments regarding this case are related to how the integrety of Chemists and the field of Chemistry will be negatively impacted with respect to falsifying data for personal gain, if she is found guilty. Chemists must uphold their code of ethics with respect to supplying accurate and reliable data in whatever positions they may hold, whether in the private sector or a government affiliation. This code of ethics must be upheld with respect to our overwhelming work loads and peer pressure to meet deadlnes by our superiors.
Reply »

Gerald Morine (October 15, 2012 5:35 PM)
The record shows that some people do, in fact, falsify data. A few are just sociopaths or psychopaths. Others, however, do so due to factors such as ambition or overwork or even boredom. A question worth asking, I think, is: Can an analytical lab be managed to minimize falsification by people doing it due to these lesser factors. Some practices are commonly used that are designed to discover errors in solutions, calibrations, and calculations, also uncover falsifications. However, the psychology of lab workers doing repetitious tasks for years on end, is minimal in the ACS items I read such as:

Perhaps I have overlooked something from CHAS, but I would (will) be surprised.
Reply »

Gerald Morine (October 16, 2012 2:37 PM)
Her resume is linked in the box of supporting documents just above the comments area.
It lists:
Education:
University of Massachusetts, Boston, Ma., Master of Science: in Chemistry, (present)
University of Massachusetts, Boston. Ma., Bachelor of Science in Biochemistry, 2001
Since her employer didn't verify her Masters, I suppose they didn't verify her BS either when she was hired. I don't think it is currently questioned, however. One can question, I suppose, whether a biochemistry degree is the best preparation for working in an analytical lab.
Perhaps the lab management thinks on-the-job training is most of what is required.
Reply »