After years of false starts, investment in cellulose-based ethanol may finally pay off for enzyme industry 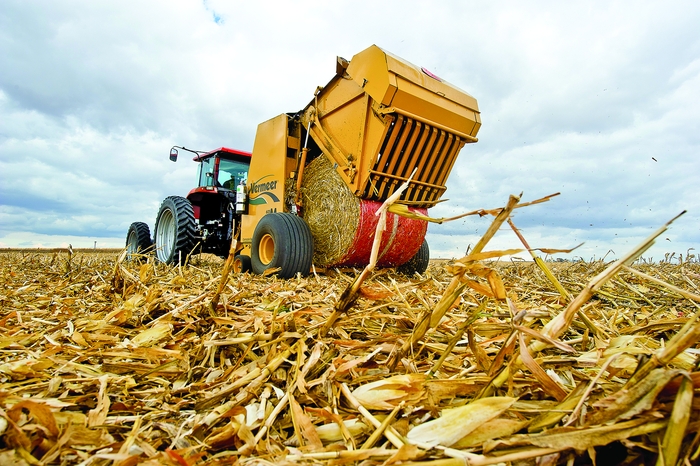 For 133 scientists and other workers at the biotech firm Codexis, the billion-dollar opportunity to sell enzymes to the cellulosic ethanol industry probably seems far off. They will be losing their jobs on Oct. 30 at the end of a multiyear enzyme research agreement with Shell.

The Codexis scientists were developing enzymes that can degrade cellulose into the sugars needed to make fuel ethanol. They and other scientists have pursued commercial production of cellulosic ethanol for decades now without much success. Despite several ambitious announcements over the years, no cellulosic ethanol plant of any significant size operates in the U.S.

Today, facilities are finally being built, and enzyme manufacturers are confident that they will start seeing a return on their many years and hundreds of millions of dollars of investment in enzymes for cellulosic biofuels. But managers aren’t going to celebrate until the “on” switch is thrown in a few big plants. And still unanswered is the question of the right business model for success in enzymes for cellulosic biofuels.

Enzyme companies are already quite familiar with ethanol, having benefited nicely from the rise of first-generation ethanol made from corn. Ethanol makers depend on glucoamylase enzymes to break down starch from corn and other crops into sugar for fermenting into ethanol. For Novo­zymes, the enzyme market leader, sales to the biofuels industry were more than $300 million last year.

Producing fuels from nonedible biomass such as corncobs and cornnstalks promises to be an even larger opportunity for enzyme manufacturers. Their customers need sophisticated cellulases and hemicellulases to release sugars from the lignocellulosic structure of such crops. The enzymes are expensive, and large amounts are required.

For many years, in fact, the enzymes were too expensive. Adam Monroe, president of Novozymes North America, recalls when the cost of enzymes was around $6.00 for every gallon of ethanol they helped generate. Then in 2008, the Department of Energy announced that it would put $34 million over four years into projects run by Novozymes and three other companies to lower enzyme costs.

It took only a year to get costs closer to $1.00 per gal, Monroe says, and companies have continued to plug away at cutting them further. In 2010, Novozymes launched what it considered its first commercial cellulosic fuel enzyme, Cellic CTec2. Last February, it came out with a third-generation product, CTec3, that Monroe says can convert cellulose into sugars at a cost of roughly 50 cents per gal of ethanol produced.

“We see it on a trend to ultimately get into the 30-cent-per-gal range,” he says. “The important thing is that enzyme costs are no longer the main economic point for producers.”

A division of the Danish company Danisco, Genencor, was another of the companies tapped by DOE to cut enzyme costs. After DuPont’s acquisition of Danisco in 2011, Genencor became part of DuPont Industrial Biosciences. Jan Koninckx, DuPont’s global biofuels director, confirms that DuPont has likewise gradually ratchetted prices down over the years.

“There wasn’t a breakthrough or something unique; it was many small things,” he says. “We did the hard work of enzyme development.” That included creating new catalysts and new active sites and improving protein engineering and other process technology to make production more efficient.

Today, DuPont’s leading enzyme product for cellulosic fuel production is Accellerase Trio. Launched in June 2011, it contains a “cocktail” of cellulases, hemi­cellulases, and other enzymes to break down complex carbohydrates into fermentable sugars.

DuPont and Novozymes are both marketing their enzymes to companies around the globe that want to convert cellulosic biomass into ethanol or other fuels. Most of them are motivated by government mandates and incentives. In the U.S., for example, Congress set a national mandate to produce 36 billion gal of biofuels and other alternative fuels annually by 2022. Of that amount, 16 billion gal is to be cellulose-derived.

With at least six deals in the past two years, Novozymes is clearly the leader in landing enzyme contracts with cellulosic ethanol firms, observes Jim Lane, who edits and publishes Biofuels Digest, an online newsletter covering the biofuels industry. “They’ve really got a lot of players lined up,” he says.

But perhaps in acknowledgment of that lead, Novozymes’ big chemical company competitors are taking a different approach. While Novozymes pushes enzymes, its competition is putting more skin in the biofuels game. These firms are becoming involved in making ethanol itself, with an eye toward licensing entire production packages. “It’s a competition between business models as much as it is a competition between enzymes,” Lane says.

Early this year, for example, the Dutch specialty chemical company DSM formed a joint venture with Poet, a major corn ethanol producer, to build a $250 million cellulosic ethanol plant adjacent to a Poet facility in Emmetsburg, Iowa. DSM will supply enzymes and yeast to ferment sugars into ethanol. The venture plans to license its technology to 26 other locations in Poet’s ethanol network so they can process both corn and corn residue supplied by area farmers.

DSM’s cellulase technology is not as fully developed as Novozymes’ or DuPont’s, according to Lane, but he says the company has vowed that its enzymes will be ready to go by the time the joint-venture plant starts up late next year.

In Nevada, Iowa, meanwhile, DuPont is spending some $200 million to build its own cellulosic ethanol plant. The company has started site preparation work, Koninckx says, and expects to complete the facility by the first half of 2014. It will draw on technology being developed at a demonstration facility that DuPont has operated since 2010 in Vonore, Tenn.

Developing ethanol technology makes sense, Koninckx says, because DuPont’s acquisition of Danisco gave it all the pieces of a fully integrated “field to fuels” package. The package starts with DuPont’s Pioneer seed business, brings in enzyme and fermentation technology from Danisco, and draws on DuPont’s deep chemical manufacturing expertise. “We are the only one in this field that has everything,” he says.

On the other end of the business spectrum from DuPont and DSM are the specialist enzyme developers Codexis and Dyadic International. Rather than having everything, they possess one very important thing—respected cellulase technology—but they offer little in the way of corporate heft or manufacturing assets.

Codexis, meanwhile, has spent the past six years in a research agreement with the oil giant Shell, which is one of the world’s largest distributors of corn-based ethanol and has also been exploring cellulosic ethanol. Since the agreement began, Shell has put roughly $250 million into enzyme R&D at Codexis.

Now that the deal has ended, Codexis has the right to sell its enzymes to any company anywhere, except in Brazil, provided it pays Shell a royalty. Codexis says it is negotiating with Raízen, a Shell joint venture, for Brazilian rights as well. Shell, meanwhile, can buy enzymes at a discount from Codexis or manufacture them itself using the Codexis technology. 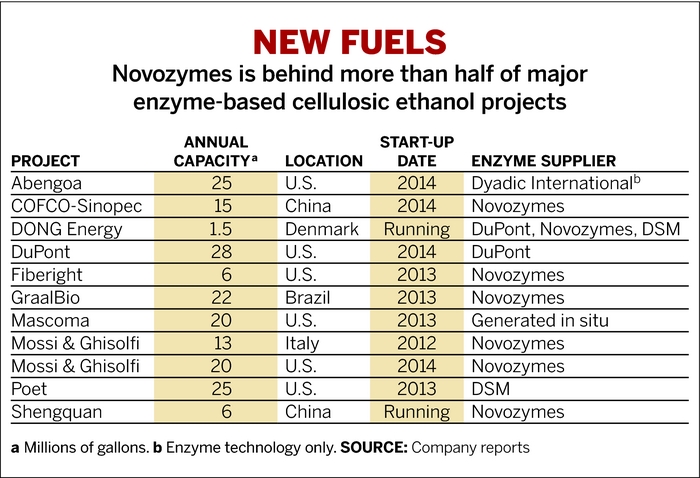 Codexis says the layoffs that accompany the end of the research agreement are unfortunate, but it maintains that the ability to approach the broader market with its CodeXyme enzymes holds great potential. “Codexis has developed some of the most cost-effective and competitively advantaged cellulase enzymes in the world,” Chief Executive Officer John J. Nicols said in announcing the changes. “Securing the rights to market these enzymes to advanced biofuels companies outside of Shell is a major milestone.”

Codexis tells C&EN that executives weren’t available to further explain its post-Shell strategy. As Lane sees it, Codexis had the misfortune of teaming up with a firm that, despite a large investment, didn’t pursue cellulosic ethanol aggressively.

“They don’t have a customer at this point,” he says of Codexis. “A 400-meter race has started. Everyone else is at the 100-meter mark, and they are at the start.”

All is not lost for Codexis, though, Lane figures. Raízen, the Shell ethanol venture in Brazil, may yet develop a cellulosic ethanol project that uses Codexis enzymes. And Codexis also has a venture with Italy’s Mossi & Ghisolfi to develop detergent alcohols from cellulose. Success there could lead M&G to consider Codexis as an additional supplier to its cellulosic ethanol projects, which Novozymes is signed up to supply.

Competitive jockeying aside, enzyme suppliers say they are confident that their customers can economically collect the necessary cellulosic raw materials and that they can supply robust enzymes to economically convert it into sugar. “Five years ago, I worried a lot about the technology. I don’t anymore,” DuPont’s Koninckx says. “I used to worry a lot about the supply chain. I don’t anymore.”

Koninckx worries a bit about the money DuPont is putting in the ground in Iowa. “It’s a risk, but we can accept it,” he says. What he and competitors such as Novozymes’ Monroe worry about most is the possibility that politicians will alter the Renewable Fuel Standard, the government program that spurred construction of cellulosic ethanol plants, in the U.S.

Having watched the eventual success of the traditional ethanol business, Biofuels Digest’s Lane expects that things will work out. “If corn ethanol is any indication,” he says, “once the technology becomes viable, there’s going to be a building frenzy.”

Business
Long-Awaited Cellulosic Ethanol Plant Opens In Iowa
Business
DSM Joins Poet In Biofuels Push
Environment
Potholes On The Road To Renewable Fuels
Share X
To send an e-mail to multiple recipients, separate e-mail addresses with a comma, semicolon, or both.
Title: Enzymes Poised For Cellulosic Success
Author: Michael McCoy
Chemical & Engineering News will not share your email address with any other person or company.