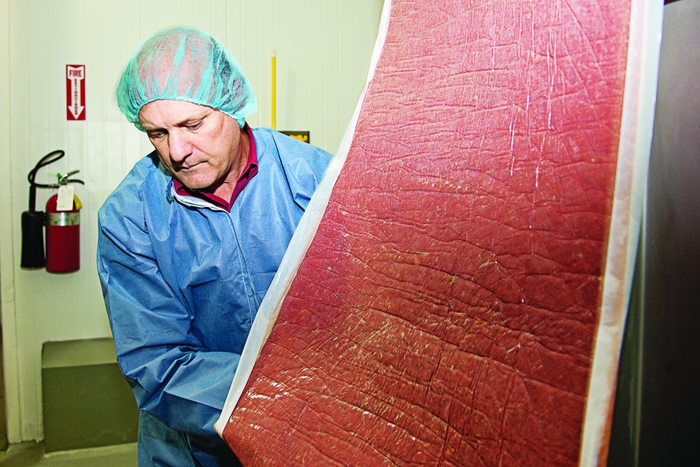 Credit: Roger Teel/Army
Miles of meat: FPL Food is producing sheets of osmomeat for the Army.

Military food engineers have a tough job. Just try designing meat that can sit on a shelf for three years and still taste good.

That’s what Tom Yang does at the U.S. Army’s Combat Feeding Directorate. The food Yang creates will someday become part of an MRE (Meal, Ready-to-Eat) that soldiers take on combat missions.

Beef jerky is popular among the troops, but it’s excessively salty and gets brittle after just one year, explains Yang, a food scientist at the Natick Soldier Research, Development & Engineering Center, in Natick, Mass.

To find an alternative to jerky, Yang had been investigating osmotic dehydration. That process pulls the water out of meats using osmosis, in the same way brine replaces water in a pickle.

Yang had tested several ideas when he saw the answer on an exhibit hall table at a food science meeting: a meat version of a popular kids’ snack, the Fruit Roll-Up. The osmomeat process was designed by the Association pour le Développement de l’Institut de la Viande, a French nonprofit funded by both the French government and the meat industry. Yang decided osmomeat would be a good fit for the military. 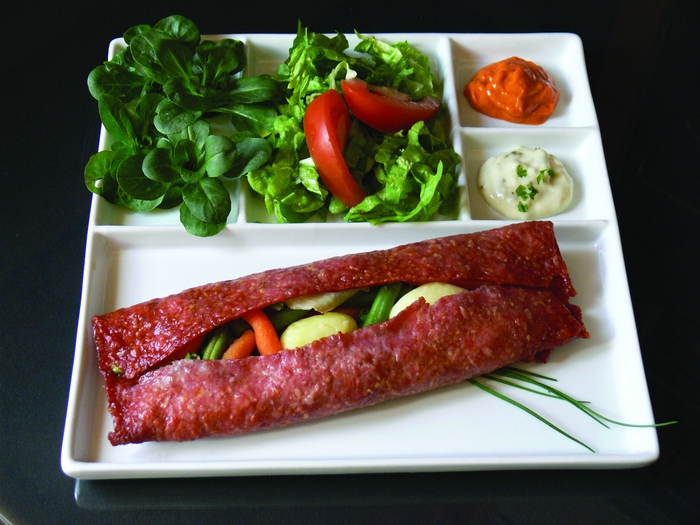 What makes the nonprofit’s process unique is how it prepares the meat. The institute molds ground meat into thin sheets. It then runs the meat sheets on a conveyor belt through a molasses-like brine of 80% maltodextrin. The result is a meat roll-up that’s semidry, stable for years—and completely raw.

The key is that the meat is highly acidic, with a pH of around 2. The final product has a pH of 4.6 or 4.8, which is acidic enough to keep bacteria from growing even after months of sitting on the shelf.

The resulting meat sheet has a lot of potential, Yang says. You can toast it to make a lunch meat or jerky, smoke it like barbeque, or eat it as the French do: raw. And the process works with almost any ground meat: beef, pork, chicken, even seafood.

“The meat itself is quite bland, but since it starts with ground meat, you can add spices—chipotle, teriyaki, barbeque—even vitamins, minerals, antioxidants, all of this good stuff,” Yang adds.

Yang brought the technology to the Georgia meat-processing company FPL Food, which is now creating some osmomeat recipes for the Army.

So it might not be long before you spot a seafood roll-up in an MRE near you.

A while back, Newscripts described the newly established Golden Goose Awards, which were designed to recognize important research discoveries that at first glance appear ridiculous (C&EN, July 2, page 80). The first awards were presented last month at a ceremony on Capitol Hill.

When Golden Goose winner Charles Townes came up with the original idea for a laser, many people told him it wouldn’t work. “Fortunately, I was an associate professor then, and they couldn’t fire me just because I was dumb,” Townes says in a video about the awards (see the clip at http://cenm.ag/gg1). At the time, Townes had funding from the National Science Foundation and the Office of Naval Research to do basic research on atoms and molecules.

Other Golden Goose winners include Eugene White, Rodney White, Della Roy, and Jon Weber, whose basic research on tropical coral led to the development of bone-graft material, and Martin Chalfie, Roger Tsien, and Osamu Shimomura, whose studies of the chemicals that make certain jellyfish glow led to the widespread use of green fluorescent protein in research.

Given such stiff competition, it seems unlikely that the meat roll-up will make the cut for next year’s prizes.