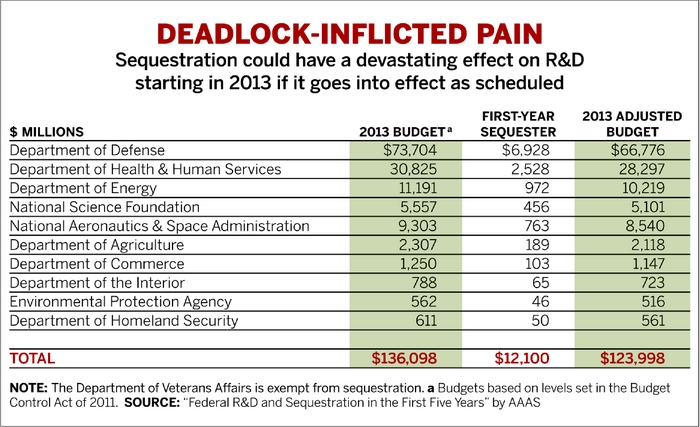 Federally funded R&D faces $57.5 billion in budget cuts over the next five years if the first half of decadelong, mandatory across-the-board reductions, called sequestration, takes place as scheduled.

The cuts could send R&D funding at many federal agencies to its lowest levels in a decade, according to a new analysis from the American Association for the Advancement of Science (AAAS). For instance, the budget of the National Aeronautics & Space Administration would hit levels not seen since the 1980s.

“The impact of this sequester would be truly devastating to the American scientific enterprise,” says Alan I. Leshner, chief executive officer of AAAS.

Much has been made of the first year of sequestration, which will begin on Jan. 2, 2013, unless Congress makes a deal to replace the plan. But few studies have looked at the ramifications on R&D if the cuts continue each year for 10 years, as currently laid out in the Budget Control Act of 2011.

AAAS has tackled this long-term impact question. In an analysis that focuses on the ramifications of the first five years of cuts, it makes clear that the cost of sequestration would be high. AAAS limited its examination to five years to be able to adjust for inflation using data through 2017 from the White House Office of Management & Budget.

“Sequestration is really a long-term challenge,” says Matt Hourihan, director of AAAS’s R&D Budget & Policy Program. “We wanted to get a better sense of how these cuts could affect science funding beyond just next year.”

For example, the National Institutes of Health, part of the Department of Health & Human Services, faces a total of $11.3 billion in cuts over the first five years of sequestration. Elsewhere, the Environmental Protection Agency could lose $213 million and the Department of Energy could be out $4.6 billion.

These cuts and others across the government are the result of a last-minute agreement in August 2011 that allowed the U.S. to raise its debt limit. In exchange, members of Congress agreed to come up with a plan to cut $1.2 trillion from the federal deficit over the next decade.

The Budget Control Act set up a bipartisan congressional commission, referred to as the supercommittee, to come up with an agreement on what combination of budget cuts and tax hikes would achieve the set cuts. Sequestration was the “stick” to force the bipartisan commission to come up with a deficit reduction plan; it was never meant to be implemented. But when the supercommittee members could not reach an agreement, it went into effect.

Now, almost every defense and non­defense discretionary program—including all agency R&D activities—across the federal government is facing cuts that range from 7.6 to 9.1% annually for a decade. Mandatory programs, including Medicaid, Medicare, and Social Security, are exempt or face smaller cuts.

Under sequestration, agency budget cuts do not compound. Instead, the budgets get cut each year from a base number set in the Budget Control Act that remains nearly flat at 2013 levels. The result is that agencies are effectively pitching in a portion of their budgets each year for 10 years to bring down the deficit.

For example, the National Science Foundation’s average annual budget over the first five years is $5.6 billion, assuming congressional appropriators hold all discretionary accounts flat to mirror the overall cap set by the law. Each year of this period, it would lose an average of $421 million to deficit reduction, for a total five-year loss of $2.1 billion, according to AAAS.

COST OF SEQUESTRATION
[+]Enlarge
Over the next five years, federal agencies will have thier budgets reduced by various amounts depending on whether defense programs are included or excluded. NOTE: Cuts are in constant dollars. The Department of Veterans Affairs is exempt from sequestration. SOURCE: “Federal R&D and Sequestration in the First Five Years” by AAAS

Over the next five years, federal agencies will have thier budgets reduced by various amounts depending on whether defense programs are included or excluded. NOTE: Cuts are in constant dollars. The Department of Veterans Affairs is exempt from sequestration. SOURCE: “Federal R&D and Sequestration in the First Five Years” by AAAS

In the first year of sequestration, almost every program at every federal agency would face a cut as mandated by the law. But for future years, the law is not as specific, so agencies would likely have more control over what programs to reduce or eliminate, Hourihan points out.

Sequestration comes at a time when many observers already fear that U.S. R&D is falling behind. Overall federal funding has been flat or slightly declining for the past decade, aside from a one-time boost from the 2009 economic stimulus package.

Sequestration would make that situation worse, says Steven Fluharty, senior vice provost for research at the University of Pennsylvania. The university received $900 million in R&D awards in 2012, 80% of which came from the federal government. He estimates that sequestration could cost the university $50 million to $60 million per year in research funding and more than 1,100 jobs.

“Significant advances with enormous potential could erode very quickly,” Fluharty says. “We recognize that these are challenging times, but we need to approach this in an evidence-based fashion and not with a blunt instrument.”

Sequestration could also do irreparable harm to the cause of attracting students into science and keeping talented young scientists in the workforce, Leshner says. “We know that at the NIH, the average age of a first grant is 42,” he says. “Imagine where it will go if we make it even more difficult” to get those first grants.

In addition to its analysis of sequestration as currently enacted, AAAS examined a second—admittedly less likely—plan that would exempt defense programs from the automatic cuts. The House of Representatives has passed such a plan, but the Senate and the White House have shown little support for it.

Under this scenario, research and regulatory agencies would face massive cuts of 17.5% each year, according to the AAAS report. That would mean total five-year losses of $26.1 billion at NIH, $5.9 billion at DOE, and $4.9 billion at NSF, for example.

The AAAS report also includes a breakdown of the five-year impact on all federal R&D spending for each state. This analysis assumes defense programs are not exempt. California takes the largest hit by far, losing $11.3 billion over five years, followed by Maryland, Virginia, Massachusetts, and the District of Columbia.

The University of California system would undoubtedly bear much of California’s burden, with its 10 university campuses, including research powerhouses UC Berkeley, UCLA, and UC San Diego, as well the national labs it operates for DOE.

In a letter last month to the California congressional delegation, UC President Mark G. Yudof laid out sequestration’s effect on the university system. In just the first year, UC would lose more than $335 million in federal support for research; financial aid for thousands of UC students, including 80,000 who received Pell Grants in 2012; and $21.5 million in Medicare revenues to the UC health system.

J. Gary Falle, UC’s associate vice president for federal governmental relations, thinks that the Administration and Congress recognize the potential destruction that sequestration could cause. In fact, some in Congress are issuing such warnings (see page 26).

“I believe that when the Budget Control Act was passed, adopted, and signed, the threat of sequestration was out there, but nobody was thinking it was really going to happen,” Falle says. “But we are within 90 days of it happening, so it is getting pretty close to going into effect.”