When meeting Kathryn C. (Kitty) Hach-Darrow for the first time, you wouldn’t expect that this petite, grandmotherly figure—with a charismatic laugh and a smile as sweet as cotton candy—has a fierce tenacity and formidable work ethic. These qualities helped propel the small water analysis company she cofounded in 1947 with her late husband Clifford Hach into a multi-million-dollar chemical corporation.

“She exemplifies everything that we think of when we think of an entrepreneur—someone who takes risks, who throws themselves into their idea and their company 200%, and ultimately creates jobs and improves the quality of life,” says Madeleine Jacobs, executive director and chief executive officer of the American Chemical Society.

Kitty spoke with C&EN, a few weeks before her 90th birthday on Oct. 20, about her role in starting Hach Chemical Co., accelerating its growth, and the sacrifices she made along the way. 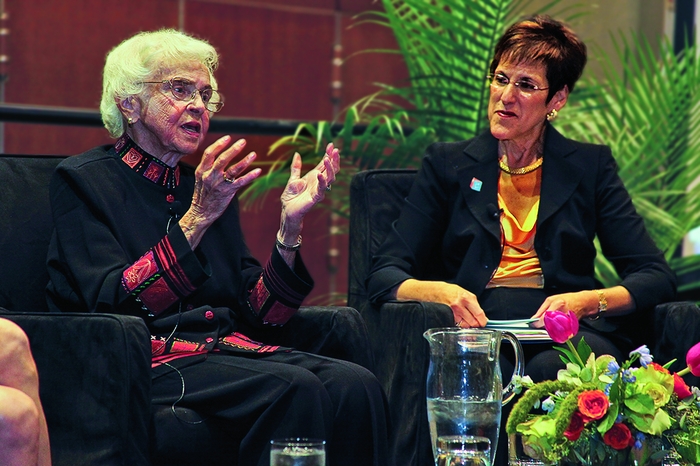 The Hach Chemical Co.’s story starts when Kitty met Clifford while they were both students at Iowa State University. “I knew right away that this guy was going to build a chemical company,” she says. “He didn’t care how big Dow was or how big DuPont was, he was going to build his own company.” The couple married in 1943.

Clifford received $15,000 from the sale of a patent, and with that, the couple bought an acre of land in 1947 in Ames, Iowa, and constructed a three-room cement building, which formed the basis of Hach Chemical Co.

In the first two years, the company sold unknowns for quantitative analysis to university chemistry departments, but sales were flat. The big break came in the company’s third year, in 1949, when it developed a simple water analysis test kit based on ethylenediaminetetraacetic acid, more commonly known as EDTA. The Total Hardness Test Kit, Model 5-B, measured water hardness via titration.

Clifford repackaged the liquid reagent into a powder, and Kitty came up with the idea of mailing samples of the product, along with the nontechnical test procedures, to potential customers, including municipal water treatment plants. In one year, their sales grew from $5,000 to $15,000.

The couple took the company public in 1968, and by then it had annual sales of more than $1.5 million. In the early 1970s, they added a second site in Loveland, Colo., to house R&D, instrumentation production, and the corporate headquarters.

Kitty acknowledges that being an entrepreneur can come at a cost. The company “was everything for us,” she says. “We never took a vacation. We went to shows and we did a lot of traveling, but we always traveled for the company. We were absolutely giving it all we had.”

In fact, the couple’s three children, Bruce, Mary, and Paul, literally grew up with the business because for many years they lived in an apartment attached to the original building in Ames.

“In entrepreneurism, there’s a risk,” Kitty notes. “Yes, the risk is money, but there is a bigger risk when you’re an entrepreneur: You sometimes neglect the children you brought into this world. I worked very hard at trying to raise the kids and do my responsibility at the chemical company.”

After Clifford died in 1990, Kitty and her son Bruce took over the company and continued to expand internationally. In 1995, she married Donald Darrow, a retired airline pilot.

In 1999, Kitty and Bruce sold the company to Danaher, which has maintained it as one of its divisions. That same year, Hach Chemical Co.’s total sales reached $150 million.

To give back to the chemistry community, the Hach family started the Hach Scientific Foundation in 1982 to promote chemistry education by awarding scholarships. In 2009, the foundation transferred its assets to ACS, which continues the foundation’s educational programs (C&EN, June 8, 2009, page 7). Kitty recently funded a new ACS award, the Kathryn C. Hach Award for Entrepreneurial Success (see page 44).

Although the overall environment for starting a chemical company was much different when Kitty and Clifford were building Hach Chemical Co. than it is now, some things never change. As Kitty puts it: “An entrepreneur has to love, and I do mean love, what they are doing.”