ANGEL INVESTING
[+]Enlarge
Internet and health care deals accounted for more than half of transactions in the first six months of 2012. NOTE: Deals are valued at a total of $468 million and includes coinvestors. SOURCE: Halo Report by Angel Resource Institute, Silicon Valley Bank, CB Insights’ 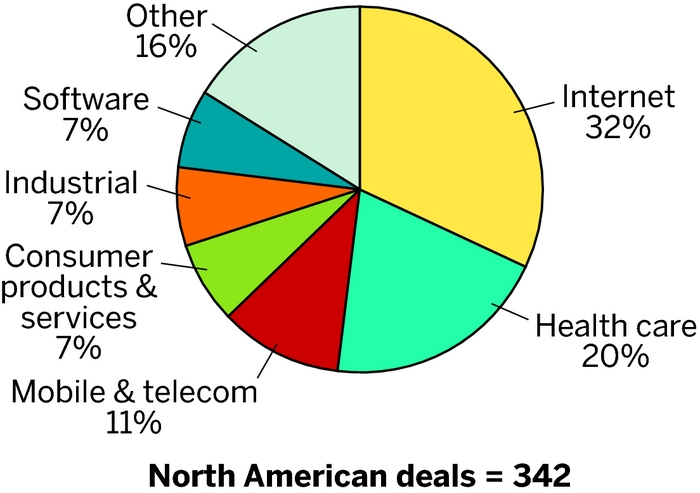 Internet and health care deals accounted for more than half of transactions in the first six months of 2012. NOTE: Deals are valued at a total of $468 million and includes coinvestors. SOURCE: Halo Report by Angel Resource Institute, Silicon Valley Bank, CB Insights’

Founded just five months ago, CAN is a group of high-net-worth individuals with a background in chemistry. They have linked up through CAN to gather intelligence and share insights on potential investments, explains Mark Vreeke, one of the network’s founders.

Angel investors come in at a very early stage of a new company’s life, typically providing up to $100,000 in seed money to help launch it. Venture capitalists come in at a later stage as a new business gathers momentum. They are often in a position to provide start-ups with millions of dollars raised from wealthy individuals and institutions.

Vreeke, who has a Ph.D. in chemistry from the University of Texas, Austin, and is an entrepreneur-in-residence at venture capital firm Elevate Ventures, got the idea for CAN after hearing a talk in March at the American Chemical Society national meeting in San Diego about the society’s programs to help chemist entrepreneurs. The speaker, Ken Polk, a special assistant for innovation and legal affairs to ACS Executive Director and Chief Executive Officer Madeleine Jacobs, mentioned just how difficult it is for entrepreneurs to get early-stage financing.

Vreeke says he and retired chemist Sid White started talking after Polk’s speech and joined up to start the network. White, an inventor with a Ph.D. in inorganic chemistry from Texas Christian University, says chemists are uniquely positioned to understand both the science of a chemistry-related start-up and the financial challenges it faces.

CAN hopes to offer early-stage chemistry-related firms a lot more than just money. “We’ll be able to offer help on the technical and business side,” Vreeke says, “and we’ll be able to provide connections to the rest of the chemical industry.”

Seven investors so far have signed up with the network, and both men say they are looking for more investors to join. Unlike in the usual angel group, where investors pool money, each CAN member decides individually whether and how much he or she will invest of their own money in a deal.

The goal is to have enough members to cover the country, so that at least one member is within 50 miles of a company CAN invests in. That way, Vreeke says, a member can easily make a personal visit to assess and assist a company the group is backing.

The CAN cofounders have set up a website where entrepreneurs can submit business plans and request funding. The site, ChemicalAngels.com, allows members to meet in virtual space and discuss potential transactions.

The network is somewhat unique in its national focus. Angel investing is often done on a regional basis “and with very little focus on chemicals,” says Judith Giordan, who is a partner in the venture capital firm ecosVC and has headed R&D at Henkel, PepsiCo, and International Flavors & Fragrances. The Halo Report, by the Angel Resource Institute and its partners, categorizes deals in broad groupings such as health care, consumer products, and industrial without a mention of chemistry.

Despite the terminology, many of the deals that angel investors and venture capitalists fund are science- or chemistry-related, Giordan points out. Biotechnology, pharmaceutical, and energy-related start-ups couldn’t get off the ground without chemistry. But “chemistry is not a buzzword today that people love,” she acknowledges.

Giordan, who is a CAN adviser as well as a member, says now is the right time for chemistry-related start-ups. First, universities are eager to spin off businesses based on academic research. Second, retired scientists with the investing bug are “ready to risk a little and help start-ups become more than concepts,” she says. With her husband, Giordan herself has acted as angel investor in four chemistry- or biology-related companies.

And last, in today’s slow economy, many mid- and late-career scientists are looking for jobs, and many recent science graduates can’t find them. A healthy environment for start-ups should increase their chances of finding work, Giordan says.

CAN has received requests for funding from pharmaceutical and biotech start-ups but is now only in the early stages of evaluating and finding appropriate investments, White says. The group held its first meeting in August at the ACS national meeting in Philadelphia, drawing about a dozen entrepreneurs and a few investors.

Although the network has no official standing within ACS, Vreeke expects that its members will continue to gather at the twice-yearly national meetings. The group, he says, expects to draw both investors and entrepreneurs from ACS membership.

“It takes money and time to get a chemistry or life sciences deal launched,” Vreeke says. Because chemists are uniquely positioned to patiently mentor and in some cases finance those deals, “I see a real need for a chemical angel network,” he says.