Sketching The Life Of Joseph Black

MAN OF LETTERS
[+]Enlarge
Credit: U.S. National Library of Medicine
Joseph Black in an engraving by J. Rogers after a portrait by Sir Henry Raeburn. 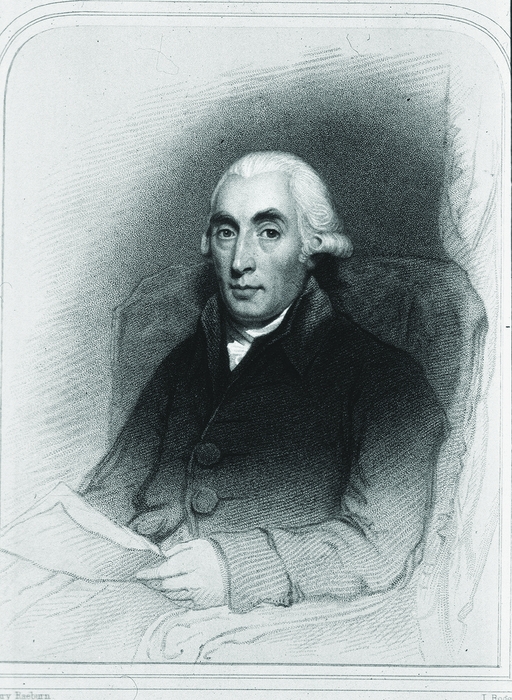 Credit: U.S. National Library of Medicine
Joseph Black in an engraving by J. Rogers after a portrait by Sir Henry Raeburn.

Joseph Black looms large in 18th-century chemistry. His theory of latent heat, a change in a system’s heat content at constant temperature, marks the beginning of the study of thermodynamics. Black also discovered carbon dioxide, which he called “fixed air.”

The discoveries for which Black is best known were made during the years from 1752 to 1766, yet Black conducted chemical research for nearly 50 years. Now, a new publication of his correspondence sheds light on the remainder of Black’s career.

Black, a Scottish physician and chemist, spent his working life as a professor, first at the University of Glasgow starting in 1756. In 1766 he moved to the University of Edinburgh, where he taught until his retirement in 1795. Because of the nature of his best-known discoveries, Black has been labeled as a purely academic chemist. But the collection of correspondence reveals that he took a keen interest in Scotland’s developing chemical industry in the 1700s.

“We’d call him a chemical consultant today without a doubt,” says Robert G. W. Anderson, who edited the collection, “The Correspondence of Joseph Black” (U.K.: Ashgate Publishing, 2012), along with the late Jean Jones, a historian of geology. “I think what the letters reveal is that he was, in fact, a very significant applied chemist,” Anderson says. “No one has really looked at this tremendous boost he gave to the chemical industry in Scotland between 1766 and 1799, the year of his death.”

Many of the letters gathered in the two-volume collection are from wealthy Scots seeking Black’s advice on matters as diverse as metal extraction, glassmaking, sugar refining, bleaching, fertilizers, and vinegar production, Anderson says. “He corresponded freely with the aristocracy, who were doing their best to improve their land, their industrial enterprises, and their bank balances.”

For example, Lord Kames wanted to know how he could drain his land, thus sparking Black’s interest in the water-retaining properties of clay. The Earl of Hopetoun wrote to Black asking how he might extract the lead, copper, and silver from the ore on his estate in western Scotland. Lord Dundonald wanted to manufacture tar by distilling coal at Culross on the north shore of the Firth of Forth. “All wrote to Black and got carefully considered replies, including analyses of samples that had been sent to him,” Anderson says.

All told, the collection includes 835 documents. There are 355 letters written by Black himself and hundreds of letters from his correspondents, including French chemist Antoine-Laurent Lavoisier, Scottish architect Robert Adam, English potter Josiah Wedgwood, and Scottish inventor James Watt, who was a close friend of Black’s. The publication also includes Black’s will and lists of his household accounts.

It’s a collection that has taken Anderson at least two decades to assemble. But it’s something that Anderson—who is currently vice president of Clare Hall, a college at England’s Cambridge University; chairman of the Society for the History of Alchemy & Chemistry; and vice chair of the Chemical Heritage Foundation—has been thinking about since the 1970s.

In 1970, after completing a Ph.D. in chemistry at England’s Oxford University, Anderson took a job at the Royal Scottish Museum, in Edinburgh. As part of his work, he came across a collection of chemical apparatus from the 18th century that had been donated to the museum in 1858 but had never really been studied.

“It was a treasure waiting to be looked at,” Anderson recalls. After close examination, he determined it was equipment that Black had used to teach chemistry during his time as a professor in Edinburgh. And so began Anderson’s interest in Black.

He came across Black’s correspondence in the University of Edinburgh library in 1971. Anderson recalls the year with precision because he recently unearthed one of his own letters to his parents in which he told them that he’d found Black’s letters and that they “really need looking at.”

Anderson thought the correspondence should have its own published edition. After all, there hasn’t been a biography of Black since the one written by William Ramsay, discoverer of the inert gases, published posthumously in 1918. But the years between his discovery of the letters and their publication have been busy ones for Anderson. He became director of the National Museums of Scotland in 1985 and was director of the British Museum from 1992 to 2002. They were demanding jobs, Anderson points out, but with the help of Jones, he was always doing a little work on Black’s correspondence. 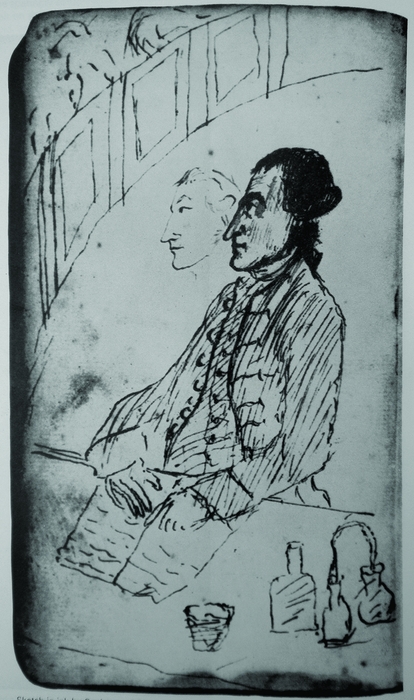 In addition to the letters he found at the University of Edinburgh library, Anderson found Black’s letters to Watt in the city library in Birmingham, England, where Watt settled after befriending Black at the University of Glasgow. There were a number of letters and family papers in the public record office in Belfast, Northern Ireland, where much of Black’s family lived and where Black attended school until he was 16. Finally, the Huntington Library in California held a large collection of letters.

Anderson believes Black certainly wrote more than the 355 letters in the collection. He hopes he’s compiled all that survive. But the worst thing about publishing correspondence, he says, is that just when the book comes out someone can show up with letters you didn’t know existed.

Because Black rarely published his work in scientific journals, some people think that he was lazy, Anderson says. “But I think if you read the letters you’ll find a completely different picture. He’s working every day in his laboratory. He’s giving lectures five or six days per week for a period of five months of the year. It doesn’t strike me that he’s particularly lazy.”

There are several letters from Black’s colleagues urging him to publish, particularly his work on latent heat, which others began to take credit for. Watt, for example, wrote to him, saying, “I cannot bear to see so many people adorning themselves with your feathers.”

“It may be that Black was confident that he had done enough to establish his reputation, or perhaps he cared little whether he left a legacy in print,” Anderson remarks.

Although the collection sheds light on Black’s work as a chemist, Anderson says it doesn’t reveal much about his personal life. “He was a very private man, and if there were letters of a social nature, they must have been destroyed,” he says. “There are touches of Black that show he was an interesting cultural figure. We know that he played the flute, for example. Later in life he took up the violin. It’s been said that he had a rather good singing voice.”

Black was a lifelong bachelor, and it’s worth noting that the collection holds only 10 letters Black received from women and just six that he wrote to women. “I don’t think he ever formed any close relationship with any particular woman,” Anderson says. 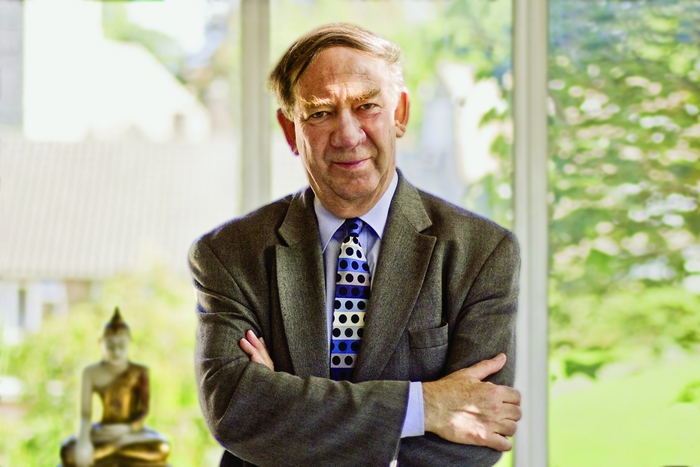 Black also didn’t like travel. “He said on one occasion that he could only sleep in his own bed,” Anderson notes. Furthermore, Anderson could find evidence of only one trip Black made outside of Scotland during his years in Edinburgh, in 1788 when he traveled to Ireland and England.

Even so, his lectures were hugely popular and were often attended by hundreds of people. He was known throughout the academic world, not only in Britain but also in continental Europe and North America. “People came from far and wide to hear him lecture,” Anderson says. Many were members of the general public, among which “there was a much greater thirst for scientific knowledge at the end of the 18th century, I’d suggest, than even today,” Anderson points out.

Arnold Thackray, chancellor of the Chemical Heritage Foundation, notes that although Black is a fixture in any history of chemistry course, he has always been something of a shadowy figure. “Through determined effort over the decades, Anderson has brought Joseph Black back to life and shown the enormous influence of this central figure in chemical history, in the British Industrial Revolution, and in the Scottish Enlightenment.”

Synthesis
Berlin exhibit features alchemical oddities from around the globe
Education
Bodily Bookbinding, Chemistry For Mummies
Physical Chemistry
The Drama Of Chemistry
Share X
To send an e-mail to multiple recipients, separate e-mail addresses with a comma, semicolon, or both.
Title: Sketching The Life Of Joseph Black
Author: Bethany Halford
Chemical & Engineering News will not share your email address with any other person or company.