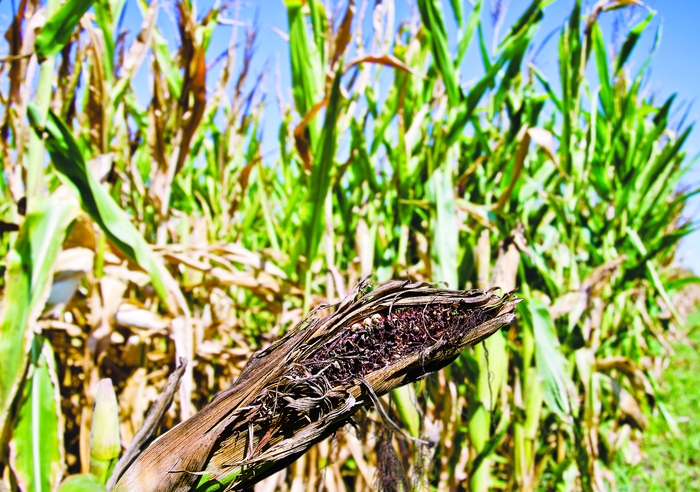 Within the next month, the Environmental Protection Agency will complete its examination of more than 2,400 comments weighing in on whether the agency should eliminate, modify, or leave alone a federal requirement that ethanol be added to gasoline.

The so-called Renewable Fuel Standard (RFS) put in place a trajectory for renewable biofuels to enter the market. It has been a blessing for corn farmers, who have increased crop production to meet the growing need for ethanol. But the drought gripping the nation’s heartland is reducing corn yields, fueling the explosion in the price of corn. A chorus of chicken, hog, and cattle producers who use corn for animal feed is crying foul because the price of corn has nearly doubled over the past three years.

As a result of the low corn yield and high corn prices, a bevy of concerned individuals and groups has asked EPA to waive this year’s RFS requirement. Those calling for an RFS waiver contend that it will reduce corn demand and lower prices for other users.

The RFS requirement to produce and use renewable fuel feedstocks was first carried out as part of the Energy Policy Act of 2005 and was expanded by the Energy Independence & Security Act of 2007. The goal of these laws was for U.S. motorists to burn more renewable, nonfossil motor fuels and therefore reduce carbon dioxide emissions, cut U.S. oil imports, and provide a new fuel crop market for U.S. farmers.

Under the RFS, the amount of renewable fuels to be refined will grow from today’s 13 billion gal to 36 billion gal by 2022 along a phased schedule. Of this, 15 billion gal can use corn kernels as a feedstock. The other 21 billion gal is to be made from feedstocks other than corn. The lion’s share of this 21 billion gal—16 billion gal—is expected to use cellulosic materials for feedstock.

Currently, about 45% of the U.S. corn crop goes to fuel, another 40% is used directly for animal feed, and the rest is used for other human food, seed, and industrial uses, according to the Department of Agriculture.

Cellulosic feedstocks would end the fuel-food conflict and ease the plight and anger of animal farmers. However, technology and processes that use cellulosic material remain at pilot levels, and although several large cellulose-based refineries are under development, none are operating.

The quest for the waiver was kicked off in mid-August by letters from the governors of Arkansas and North Carolina. They have been joined by requests from seven other governors, along with 26 senators and 150 members of the House of Representatives as well as many livestock, poultry, and other animal producers. Also backing the waiver is a mix of other groups, such as the American Petroleum Institute and the American Fuel & Petro­chemical Manufacturers, that oppose ethanol and the RFS.

This year’s drought has brought pain to the farm community. Because of the conditions, USDA expects this season’s corn harvest to be 17% below projections made earlier this year and 13% below last year’s harvest. Total U.S. corn production is expected to be about 10.8 billion bushels, the lowest level since 2006–07. Per-acre corn yields are expected to plummet to a 17-year low of 123 bushels per acre, 26% less than projections made just last June. This combination of reduced yield and high demand has led to record corn prices.

“The crippling ongoing drought, which is the worst in at least 50 years, has devastated the supply of corn and other grains,” says the North American Meat Association in comments to EPA. The group is seeking an immediate waiver of the ethanol requirement for this year and parts of 2013. Some 94% of animal feed is corn, the meat association says, and because of the demand for ethanol and the drought-driven reduced yields, livestock producers are going out of business and reducing the sizes of their herds and flocks. The association predicts a ripple effect of increased prices for meat, milk, and poultry throughout the U.S. economy.

On the other side of the debate, a broad group of biofuel companies, corn growers, environmental groups, and corn-growing states supports retaining the RFS for a host of reasons—some economic and some environmental.

For example, the Renewable Fuels Association, a trade association of biofuel refiners, calls the waiver requests “procedurally incomplete, legally insufficient, and factually flawed.” It blasts its opponents for “blatantly” ignoring the fact that the ethanol industry has already reduced production in the face of the increased price of corn feedstock, adding that enough flexibility exists in the regulation to adjust to market conditions and that the ethanol requirement is a “proven success.”

Somewhere between the corn farmers and livestock ranchers is the Union of Concerned Scientists, a science-based nonprofit that has been active in the debate. UCS supports the renewable fuel mandate, it says in its comments to EPA, because the RFS reduces the nation’s oil use and the carbon intensity of its fuel supply.

UCS urges a “modest” reduction in the mandate on the order of 15% less ethanol for 2013. That reduction would allow current corn stocks and inventories to slowly increase, offering some price relief for ranchers. But UCS acknowledges that the ethanol infrastructure is already in place, and it doubts that even a full waiver would lead to greatly reduced ethanol production.

However, the organization cites several studies showing that a full waiver could reduce investments needed to develop non-corn-based cellulosic ethanol production facilities by undermining regulatory certainty that the government will stay in the game and continue to support ethanol.

EPA is obligated to respond to the request by mid-November, 90 days after it received the first petition seeking a waiver. EPA has set the waiver bar high: Petitioners must show that the RFS is “severely harming the economy or the environment of a state, region, or the U.S.”

If EPA refuses to grant the waiver, drought-resistant crops will become even more important than they are now. Monsanto, DuPont Pioneer, and Syngenta are the primary companies that are developing and selling hybrid drought-resistant corn seeds.

Monsanto is also introducing a small-scale pilot of its genetically engineered drought-resistant corn in western Great Plains states from South Dakota to Texas, company officials say. It is the only genetically engineered drought-resistant seed approved by USDA. Some 250 farmers will be involved in the trial, which could include plantings of up to 10,000 acres.

For now, all parties are waiting for EPA to make its decision. But if history is an indicator, relief to the standard is unlikely. EPA denied the only other RFS waiver request, which was made in 2008 by the governor of Texas. The agency said Texas failed to show that the state’s economy was being harmed by the ethanol mandate. In this instance, Gov. Rick Perry sought a 50% waiver of the volume requirement for 2008–09, singling out high corn prices and economic hardships for livestock and poultry farmers—similar conditions to those cited in August. Corn prices were at historically high levels in 2008, at about $4.00 per bushel. Today, prices are nearly $8.00 per bushel, according to a weighted average provided by USDA.

In rejecting Gov. Perry’s request, EPA said it required the demonstration of a “high threshold” of severe harm. The agency added that a successful waiver request would have to show that “implementation of the mandate itself would severely harm the economy; it is not enough to determine that implementation of RFS would contribute to such harm” (EPA’s emphasis).