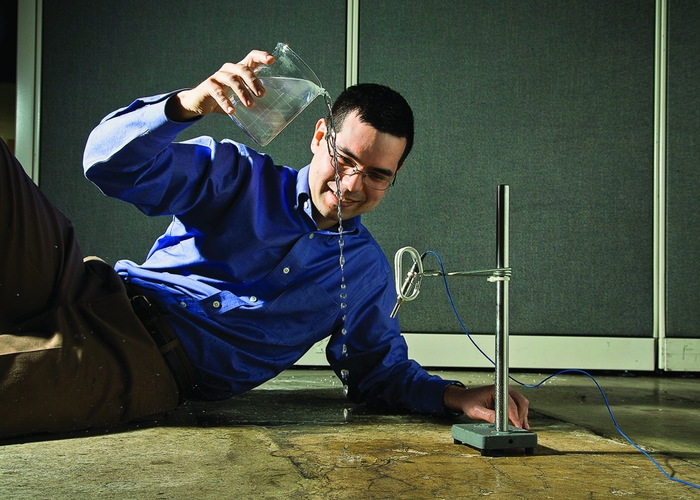 Bands have groupies. Bridges have Brian Mazzeo and W. Spencer Guthrie. The two Brigham Young University engineering professors have spent years recording the structures’ acoustic performances, and as a result, they have discovered a new non­invasive method for evaluating the structural integrity of bridges.

According to the researchers, water serves as a great medium for listening in on bridge jam sessions. By pelting bridges with drops of H2O and recording the resulting sounds with a microphone and data-logging equipment, infrastructure evaluations can be easily performed, the researchers report (NDT & E Int., DOI: 10.1016/j.ndteint.2012.05.007). The newfound method builds on a common diagnostic assessment known as impact-echo testing in which bridges are struck by items such as hammers and chains so that the resulting sounds can be studied to detect cracks in infrastructure. Although such tests can be useful, they are also invasive and require lane closures that impede traffic.

To circumvent such problems, Mazzeo and Guthrie considered the idea of pelting bridges with a disposable object, which would allow for evaluations that were quick and inexpensive. The problem was determining which disposable object would work best.

“After some failed initial tests, one evening I took a beaker of water and dumped it over some flaws in the concrete floor of my lab,” Mazzeo tells Newscripts. “I could clearly hear the differences between intact and flawed concrete, and that’s what prompted us to investigate the use of droplets further.”

Given water’s soft touch, the researchers note that H2O-based impact-echo testing could also serve as a useful diagnostic test for aircraft.

Credit: Courtesy of Anthony Fernandez
Paint by number: Team poses with elements 1 through 118.

After conducting an impact-echo test on their private jets, Newscripts readers may want to fly over to Merrimack College, in Massachusetts, to catch a bird’s-eye view of the world’s largest periodic table. Unveiled in late October, the table measures 216 feet by 130 feet and was constructed from the type of paint typically used to line football fields.

The monumental achievement is the brainchild of religious and theological studies professor Warren A. Kay, who thought the table would help highlight his school’s commitment to science education as well as to its new science and religion minor, for which Kay teaches.

Faculty and students from a variety of majors, including chemistry, engineering, biology, and the visual and performing arts, joined in the effort, constructing stencils and painting rectangles and symbols for all 118 elements onto a campus field. “It was a real interdisciplinary effort,” Kay says.

Unfortunately, the achievement has not come without setbacks. According to chemistry professor Jimmy Franco, coleader of the project, Guinness World Records will not recognize the table because it is made from paint and not a paper-based product as Guinness had assumed when it first approved the idea. What’s more, the table’s paint is starting to fade, especially since Superstorm Sandy’s recent visit to the Northeast.

Nevertheless, the table is still garnering plenty of attention. “Lots of people on campus are excited about it,” Kay says. “Lots of science students are having their pictures taken on the periodic table next to their favorite element.”