Under attack by toxic seaweeds, corals summon help from a friendly fish 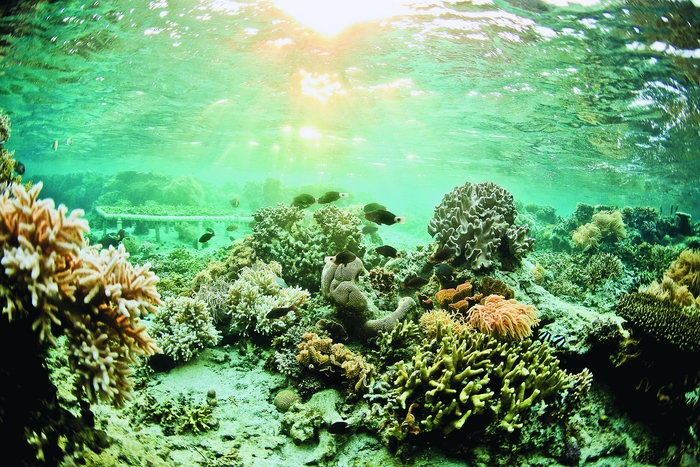 Goby fish may not seem like great underwater warriors, but when it comes to protecting corals from poisonous and invasive seaweeds, the pretty little reef dwellers are an essential line of defense. 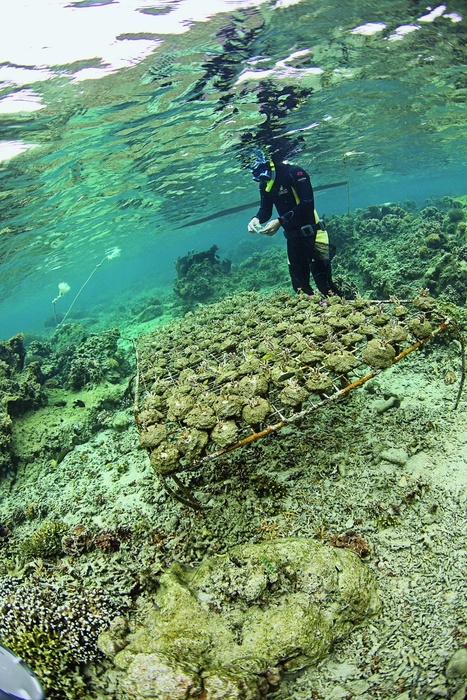 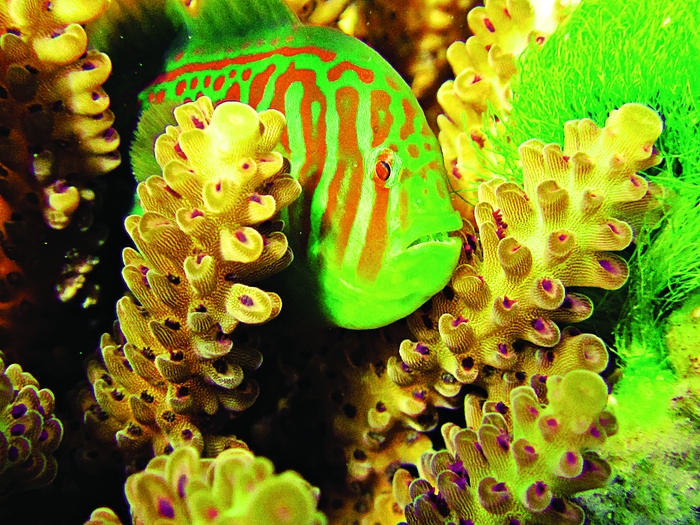 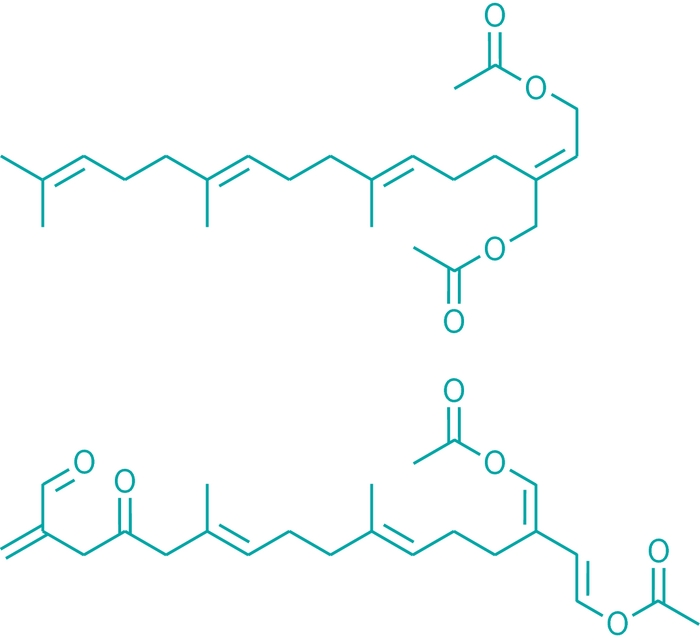 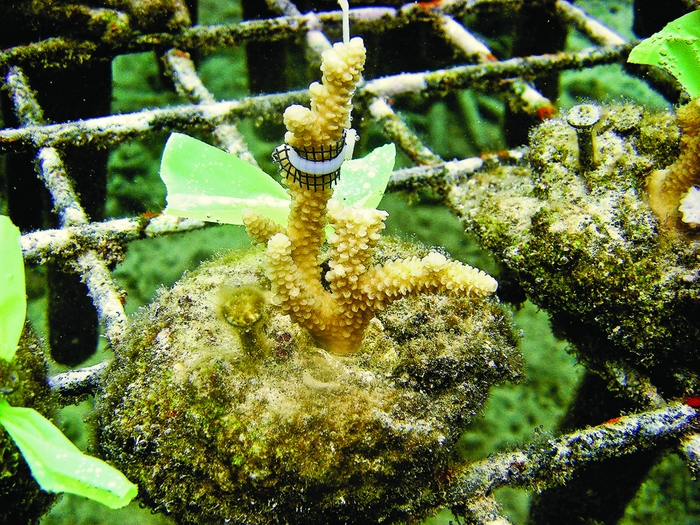 In experiments on Fiji’s coastal reefs, the coral A. millepora is exposed to the harmful seaweed G. filamentosa, which produces the two toxic loliolide derivatives shown.

Earlier this month, a paper in Science reported that 3-cm-long goby fish called Gobiodon histrio respond to a chemical distress signal given out by the coral Acropora nasuta when it comes into contact with poisonous seaweed called Chlorodesmis fastigiata. The goby fish save the day by eating this toxic seaweed—which most reef fish deliberately avoid—so that it cannot hurt its coral host (DOI: 10.1126/science.1225748).

This is more than just a straightforward case of goby homeland security. The goby is defending Acropora coral, a genus that is among the first coral to die when a reef is under duress from environmental stressors such as ocean acidification. This kind of coral is also important for reef architecture, providing “the structural complexity that attracts everything else on the reef,” says Mark E. Hay, a marine ecologist at Georgia Institute of Technology who worked on the project with his postdoc Danielle L. Dixson.

Over the past 30 years, coral cover decreased by about 80% in the Caribbean and by about 50% along Australia’s Great Barrier Reef, Hay says. At the same time, seaweed, a form of large algae, has flourished in many of these weakened reefs, says Robert Warner, a marine ecologist at the University of California, Santa Barbara. A healthy coral reef will have only about 0 to 3% seaweed, but under duress, many of these “beautiful underwater habitats become seaweed-covered parking lots,” Hay adds.

“There’s this argument among coral reef people about what’s killing the coral: Is it bleaching, pollution, overfishing, global warming?” Hay says. “The answer is that it is probably all of those things, and they all lead to more algae and less corals and more contact between corals and algae.”

Marine researchers worldwide are trying to understand the antagonistic relationship between corals and seaweeds on compromised reefs. But Hay is one of a few researchers searching for the chemical cues involved in the coral-seaweed battle.

Working in coral reefs off the coast of Fiji, Hay’s team has isolated toxic chemicals that seaweed unleashes on corals. The researchers have also investigated how the behaviors of different reef fish populations—such as the goby—are sensitive to chemical cues produced by organisms on the reef. Hay’s work to untangle chemical communication on coastal reefs shows that the battle between coral and seaweed is more complex and has “broader impacts than we had previously thought,” comments Robert S. Steneck, an oceanographer at the University of Maine.

Hay started studying Caribbean coral reefs in the late 1970s and watched them degrade dramatically before moving his research to Fiji in 2004. The South Pacific research initially involved searching for natural products in coral reefs that might one day be inspiration for blockbuster drugs. But he became increasingly interested in the chemical ecology of coral-seaweed interactions as the coastal reefs he was studying became more inundated with macroalgae.

In 2008, a review paper on coral reef management cowritten by Steneck and Peter J. Mumby of the University of Queensland, in Australia, called on researchers to investigate whether seaweed actively contributes to coral demise or whether it is just an opportunistic actor in evolving reef dramas (Trends Ecol. Evol., DOI: 10.1016/j.tree.2008.06.011).

The team eventually found that direct contact with many other seaweed species can lead to coral death. “In both the Caribbean and the Pacific, we could show that some of the seaweeds were actually toxic to corals and killed them or damaged them in a fairly short period of time, but this was almost always limited to areas of direct contact,” Hay says, because the poisonous compounds are hydrophobic and typically are located on the seaweed’s surface. To get a better idea of how toxic seaweeds might damage corals they touch, Hay’s team set up an underwater experiment. Dozens of A. millepora corals were put into physical contact with a range of seaweed species, from the terpene-wielding ones that cause coral photobleaching and tissue death within a few days, to more benign species that don’t seem to cause much harm to corals even after weeks of contact.

Then the team compared the changes in coral gene expression before and after seaweed contact. The results were a surprise, Hay says. They expected that the greatest amount of gene expression would occur in corals that had come in contact with the most toxic algae, revealing a valiant attempt to fight off the harmful algae, followed by death.

The likely explanation, Hay says, is that corals can readily deal with the threats posed by seemingly benign seaweed. For example, the coral’s changing genes were those involved in the stress response to protect cells, repair cellular damage, and maintain metabolism.

As for contact with the more harmful seaweed: One possibility is that the coral doesn’t have the inherent ability to fight back against the seaweed, Hay says. Another is that the seaweed is sneaking in like a Trojan horse and causing damage before the coral can mount a defense.

Either way, the coral A. nasuta has figured out a way to produce a chemical flare to attract goby fish to the site of first contact with C. fastigiata seaweed, Hay notes. His team captured water near an A. nasuta coral just as it was put in contact with this seaweed. Goby fish moved quickly toward the water they collected from the contact zone as well as recently attacked coral. Meanwhile, the goby weren’t attracted to the team’s controls, including fake seaweed plants made out of green nylon in contact with the coral.

Hay’s team hasn’t yet been able to identify the chemical panic flare made by the coral to attract the goby’s help. But the researchers are working to see if chemical signaling between different goby fish species and their coral homesteads is universal. “There are a bunch of gobies that associate with a bunch of corals,” Hay says. “I don’t think this chemical communication is going to be unusual.”

Hay’s results help explain a common, worrisome observation about reefs in distress. Namely that once seaweed takes over on a reef, it is very difficult for the corals to recover. Hay suggests that coral larvae trying to grow may encounter poisonous seaweeds that kill it before the coral can grow up—or grow big enough to recruit defensive goby fish. Hay and Dixson have shown that “coral recovery could be hampered or slowed by the absence of that fish’s facilitating behavior,” Steneck comments.

To figure out which fish are essential for seaweed suppression and thus coral recovery, the team is also assessing which other reef fish eat toxic seaweed. Hay has found that most of the toxic seaweeds found in Fijian reefs are eaten by one or a few of the 25 species of herbivorous fish found there. “Because the different fish have different and sometimes non-overlapping diets, it means that to control different seaweeds on the reef and to keep them from killing the corals, or overgrowing the corals, or making it harder for corals to recover from other damages, you have to maintain the diversity of fish,” Hay says.

More generally, Hay’s team is trying to look much more at the odor cues involved in recruiting fish to coral reefs. This past summer his team began to study whether juvenile fish in search of a reef to call home could tell by smell whether one was healthy or overrun with seaweeds. For example, water from protected marine areas, which are typically free from seaweed, is normally very attractive to young fish, Hay says. But if seaweed that flourishes in dead zones is placed in such waters, juvenile fish no longer find the water enticing.

The broader take-home message from Hay’s work is that helping underwater seaweed parking lots return to healthy coral reefs requires a complex and diverse cast of corals and fish, whose interactions and mere presence on a reef are mediated by chemical cues.

Although many researchers are focused on coral recovery, only a handful study molecular aspects of coral-seaweed interactions. One is Guillermo Diaz-Pulido, at Australia’s Griffith University, who is untangling the chemical and biological mechanisms by which Acropora corals become more sensitive to seaweeds at ocean acidification levels predicted in the coming century.

The field is wide open for chemical ecologists to tease apart these tangled networks, Hay says. And in doing so, he adds, they can figure out how “small, inconspicuous fishes have effects considerably larger than their mass would predict.”

Pollution
Satellites can now see air pollution inequality within cities
Persistent Pollutants
Goodbye to some PFAS in food packaging
Pollution
Mercury makes it deep into marine trenches
Share X
To send an e-mail to multiple recipients, separate e-mail addresses with a comma, semicolon, or both.
Title: The Coral-Seaweed Battleground
Author: Sarah Everts
Chemical & Engineering News will not share your email address with any other person or company.