Three months into the Curiosity mission on Mars, the rover is carefully collecting samples and testing, but real science is still ramping up 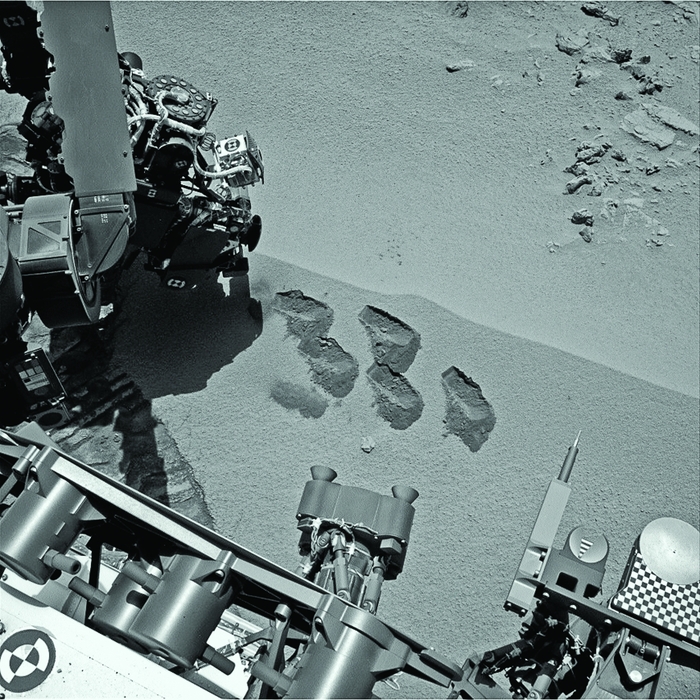 It’s been more than three months since the National Aeronautics & Space Administration’s rover Curiosity landed inside Gale Crater on Mars with fully equipped chemistry laboratories and a mission to search for evidence of past life.

The craft’s tricky landing was flawless and stunning (C&EN, Aug. 13, page 7). And since then, information about the rover’s first movements, robotic arm unfurlings, atmospheric sniffings, and dirt scoopings have come to us via frequent NASA press conferences. But as of yet, no major discoveries have hit the airwaves.

It’s difficult to persuade a public accustomed to instant gratification that anything is worth the wait. But hungry as we are for data now, wait we must. The success of the $2.5 billion, two-year mission depends on the robust, remotely directed performances of an incredibly complex collection of spectrometers, cameras, lasers, and sensors.

Curiosity “might be the most technically sophisticated thing ever built,” says David Blake, senior research scientist at NASA Ames Research Center in Moffett Field, Calif., and principal investigator of the rover’s collection of spectrometers known as CheMin. “The engineers are being very risk-averse. They don’t want to break anything.”

In fact, teams of engineers have been slaving away at test beds at NASA’s Jet Propulsion Laboratory and Goddard Space Flight Center, where they practice maneuvers on duplicate versions of the rover and some of its instruments, some of them even housed in Mars-like environments.

“It is really, really intense,” says Blake, who spent several months observing the nonstop, coordinated activity of test engineers at Jet Propulsion Laboratory. “I’ve never seen anything like it—50 engineers in the room almost acting as a living organism.”

So far, the rover’s robotic arm has taken five scoops of soil from the rover’s recent resting place, Rocknest. Some of the material was deposited into ovens in the Sample Analysis at Mars (SAM) instrument suite, which contains a mass spectrometer and gas chromatograph. Curiosity also found mysterious bright flecks of material in the soil, detected little methane in the local martian atmosphere, and discovered that local martian soil is similar to basaltic material.

Mission scientists may at last be approaching some pay dirt: At a press conference on Nov. 15, Ashwin R. Vasavada, deputy project scientist of the Mars Science Laboratory, reported that Curiosity is in the process of analyzing a sample of martian dirt using both CheMin and SAM instruments, “which is really what the mission is about,” he says. But as of that date, results were not yet in.

The rover’s first big scientific targets, however, are rocks in a location dubbed Glen­elg, where several geological formations intersect. Curiosity arrived at the outskirts of Glenelg, which is about 330 feet from Rocknest, a few weeks ago. And that project of drilling and depositing samples into the instruments will take engineers still more days of practice, adjusting for rock angles and rover placement, Blake says. “They just don’t want to make a mistake.”