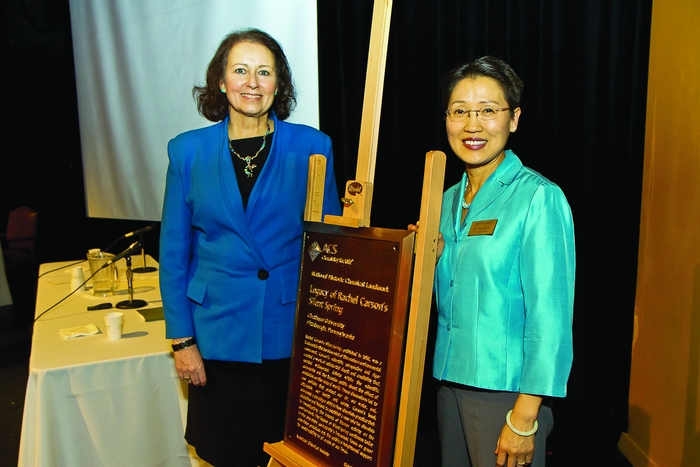 Credit: Chatham U
Jackson (right) presents the plaque to Xu.

Rachel Carson’s 1962 book, “Silent Spring,” which is widely credited with launching the modern environmental movement, was designated a National Historic Chemical Landmark by the American Chemical Society during a ceremony in Pittsburgh on Oct. 26. The event took place during the Rachel Carson Legacy Conference at Chatham University.

“ ‘Silent Spring’ led to a paradigm shift of great significance that set the stage for the more sustainable science we practice today,” said Nancy B. Jackson, immediate past-president of ACS, who presented a plaque honoring Carson’s book to Wenying Xu, vice president of academic affairs for Chatham.

Carson, a scientist, writer, and environmental activist, earned a degree in science from Chatham (then known as Pennsylvania College for Women) in 1929 and a master’s degree in zoology from Johns Hopkins University in 1932. She died in 1964.

In “Silent Spring,” Carson challenged the widespread indiscriminate use of agricultural pesticides and argued for stricter governmental regulation of chemicals. She explained how indiscriminate application of agricultural chemicals, pesticides, and other modern chemicals was polluting streams, damaging bird and animal populations, and causing severe medical problems. Carson’s conclusions were based on extensive research that incorporated information from dozens of scientific reports, interviews with leading experts, and materials from multiple disciplines.

“We have allowed these chemicals to be used with little or no advance investigation of their effect on soil, water, wildlife, and man himself,” Carson wrote in her book. “Future generations are unlikely to condone our lack of prudent concern for the integrity of the natural world that supports all life.”

The book contributed to the creation of the Environmental Protection Agency and the passage of numerous laws protecting the environment and human health, including a ban on domestic use of the potent insecticide DDT in 1972 as a result of its widespread overuse and harmful impact on the environment.

Carson’s work continued to have profound implications for the practice of chemistry, including the advent of green chemistry and the design, development, and implementation of chemical products and processes that reduce or eliminate the use or generation of substances hazardous to human health and the environment.

During the conference, the ACS Committee on Environmental Improvement hosted a panel on “The Impact of ‘Silent Spring’—Fifty Years of Chemistry Practice.” Panelists discussed perspectives on the evolution of the practice of chemistry in academic, industrial, and public arenas over the past 50 years.

ACS initiated the Chemical Landmarks program in 1992 to enhance public appreciation for the contributions of the chemical sciences to modern life in the U.S. and to encourage a sense of pride in the practitioners of those sciences.

The program has awarded landmark status to more than 70 places, discoveries, and achievements in the history of chemical science and technology. Other advances recognized through this program include the world’s first synthetic plastic, the discovery of penicillin, and the development of Tide laundry detergent. For more information about the program, visit www.acs.org/landmarks.

Pollution
Satellites can now see air pollution inequality within cities
Persistent Pollutants
Goodbye to some PFAS in food packaging
Pollution
Mercury makes it deep into marine trenches
Share X
To send an e-mail to multiple recipients, separate e-mail addresses with a comma, semicolon, or both.
Title: Landmark For ‘Silent Spring’
Author: Linda Wang
Chemical & Engineering News will not share your email address with any other person or company.