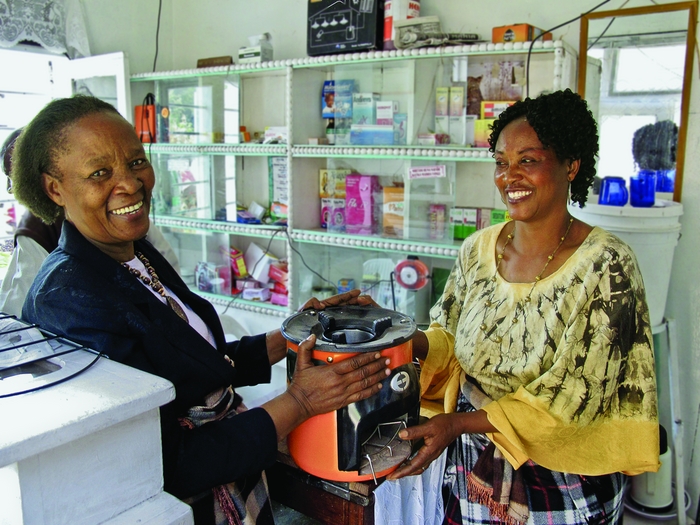 Credit: Envirofit
Women in Tanzania show off a cooking stove made of a metal alloy Oak Ridge National Laboratory and Colorado State University designed for Envirofit.

Federal research agencies have prepared their first-ever five-year plans to guide how they transition scientific discoveries into the private sector.

This forward-looking examination of federal technology transfer efforts was done at the behest of President Barack Obama. In October 2011, Obama issued a memo requesting that the federal research agencies create plans to push more lab research out to companies in an effort to help the economy. According to the memo, the plans need to include metrics for evaluating tech transfer and streamlined processes to facilitate the movement of research out of agencies’ labs.

“Any time that tech transfer is raised to the level of the President, it is very exciting,” says Karina Edmonds, the technology transfer coordinator at the Department of Energy. The directive “is not by accident because, in the country’s current economic situation, people see the value of tech transfer to capitalize on federal research investments.”

The President’s memo didn’t dictate how the agencies should go about doing technology transfer but instead allowed each agency to create a plan based on its own expertise. Individual plans lay out specific goals for each agency for 2013–17. As of last week, 13 plans from agencies with research efforts were available to the public.

Companies frequently grumble about the red tape of working with government, says Paul R. Zielinski, director of the Office of Technology Partnerships at the National Institute of Standards & Technology, but these plans aim to fix that. “One of the primary things we are challenged to do by the President—and you see this throughout all of the plans—is ask, ‘How do we make it easier for businesses, especially small businesses, to get access to federal technologies?’ ”

Official technology transfer programs grew out of a 1980 law that required federal agencies to make the technologies that their labs develop available to businesses.

In the decades since, agencies have accomplished this in a variety of ways, ranging from licensing to companies patents on federal research to working directly with companies to develop technologies. But whether those programs are doing all they can to work with industry is hard to determine.

For example, the number of patents federal labs obtain on their work is an important starting point, but simply patenting technology doesn’t mean that it will make its way out of the lab or into the private sector.

Complicating the evaluation is that it can take years to know whether a tech transfer venture has been successful, so a yearly snapshot rarely shows the full range of effort. “We think of technology as being really fast, but most technologies take seven to 15 years or longer to get going,” Shipp says.

The report led by Shipp lays out several factors that can be used to determine whether a program is generally successful, ranging from the amount of industry-lab interaction to the tech transfer policies of individual agencies. As one example, DOE labs are seen as particularly successful, in part because tech transfer is one of the goals written into lab operators’ contracts.

A federal lab’s overall mission can have a big impact on the amount of tech transfer it does. Some labs, like those at the Department of Agriculture, are more likely to do research with direct applications for industry. Others are more focused on basic science, so tech transfer opportunities are not as obvious. The amount of classified research that a lab does also needs to be taken into account.

But one of the most important influences on the success of tech transfer is the focus it receives from agency heads or lab directors, Shipp says. “Tech transfer is an unfunded mandate, so funding comes out of overhead,” she explains. “Many lab technology transfer offices have minimal resources, especially if the lab director is not aware or supportive of tech transfer.”

That is where the presidential memo has been particularly important, says Richard J. Brenner, who recently retired from the Office of Technology Transfer at USDA. It didn’t give agencies new authorities or more money, but it did bring tech transfer to the attention of top management.

“It elevated the importance of tech transfer. No one had ever said that before,” Brenner points out. “This is ultimately about innovation in the U.S. and our global competitiveness.”

Brenner worked on a White House panel convened to examine ways that federal research could help improve the economy and create jobs. That group recommended the five-year plans to help push the government’s internal research into the public sector.

In addition to requiring measurable goals—something most federal agencies didn’t have before, according to Shipp’s report—the President’s memo asks for moves to streamline the tech transfer process ﻿and create more local and regional partnerships. It also requests that all federal tech transfer opportunities be made available on one website.

Many of the agencies used the five-year plans as a reason to take a look at their whole operation. “We have a very successful office, the largest for biotechnology, but we are always looking for opportunities to improve what we do,” says Mark L. Rohrbaugh, director of the Office of Technology Transfer at the National Institutes of Health, which supports tech transfer programs for intramural research at the 27 NIH institutes and centers as well as the Food & Drug Administration.

NIH set up working groups to improve the flow of information internally and make communication between departments more efficient. It also created new ways to make sure companies know about opportunities to collaborate with NIH and FDA, including through social media. “Our aim is to improve public health, ultimately, so we want to make sure that our agreements are consistent with that mission,” Rohrbaugh says.

Now the agencies just need to implement their plans and make sure everyone is on board. That’s one reason the tech transfer team at NIST was made up of senior-level leaders, Zielinski says. The message that tech transfer is important comes from the top and “filters down to every person that works in that organization,” Zielinski says. “If you tell the scientists that this is an important part of their mission, they will appreciate that, and they will do it.”