TYING THINGS UP
[+]Enlarge
Monoterpenes were long known to cyclize through carbocation intermediates (top). But now, researchers have discovered an enzyme that catalyzes such reactions by reduction followed by Diels-Alder or Michael addition chemistry. 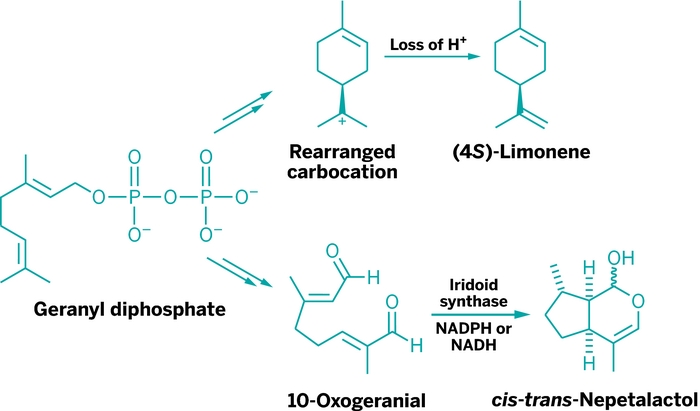 Monoterpenes were long known to cyclize through carbocation intermediates (top). But now, researchers have discovered an enzyme that catalyzes such reactions by reduction followed by Diels-Alder or Michael addition chemistry.

Iridoids include nepetalactone, the component of catnip that drives felines blissfully crazy, and the aphid sex pheromone nepetalactol. They are also important building blocks for a potent group of anticancer agents called monoterpene indole alkaloids.

The new synthase will permit researchers to make a whole host of iridoids through biotechnology, instead of relying on synthetic chemistry or extraction to acquire useful quantities of the cyclic terpenes, says Jonathan Gershenzon at the Max Planck Institute for Chemical Ecology in Jena, Germany.

“Researchers have been chasing [the new enzyme] for a very long time because iridoids are so widespread,” Gershenzon says. “People knew the reaction involved some kind of reduction and obviously cyclization, but how these two processes were coupled was a mystery.”

The new iridoid synthase cyclizes monoterpenes in two main steps, Geu-Flores explains. The precursor 10-oxogeranial undergoes a traditional reduction to form an enol intermediate, which then cyclizes through either a Diels-Alder cycloaddition or a Michael addition. “We haven’t figured out which one it is—both are possible,” Geu-Flores says. He adds that very few enzymes catalyze Diels-Alder cycloadditions, but it is possible that iridoid synthase is an unusual example of one that does.

The enzyme’s mechanism of cyclization also extends classic terpene chemistry. Many students learn about the biogenic isoprene rule made famous by Leopold Ruzicka, who won the 1939 Nobel Prize in Chemistry. The rule states that “terpenes are assembled from chains of isoprene units in reactions that include cationic intermediates called carbocations,” notes Joseph Chappell, a plant scientist at the University of Kentucky, in a commentary about the work (Nature, DOI: 10.1038/nature11754). But iridoids defy the Ruzicka rule, Chappell adds, “because their biosynthesis could not be deduced from conventional carbocation chemistry.”

Next up, the John Innes team is working to get plants to produce insect iridoids. Namely, they want tobacco plants to produce aphid sex hormone so farmers can grow a row of decoy plants that would entice the agricultural pests away from important crops.

The research team is also digging deeper into the mechanism of iridoid cyclization. Because the first step involves reduction and many enzymes catalyze reductions, the team is investigating whether other enzymes can be evolved or engineered to cyclize terpenes.